Seoul was our final stop on the Asian leg of our journey. Though we were very much intending to have a Korean experience, what we ended up having was something of a mashup between typical American pastimes and unique Korean culture.

Our four day stay included a pro baseball game, an amusement park, a zoo (sort of..), and lots and lots of food! (Oh, and visits to Taco Bell and Costco…) If everything wasn’t in Korean, you might have thought we were right back home given our itinerary. This wasn’t totally intentional - I blame (give credit to?) one particular blog list I found on the internet of fun things to do in Seoul that led us in these directions. Thanks to its guidance, we had some hilarious adventures and Seoul was definitely a different experience than the rest of our time in Asia. Here are a few of the highlights:

Lotte World is kind of like a Disney World-type amusement park with two cute chipmunks as it’s mascots (Lotty and Lorry, if you’re wondering). Lotte World is owned by Lotte Group, which is a Korean-Japanese conglomerate that seems to own a whole lot in Seoul (fun fact: their 95-year old founder was recently jailed for embezzlement…). There are “Lotte” buildings everywhere in Seoul - Lotte Marts, Lotte Hotels, Lotterias (fast food joints), etc. We found cheap “foreign visitor” tickets to the park online and decided to give it a try.

One of Lotte World’s unique features is that it is the “largest indoor theme park in the world”. I don’t have much to compare it to, but it was pretty big (4+ stories of rides, shows, and food in an area comparable to a large mall, plus a pretty big outdoor section). There were some of the typical rides, like swinging boats, roller coasters, and haunted mansions. And then there were some of the more unusual attractions - a “hot air balloon” that takes you around the perimeter of the indoor space, or the indoor ice skating rink on the basement level. Most striking (though expected), was that nothing was in English. This meant that we had little understanding of the narrative during Sinbad’s escape or the safety instructions before departure on the hot air balloon. At this point, we were pretty good at following the crowd so we were able to manage and still have a good time.

Here are a few photos from Lotte World: 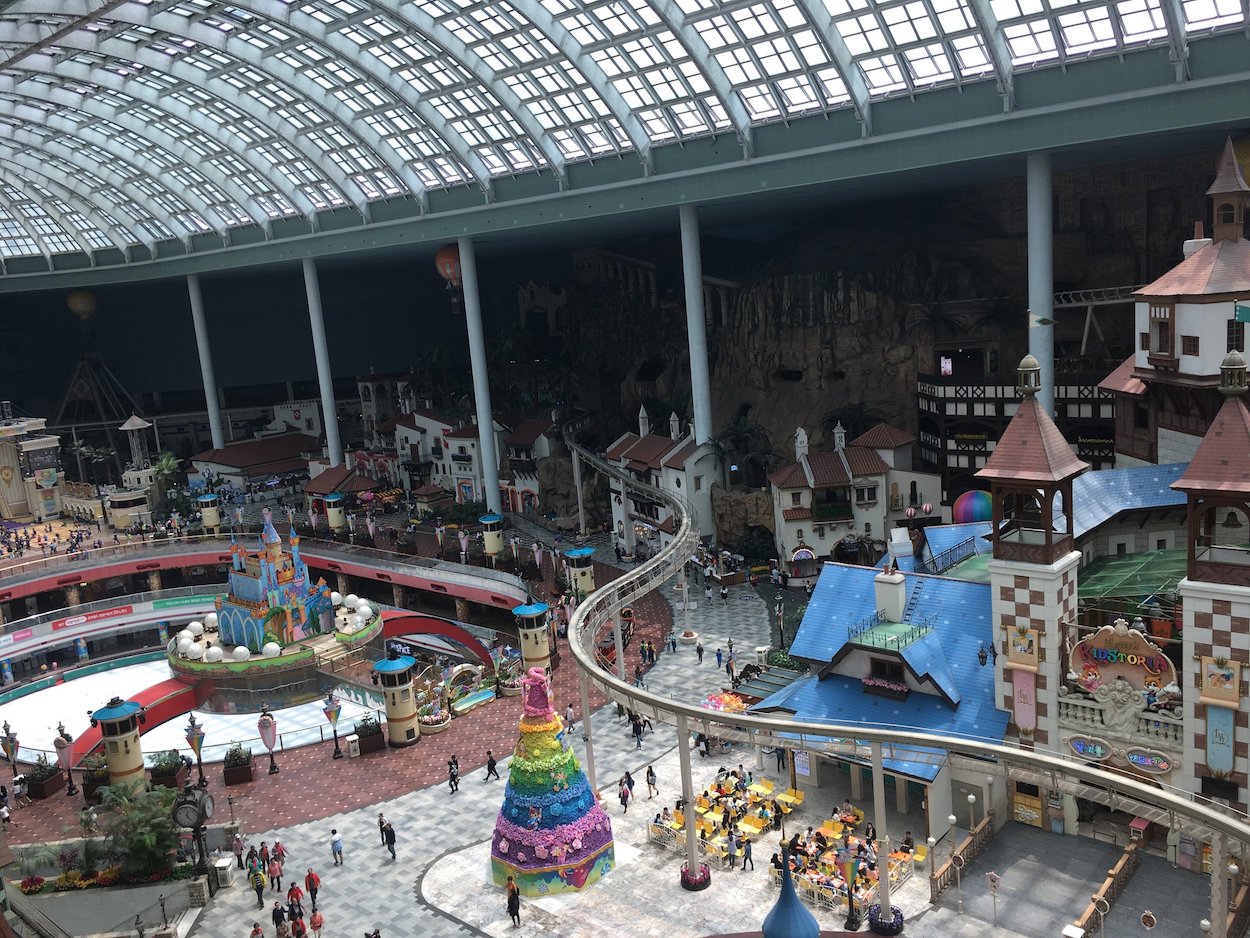 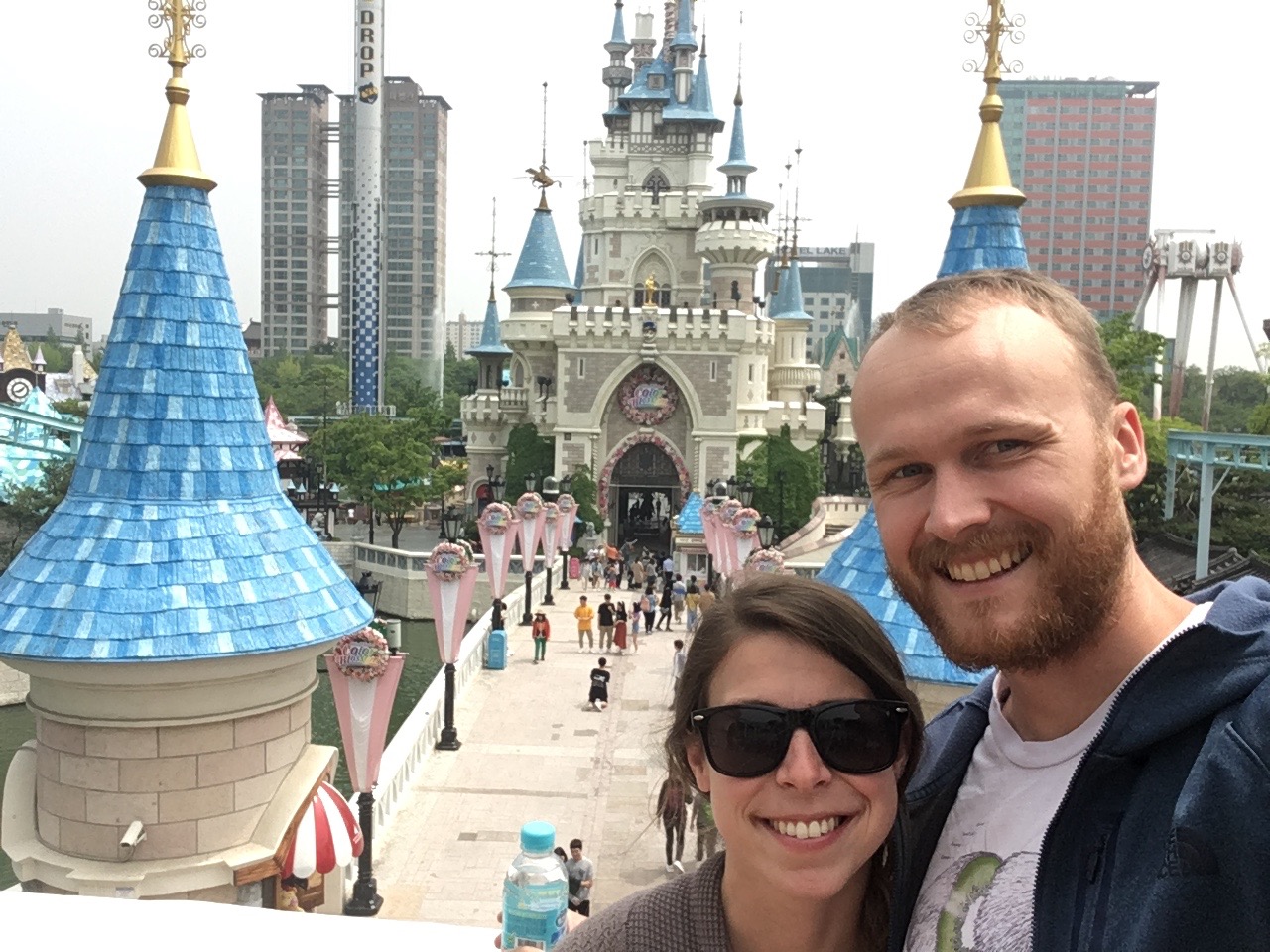 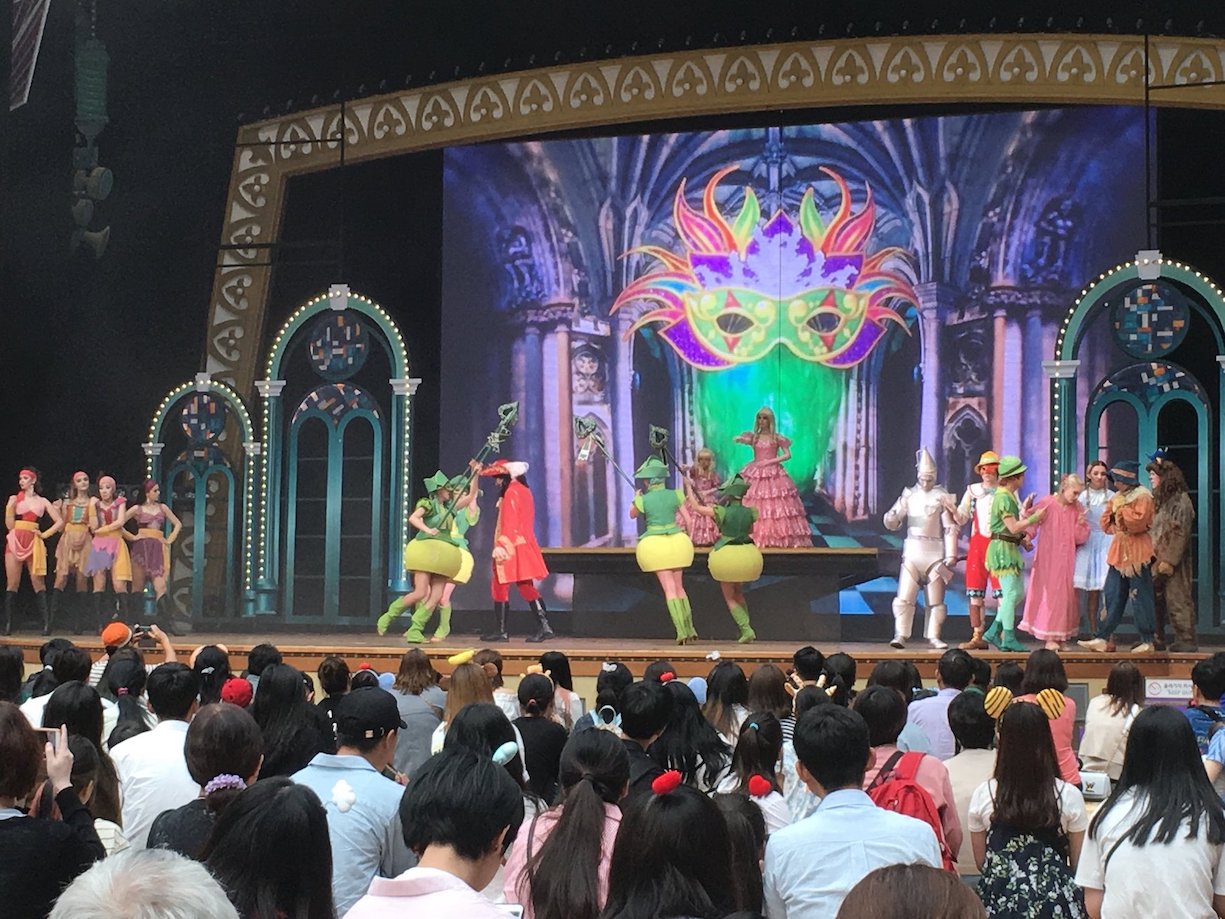 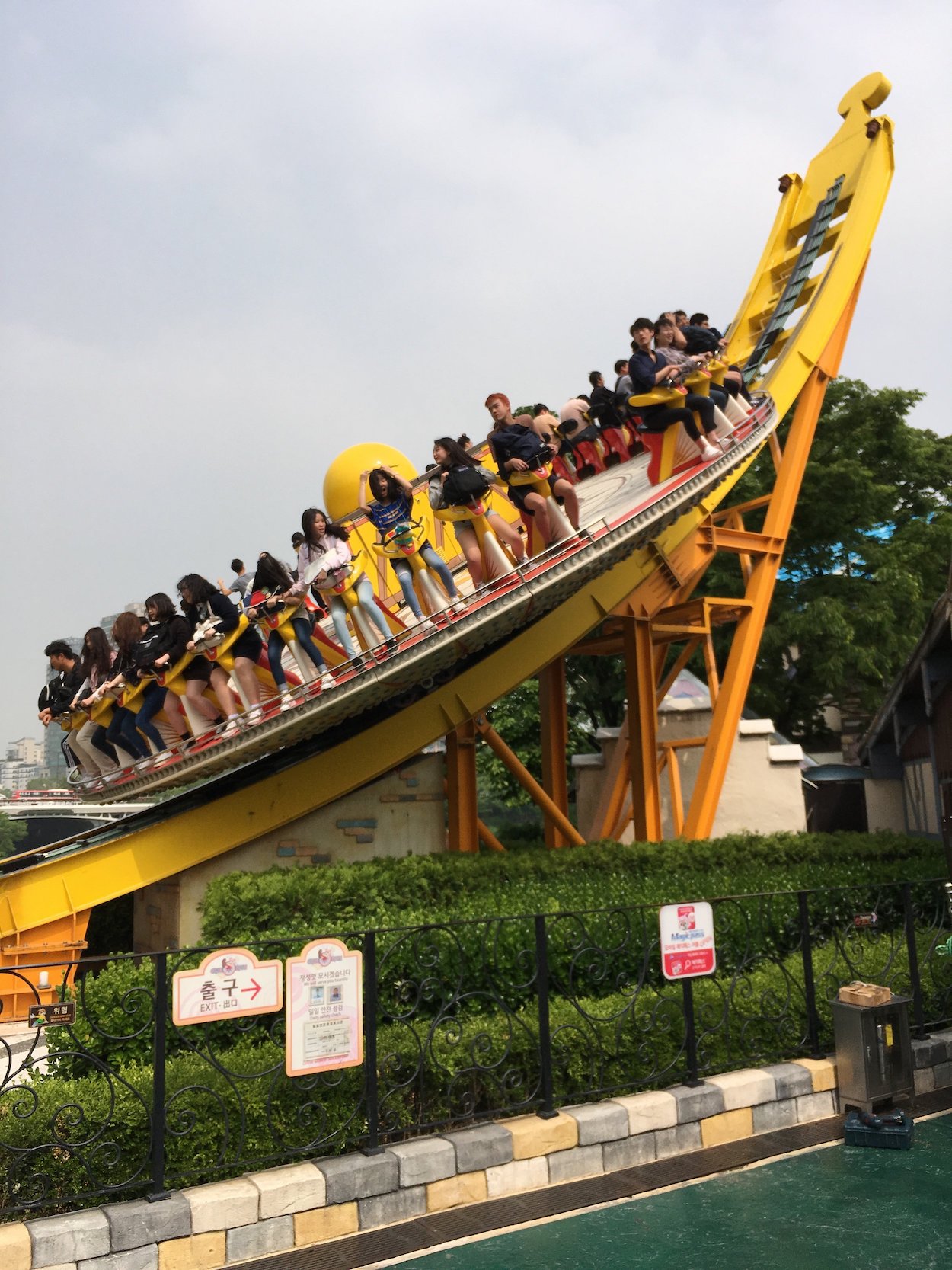 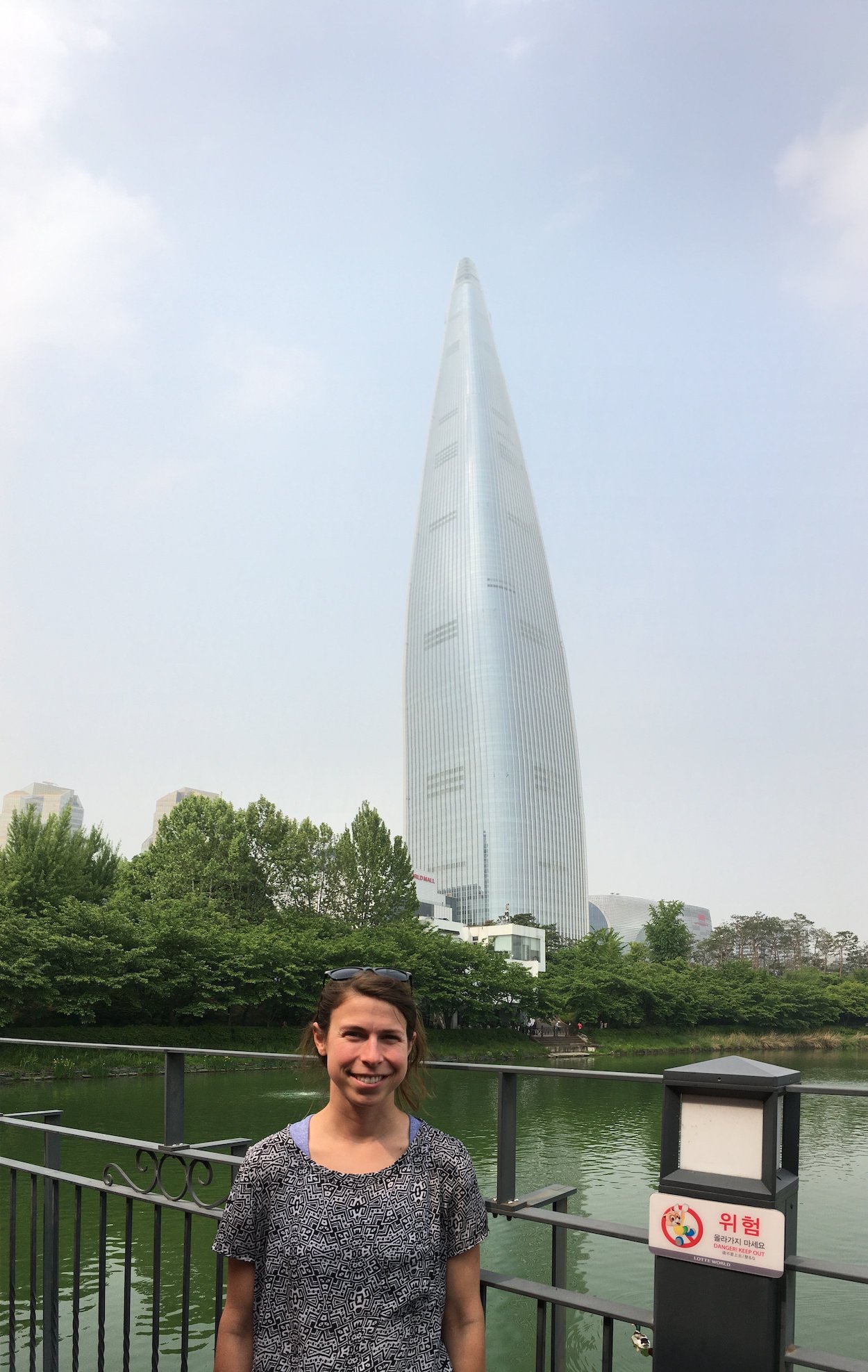 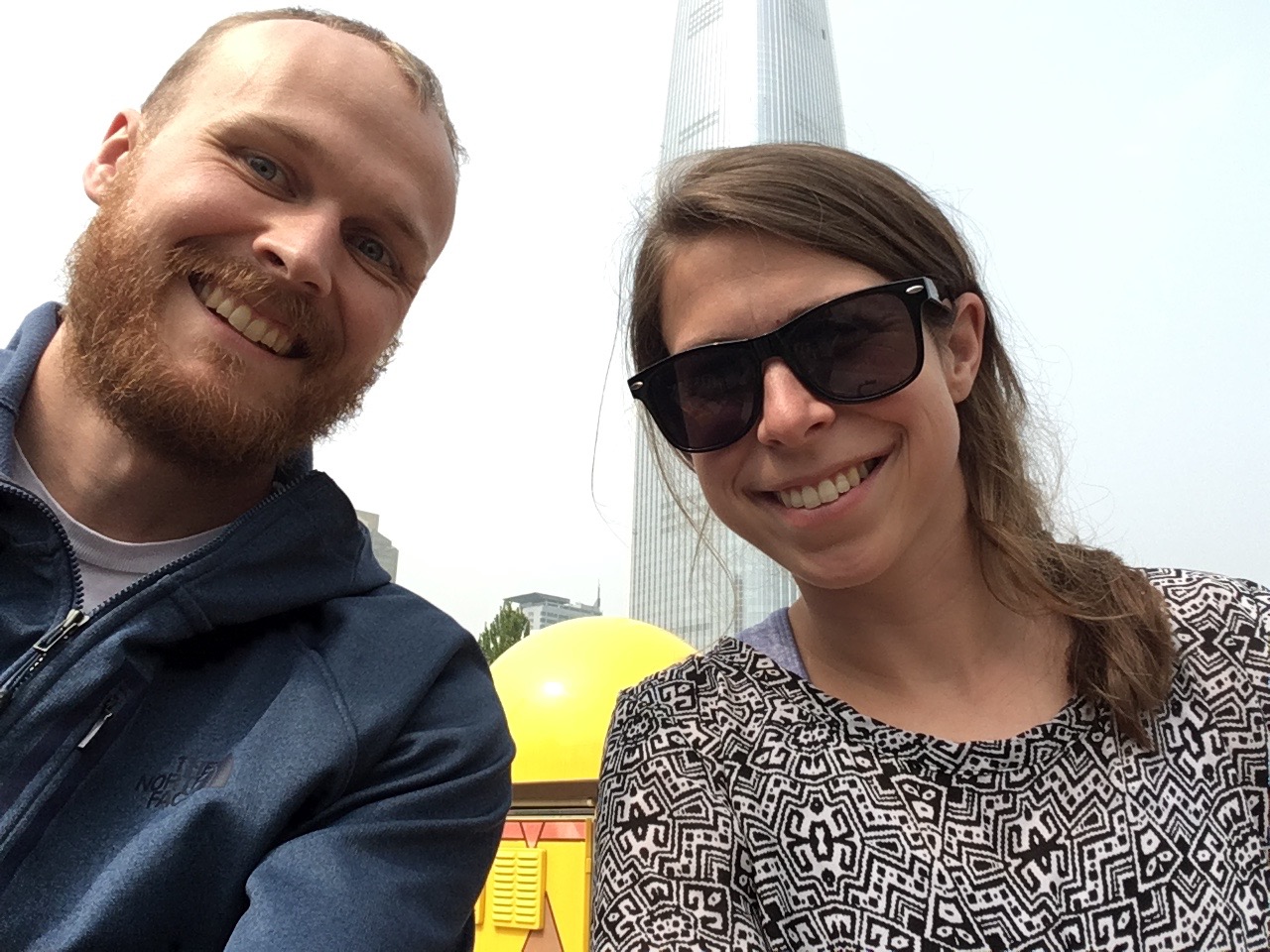 One aside - for a weekday during the school year, there were a whole lot of teenagers roaming around Lotte World. Something we started to notice were how many of the couples (and in some cases, groups of friends) were wearing matching outfits (not always teenagers, but mostly younger people) - to the point where we started to note them when spotted. The best part was the male/female variations on outfits; they weren’t identical and it was clear that some thought had gone into how to make a male and a female version. Unfortunately, I only was able to capture a few examples: 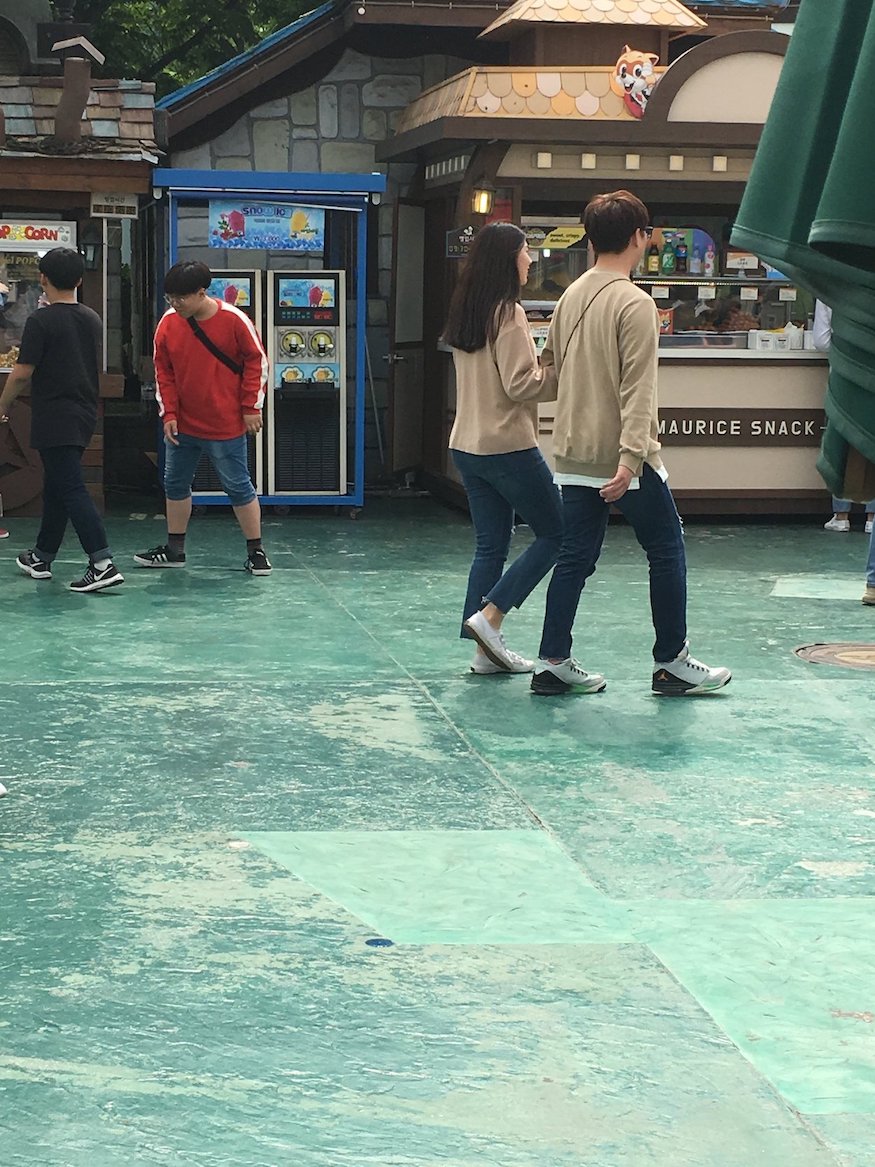 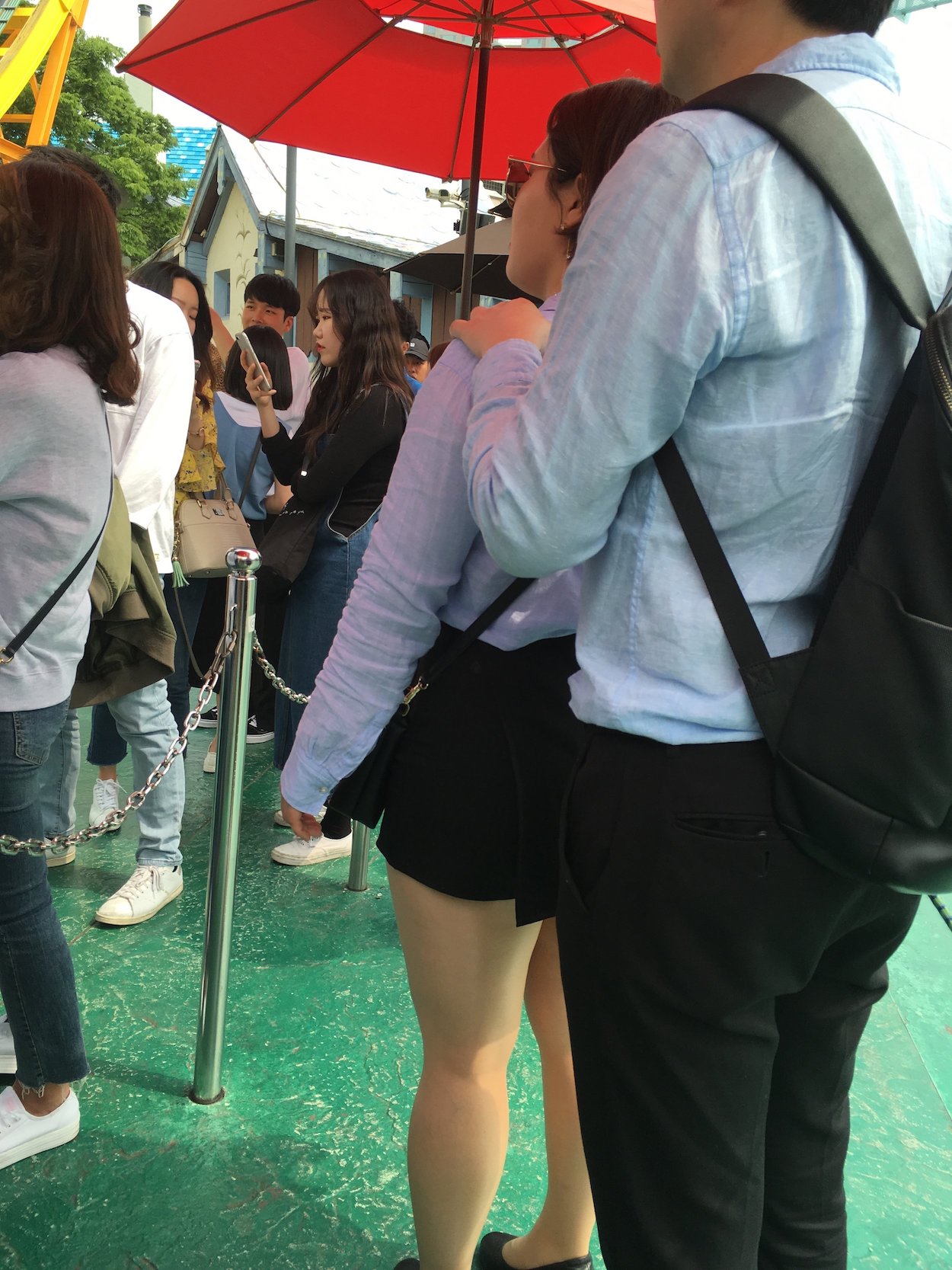 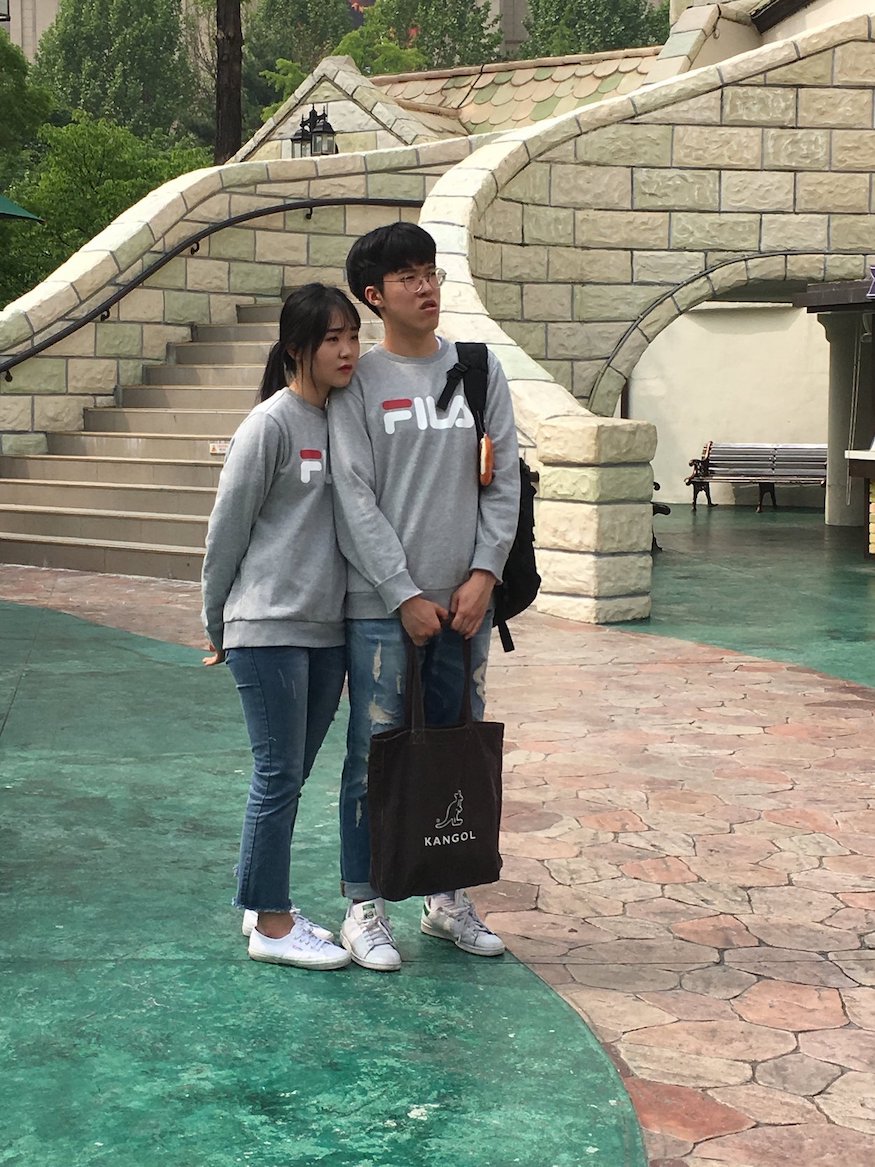 Themed cafes are a big thing in Seoul. After perusing some descriptions, we decided the best one to visit would be the ‘Raccoon Cafe’. Immediately upon walking in, we were greeted by some friendly hosts - a Corgi and two pigs! Once their human came out to greet us, we were able to order drinks and then hang out in the cafe with the animals for a while. There was a separate charge to enter the actual raccoon area, but after looking at them through the glass, I opted out (look at the picture below and you’ll understand why). But I did love hanging out with the mini pig! 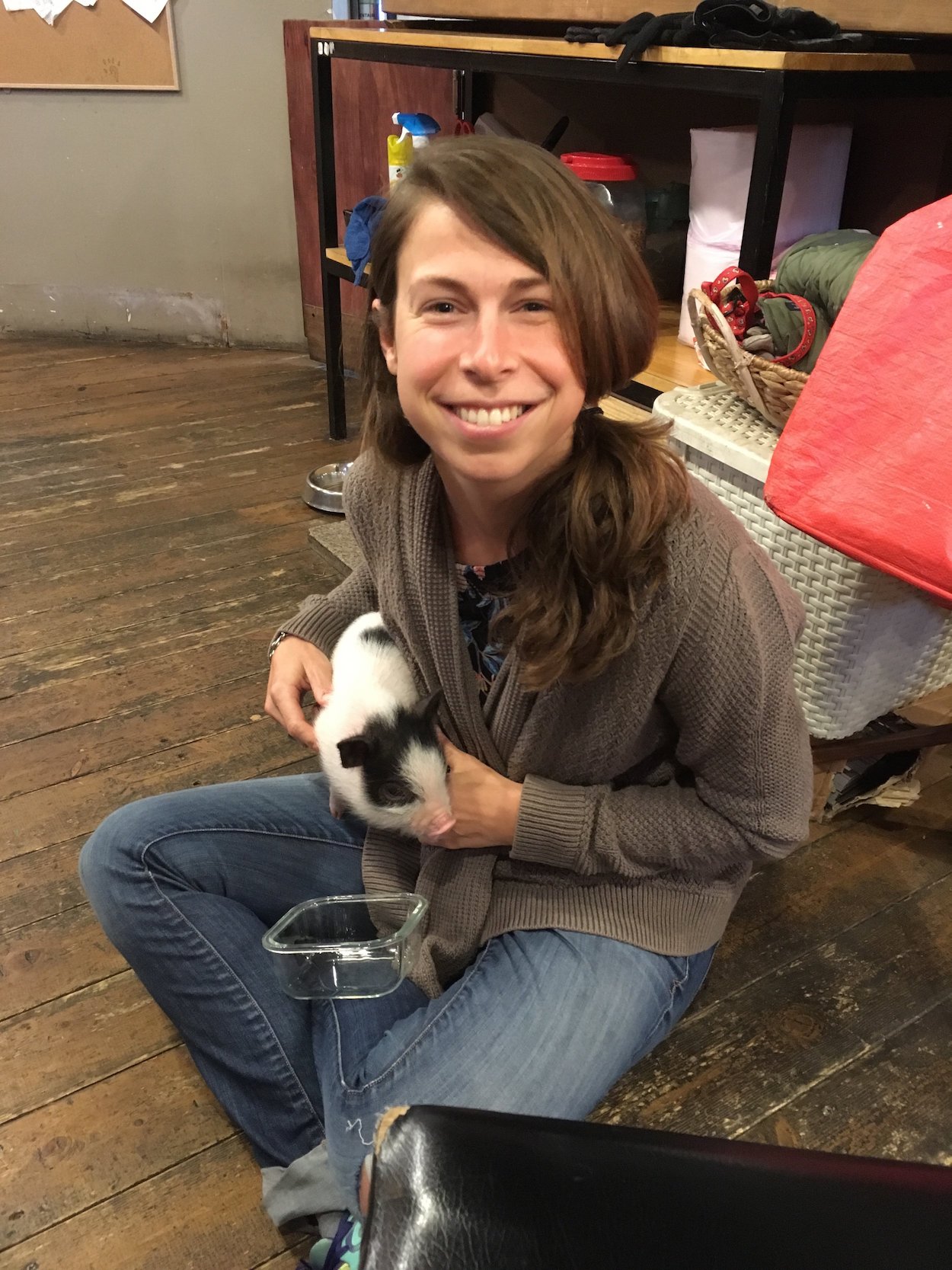 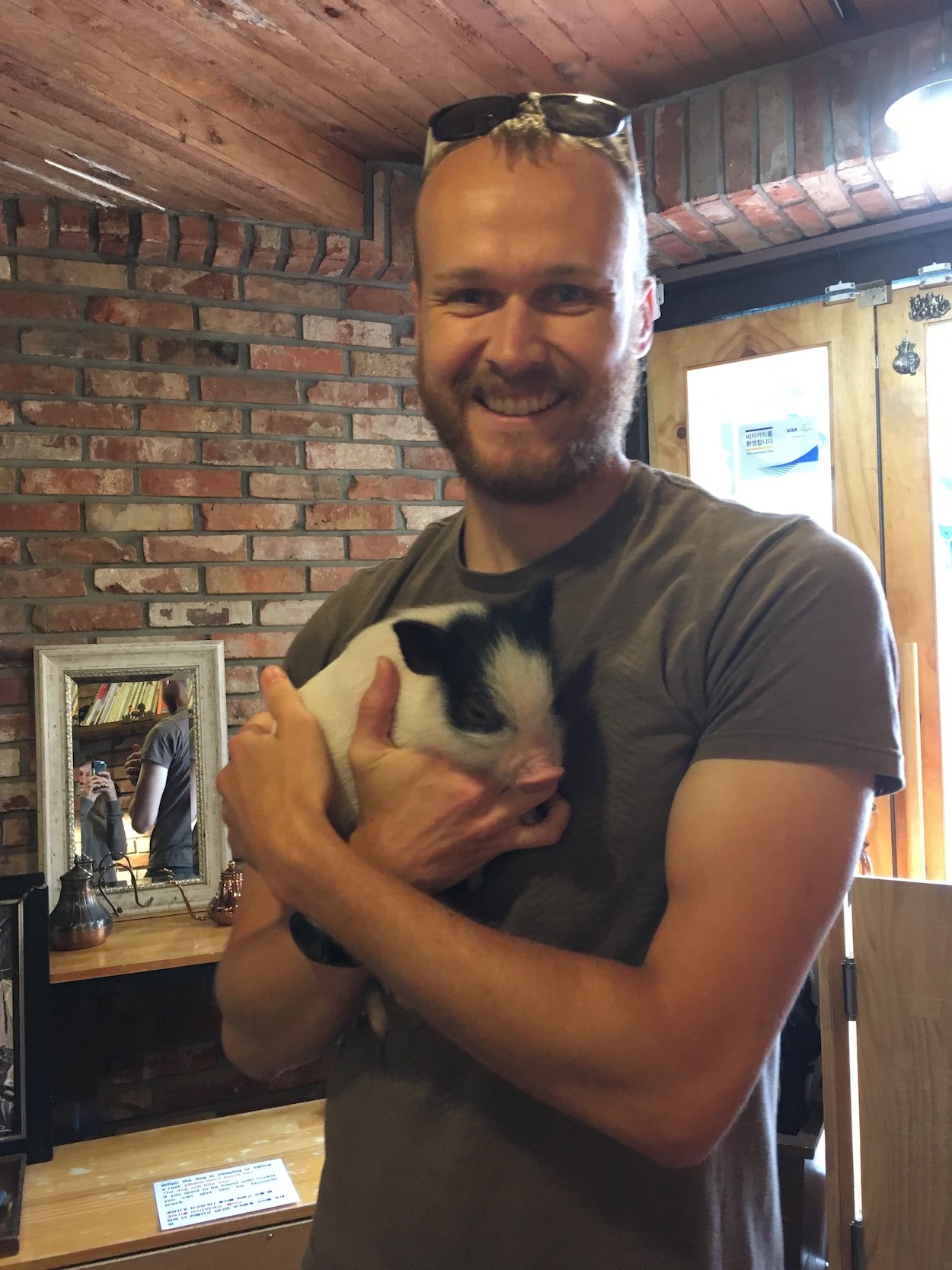 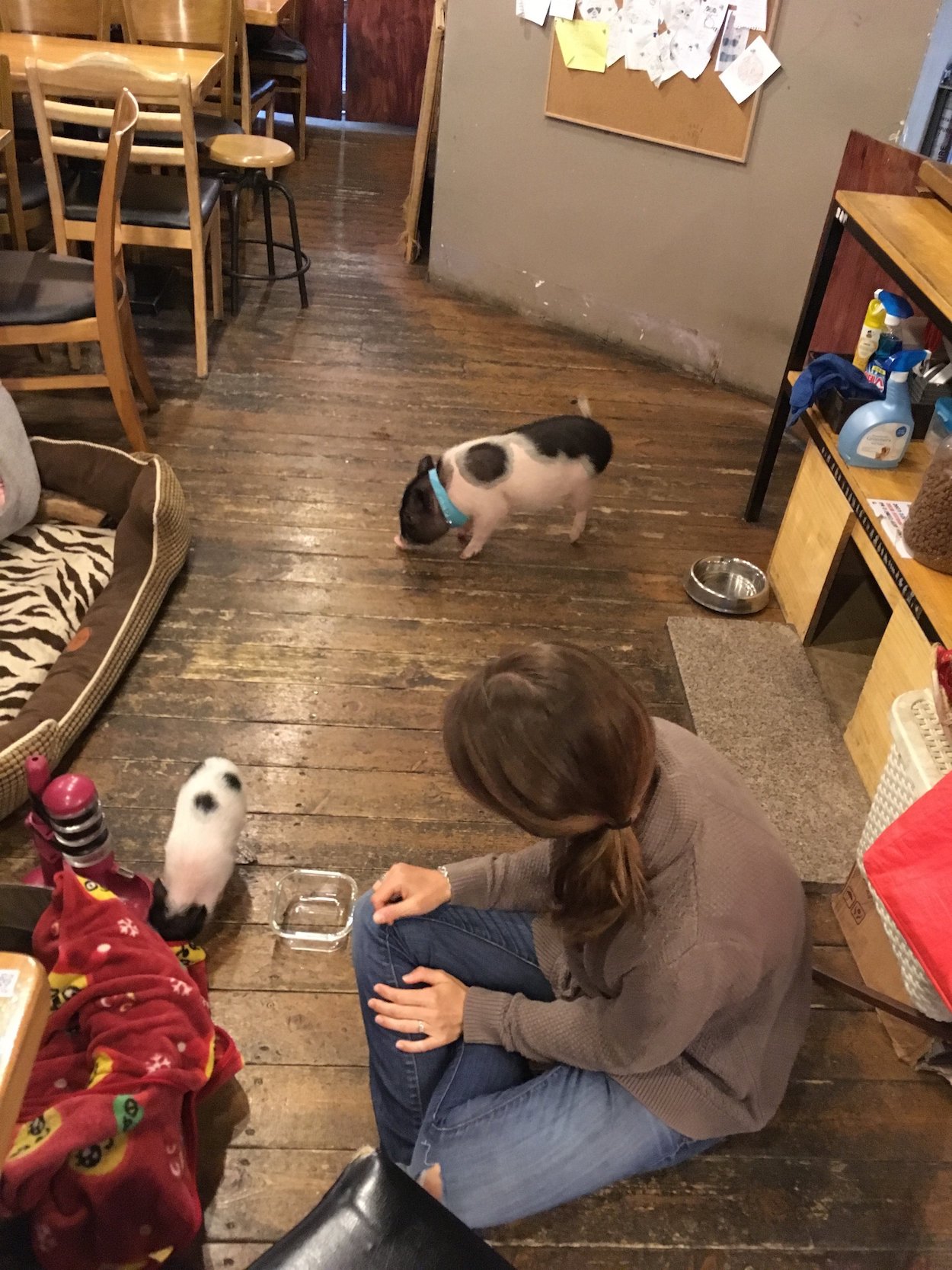 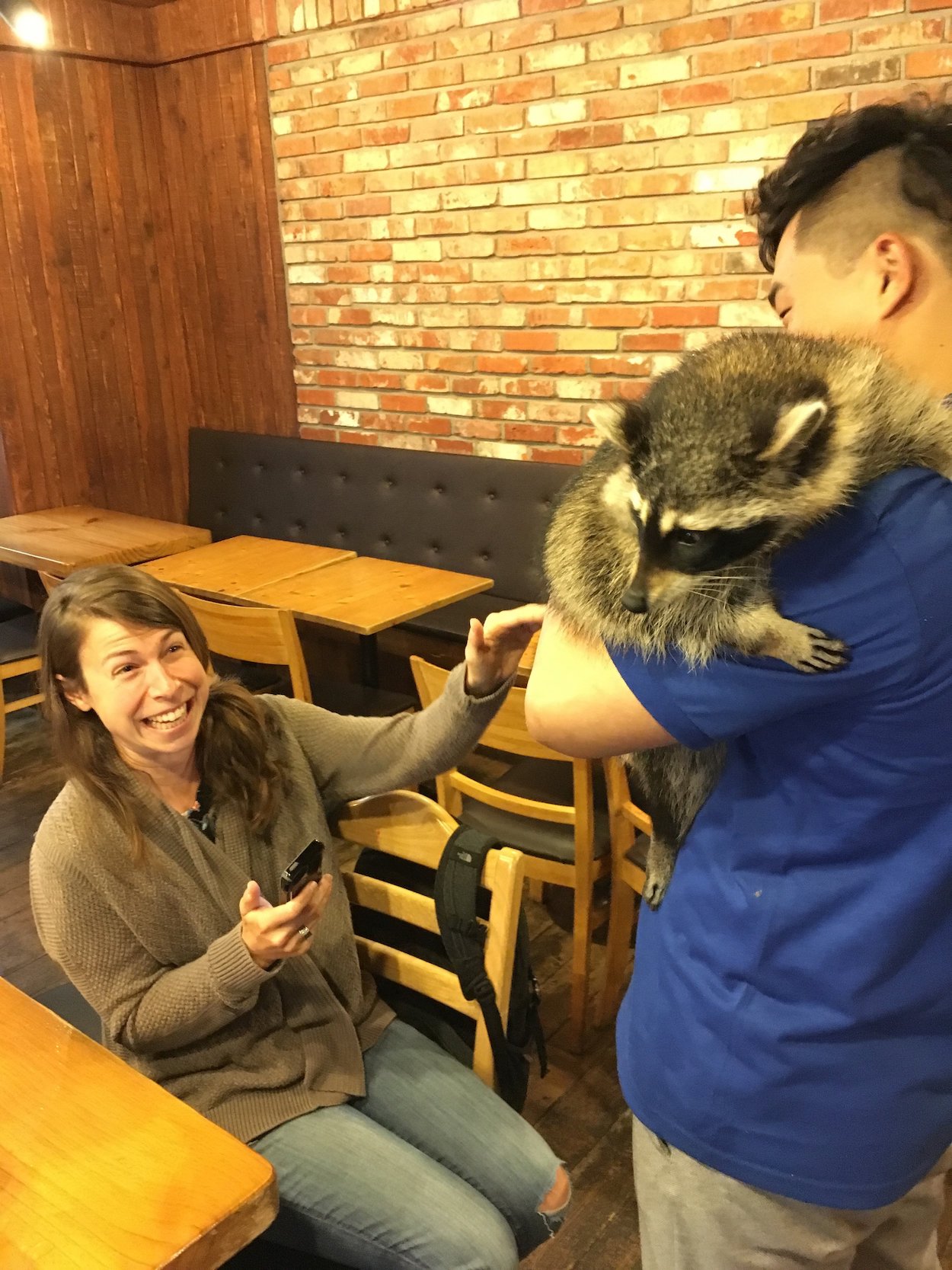 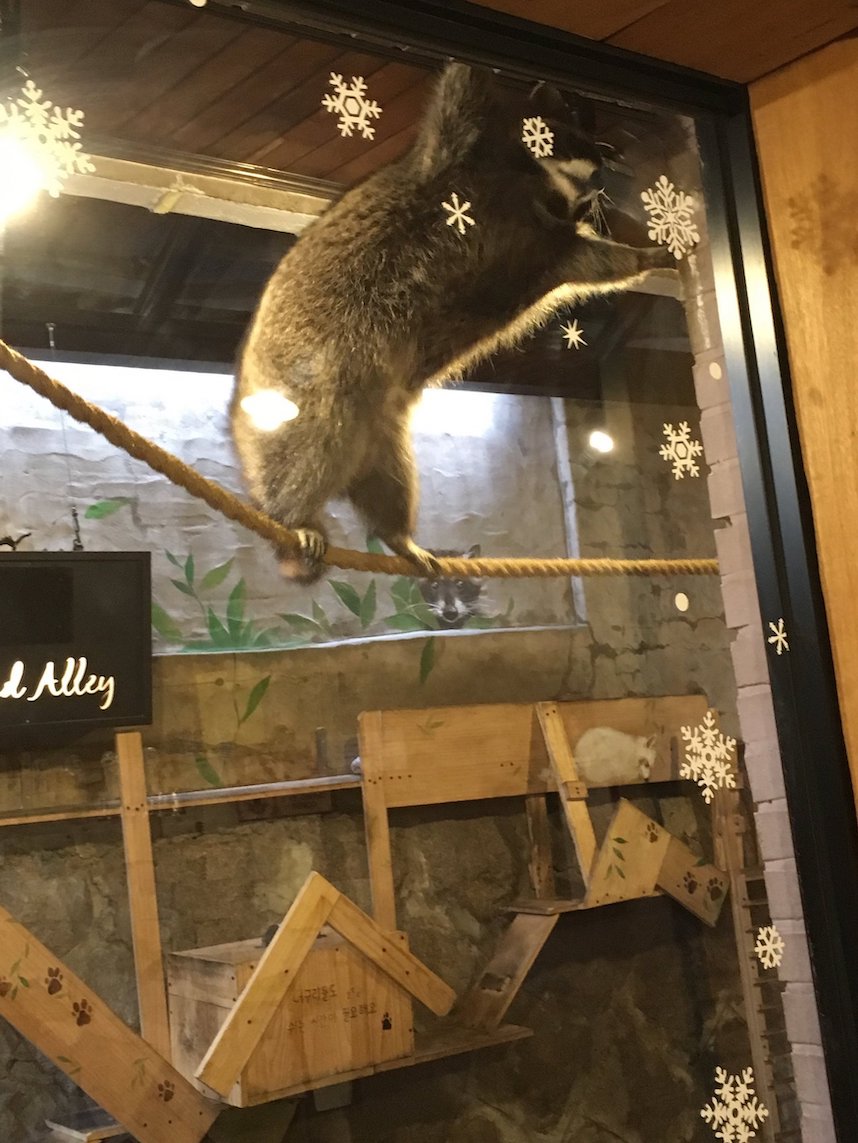 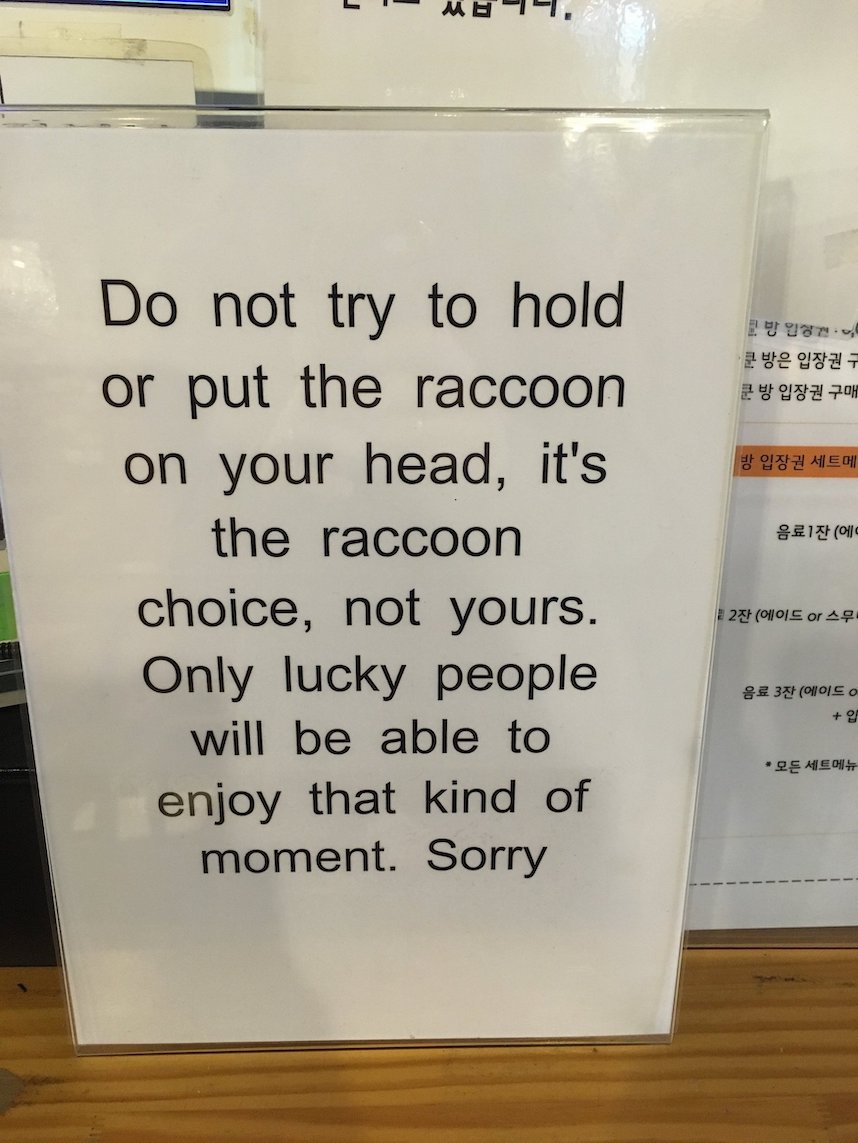 One day we decided to find out what professional sports in Asia are like. Korea has a 10 team professional baseball league with stadiums throughout the country, including one in Seoul. Occasionally a player from the Korean league will transfer into America’s MLB (and slightly more often, players from the MLB come to Korea for more playing time). The biggest difference between the leagues though - at least from an outside perspective - is the excitement at the games. Don’t get me wrong, I’ve been to many a Redsox/Yankees game and witnessed the intensity of fans and the rowdiness of a World Series win in Boston. But game to game and inning to inning, I’m pretty sure the Korean fans have Americans beat. There was CONSTANT cheering (not just yelling - like coordinated singing and chanting) by EVERYONE. There were even cheerleaders and the home team had drums to sound off when something exciting happened. We were way out in the bleachers, but the huge stadium was packed, and everyone was into it, all game long! (Also they weirdly served beers with straws as if they were Slurpees from 7-11). 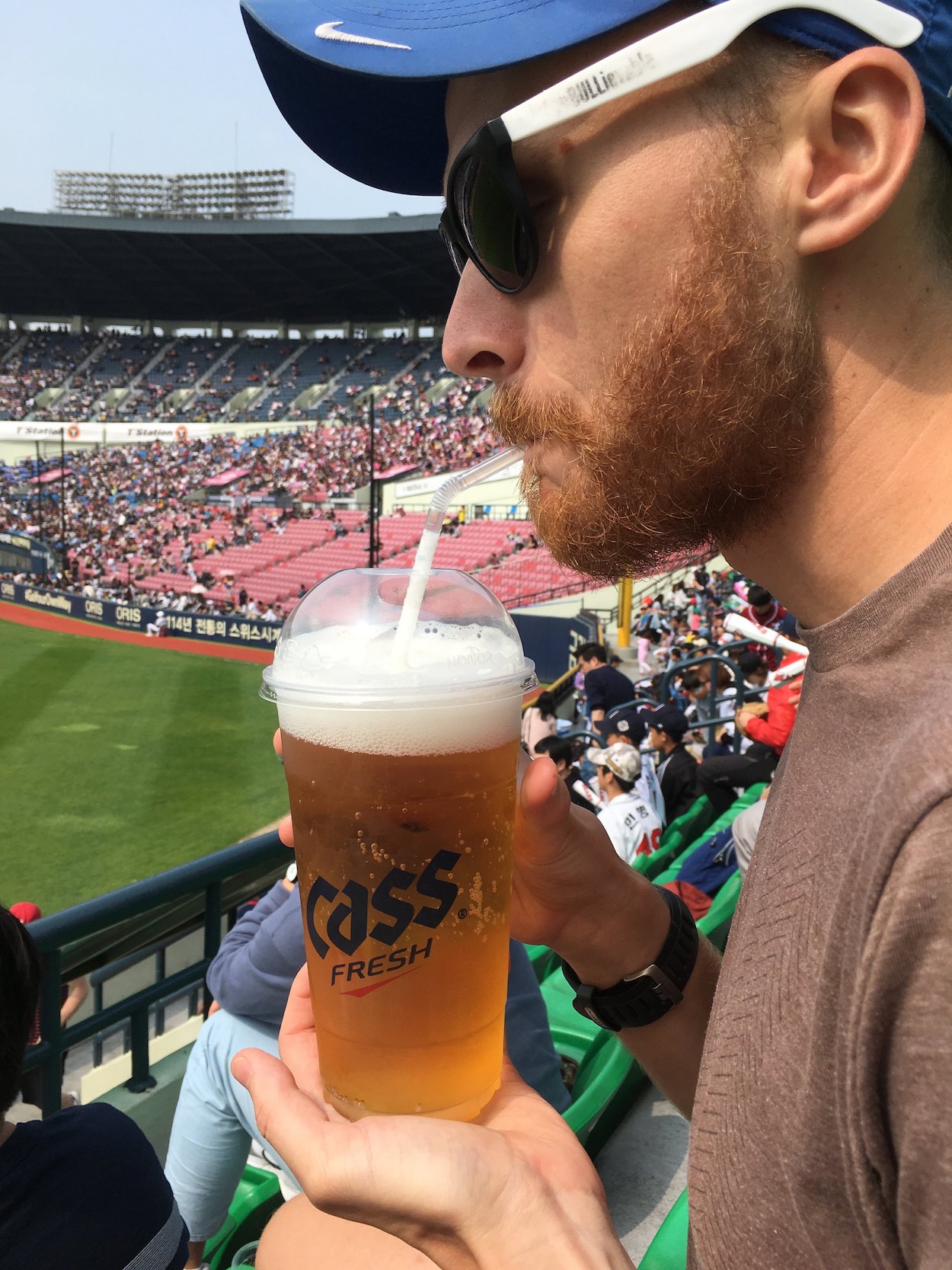 We did some serious eating in Korea. From traditional Korean meals with tons of side dishes and rice to huge platters of chicken with Hite “Extra Cold” beer, we tried them all. Here is a brief food recap: 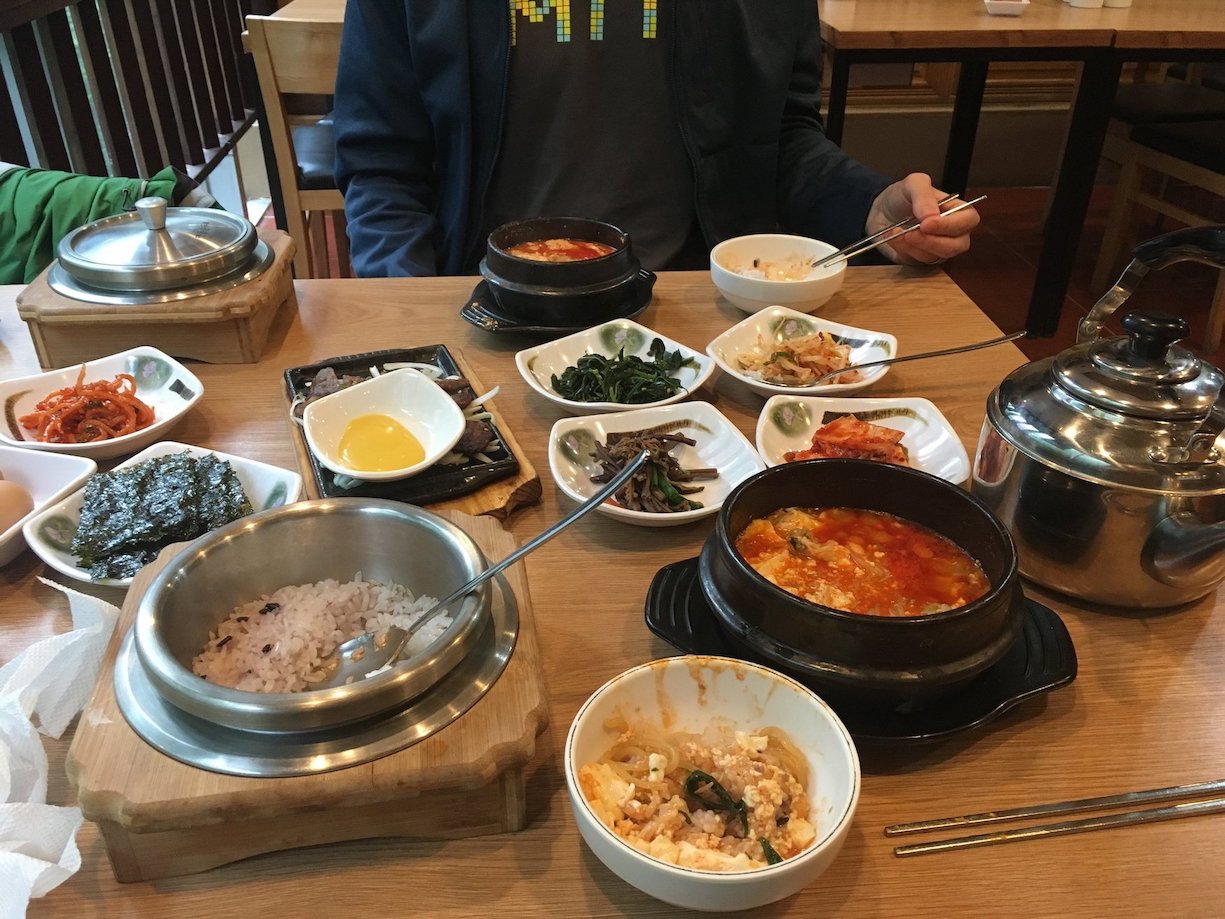 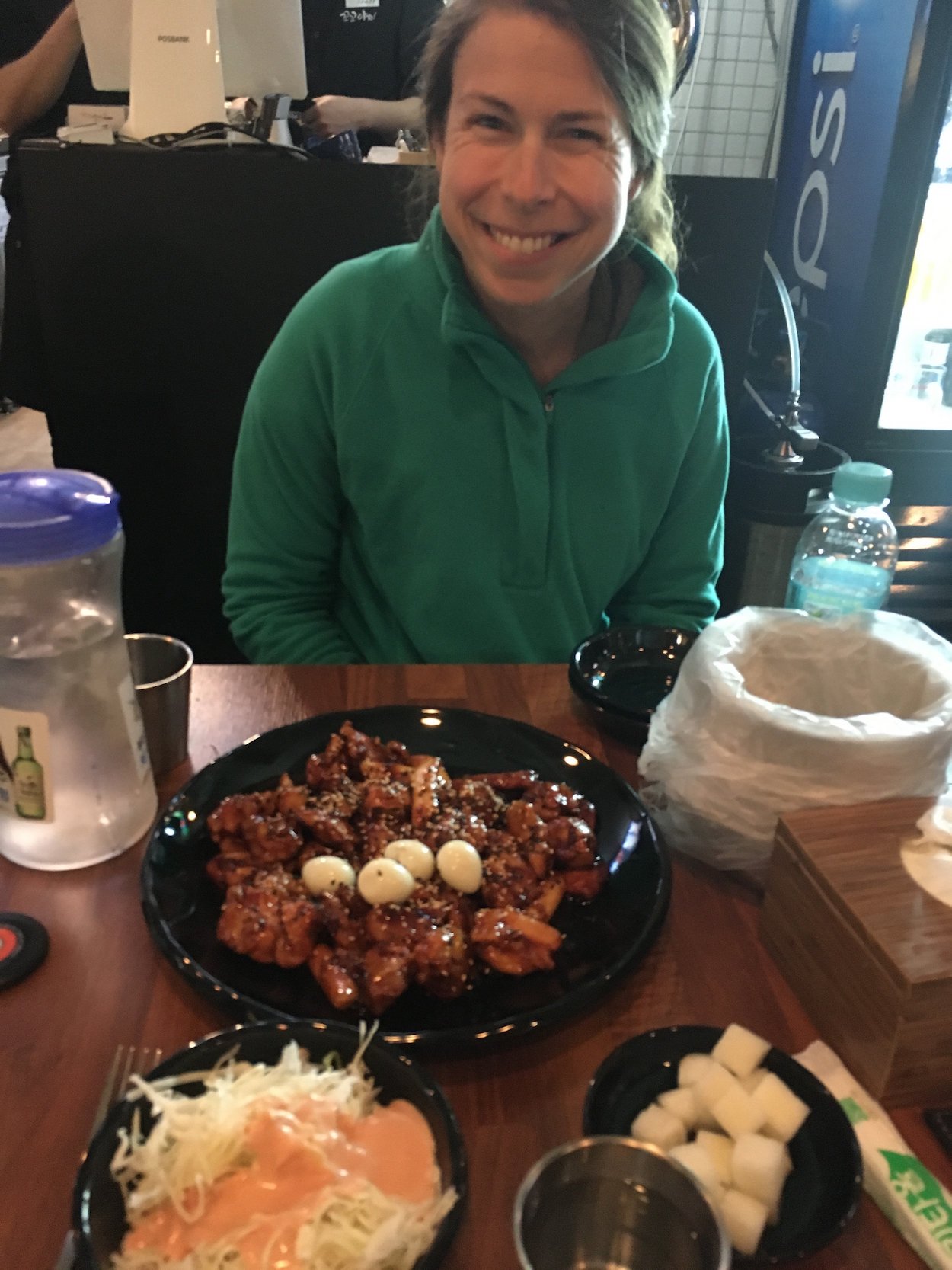 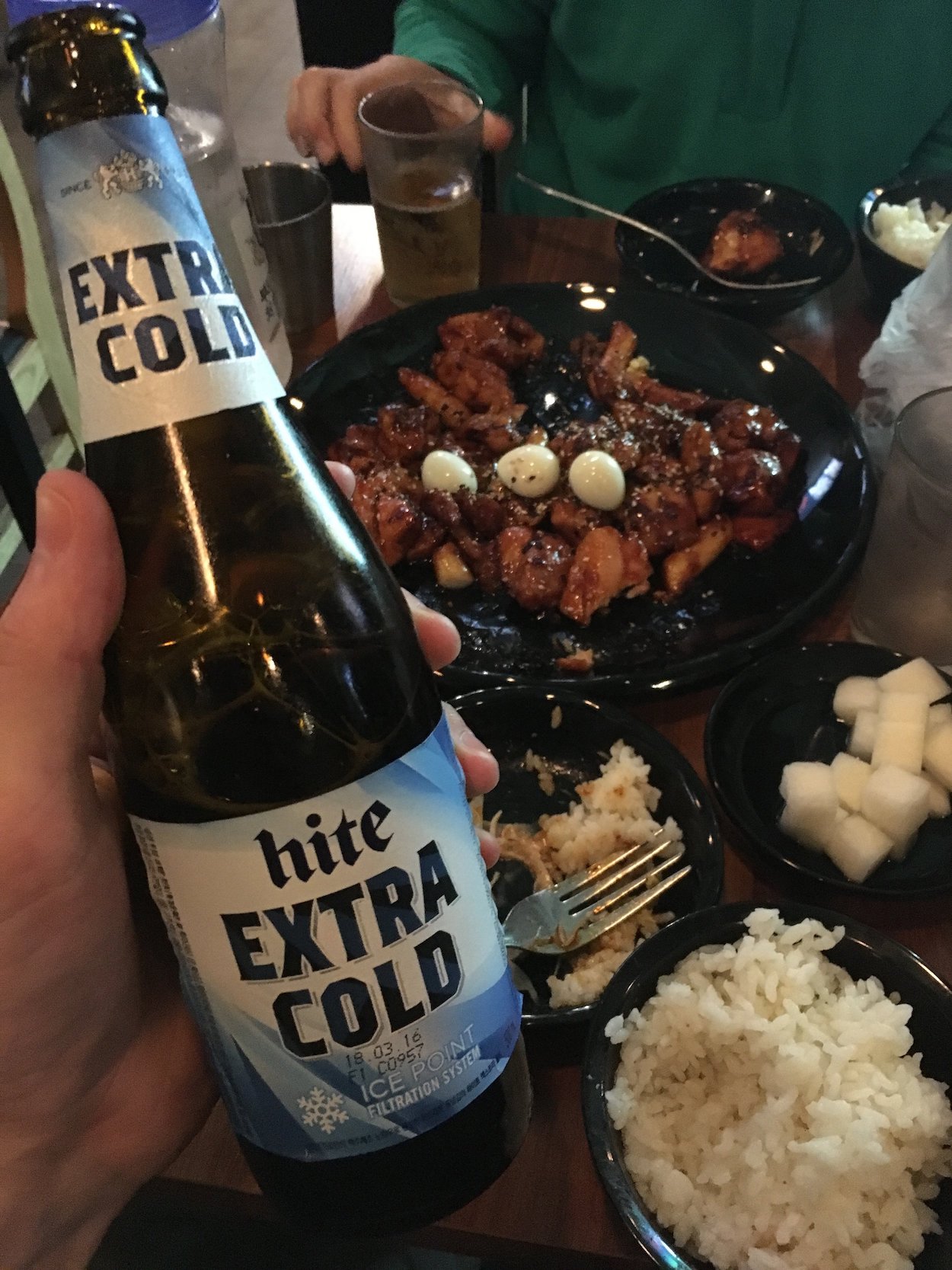 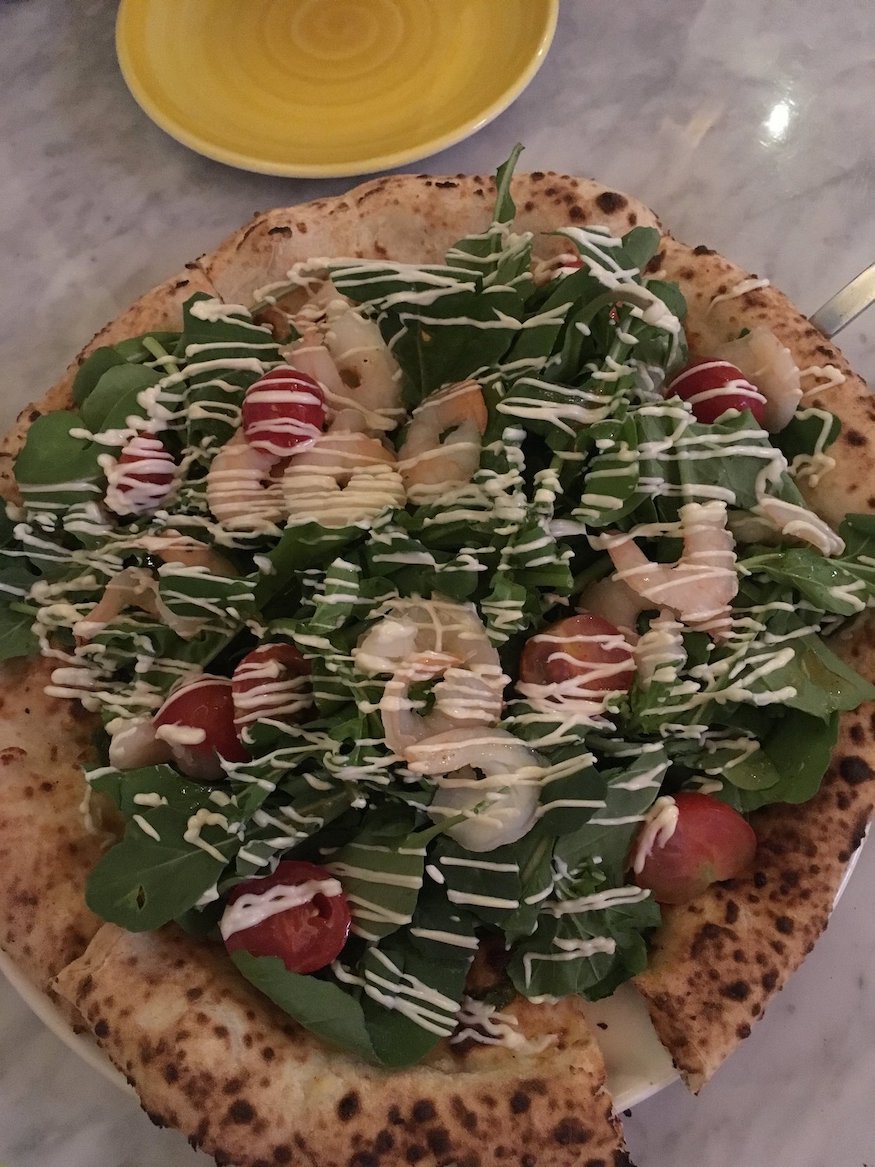 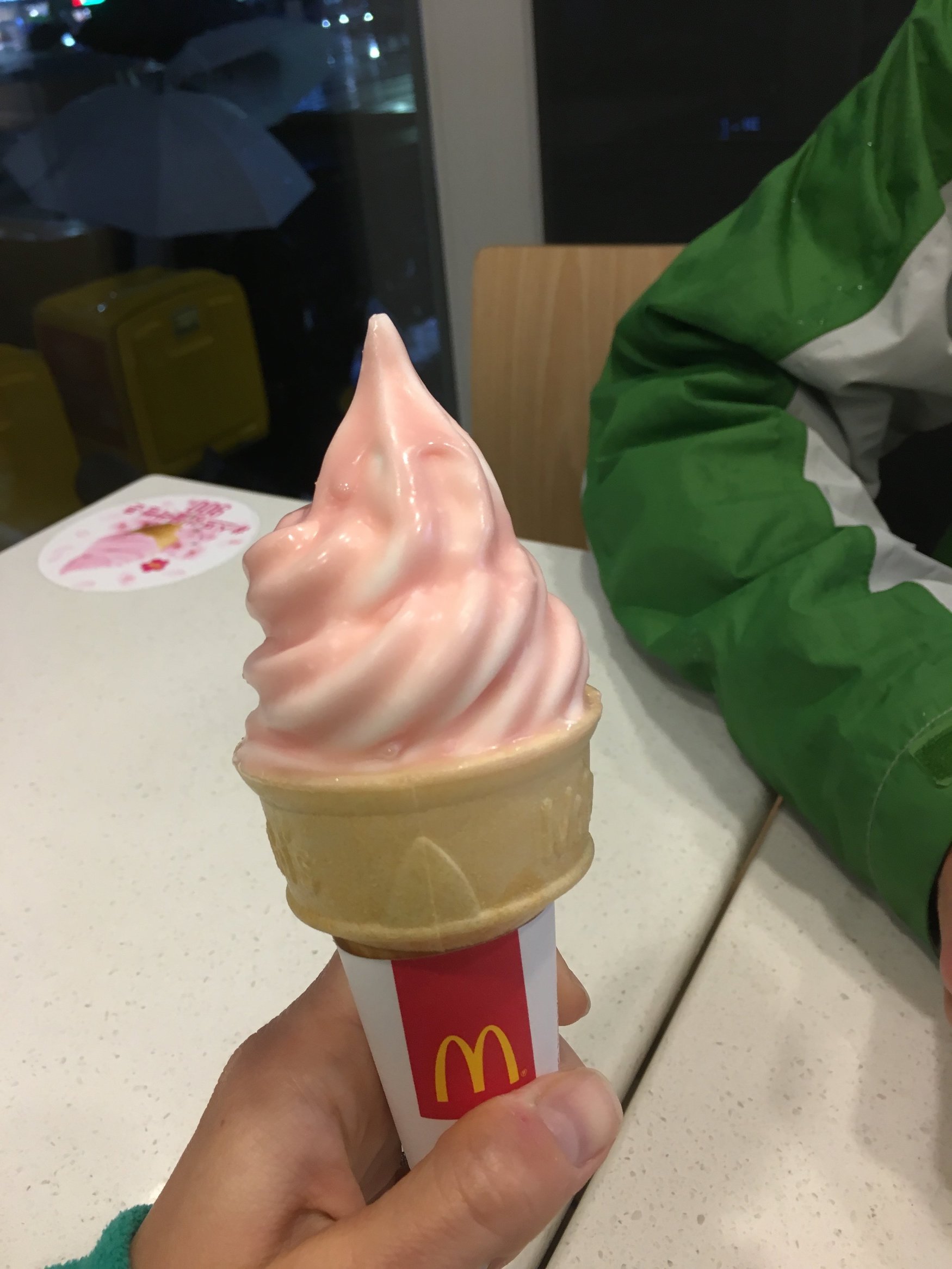 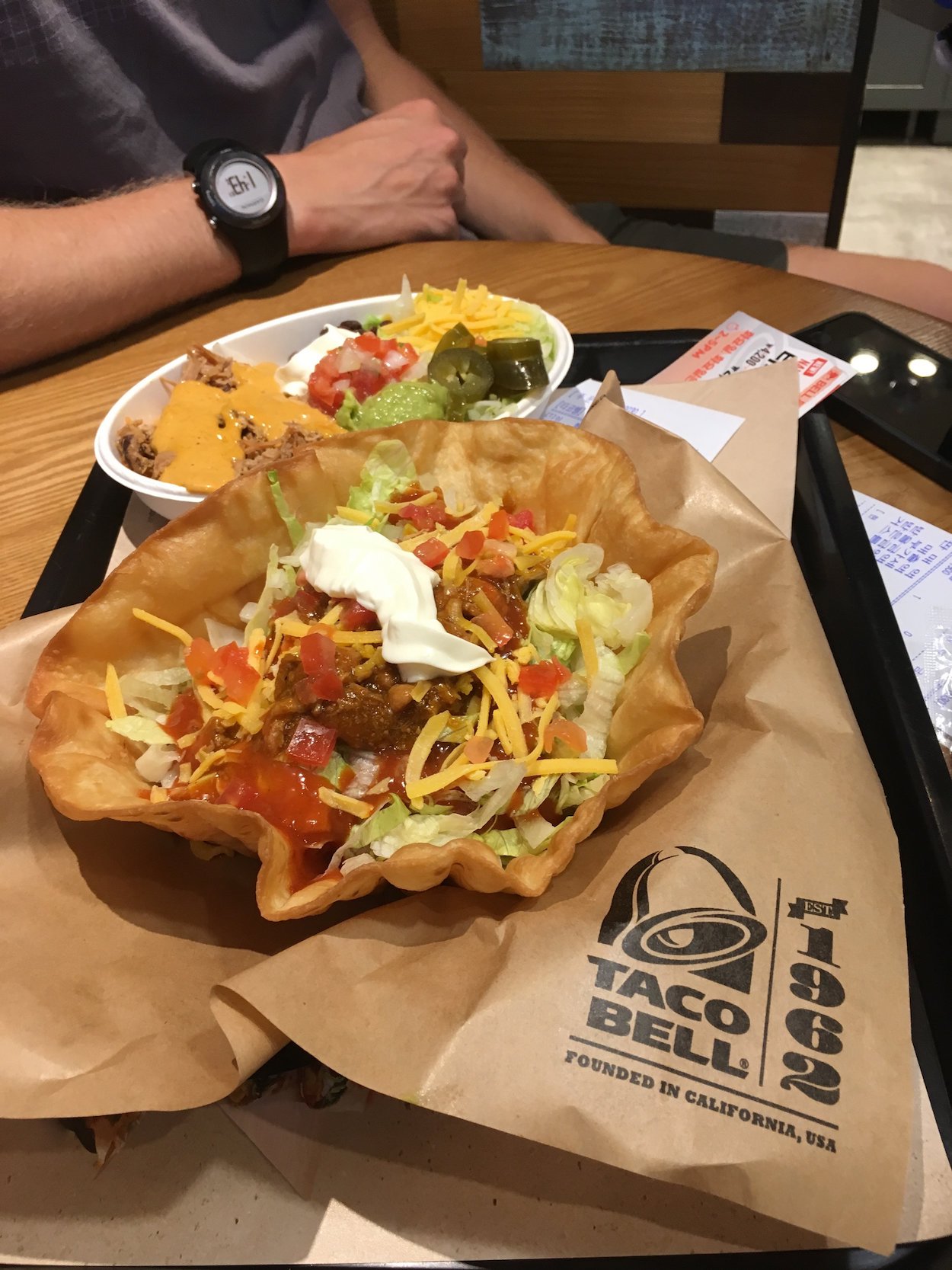