Sapa is an area northwest of Hanoi known for its terraced rice paddies, tribal villages, and awesome hiking. The most popular activity is trekking (hiking) with local guides through the mountains and terraces from village to village. Our adventure in Sapa was unlike any other part of our trip so far. Sapa gave us an opportunity to explore the beautiful landscapes, while also testing my ability to adapt in surroundings that were a bit out of my comfort zone (jury is still out as to whether I adapted successfully or not).

We wanted to have an authentic experience, so instead of staying in Sapa town (a more built-up touristy area with hotels, restaurants, etc.) we booked a homestay about 40 minutes away in one of the villages. I found the “Lazy Crazy Homestay” on airbnb - only $16/night, home cooked meals offered every day, and a host who can help you set up a trek with a local guide — what more could we need?!

Our homestay was a big open-air house. There weren’t any doors on the main house, and our room was attached on the side (it did have a door, though the doors and windows were wooden and weren’t sealed). Basically, we were glamping. 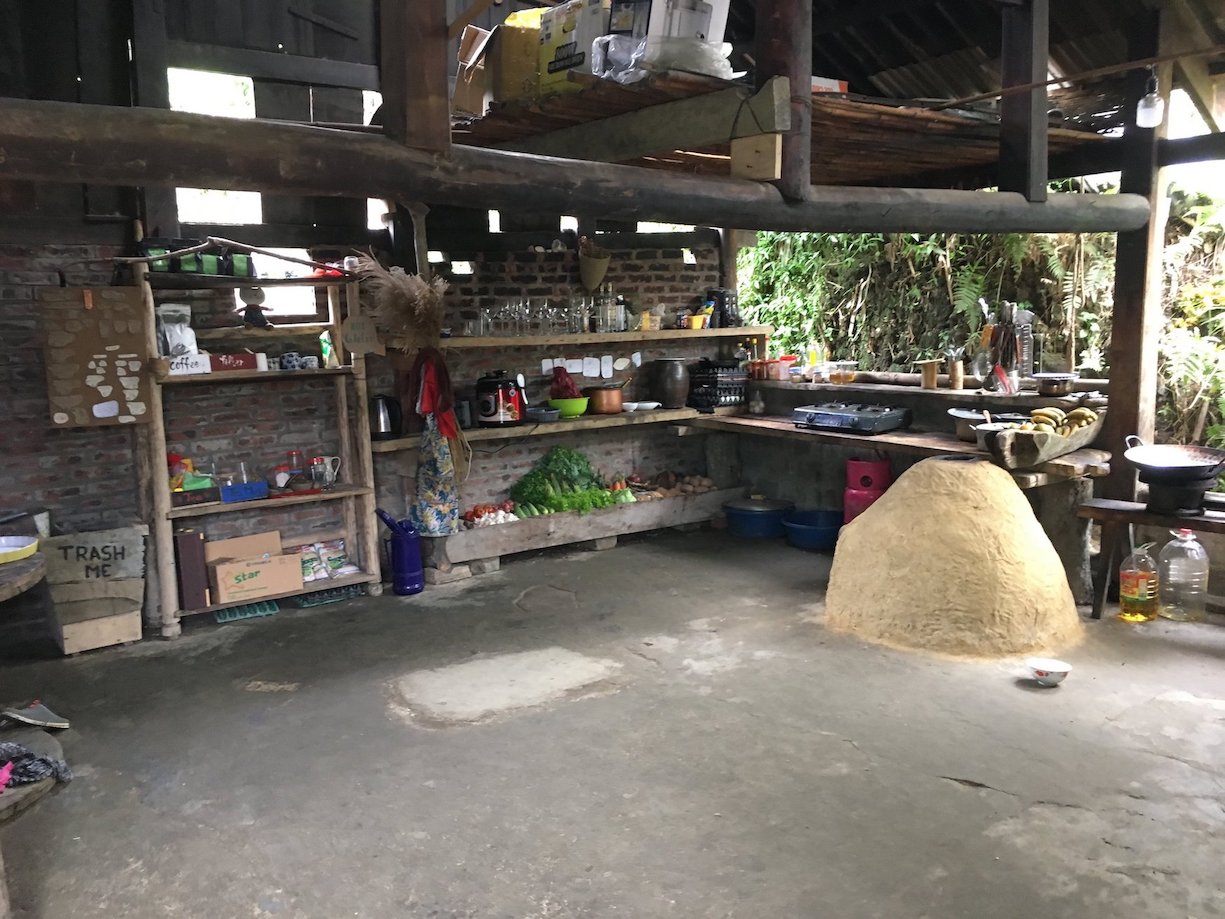 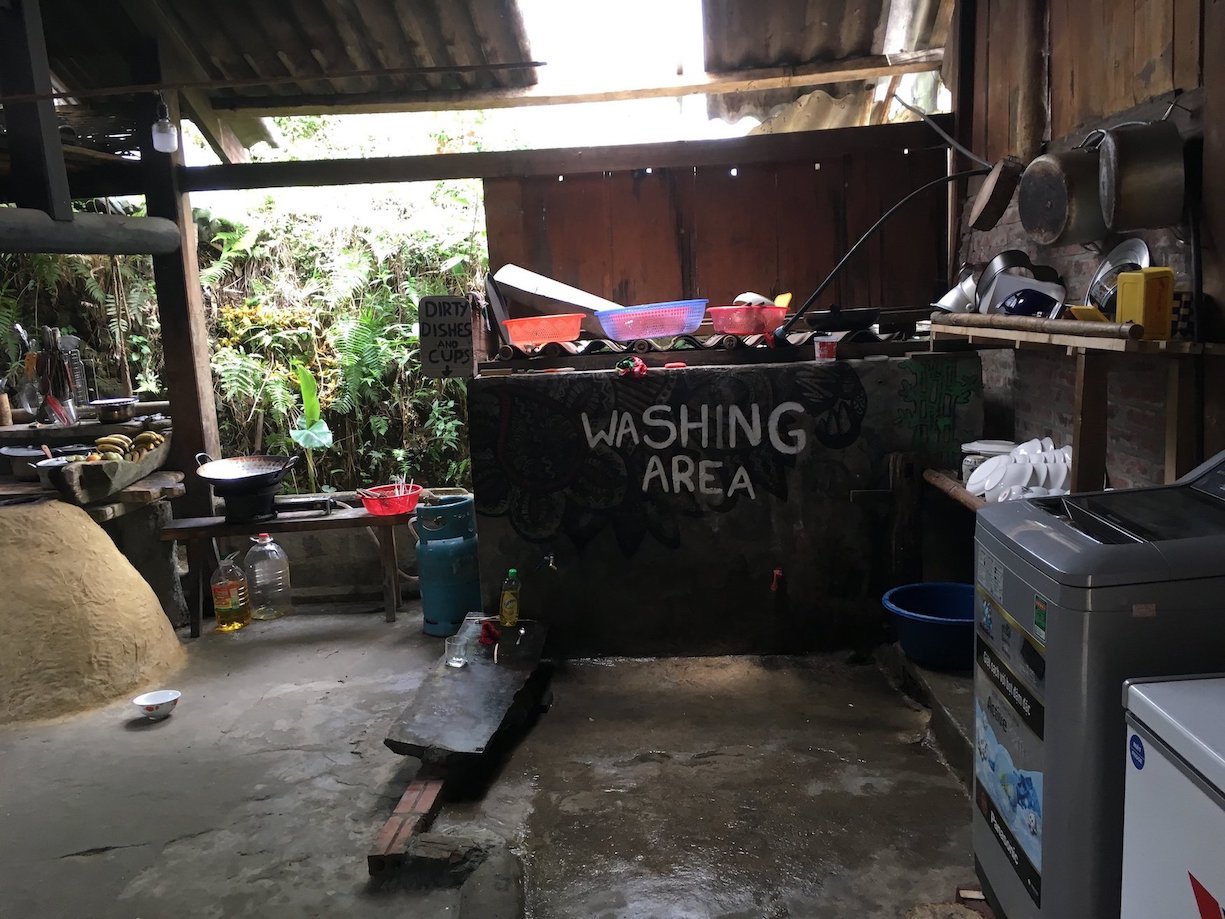 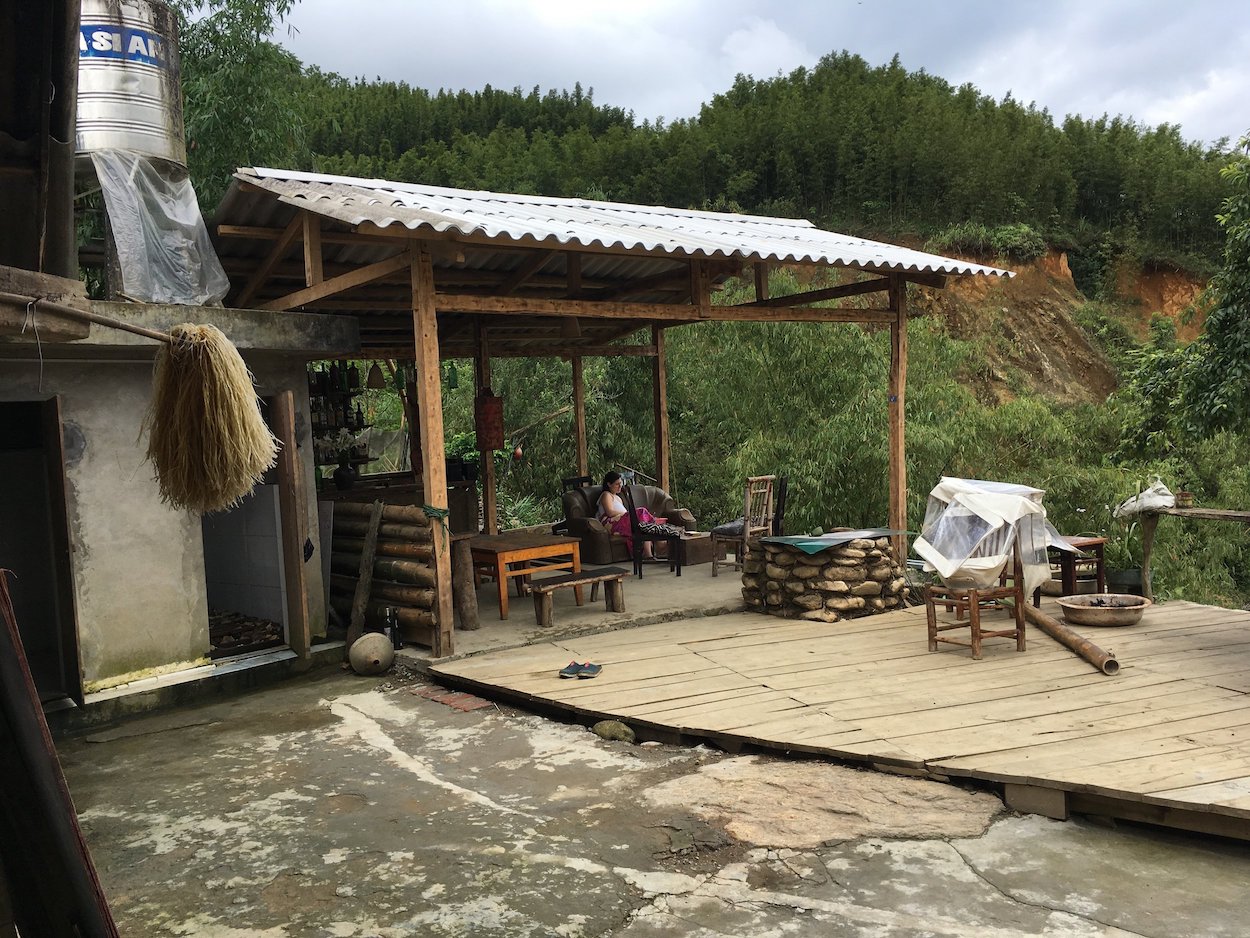 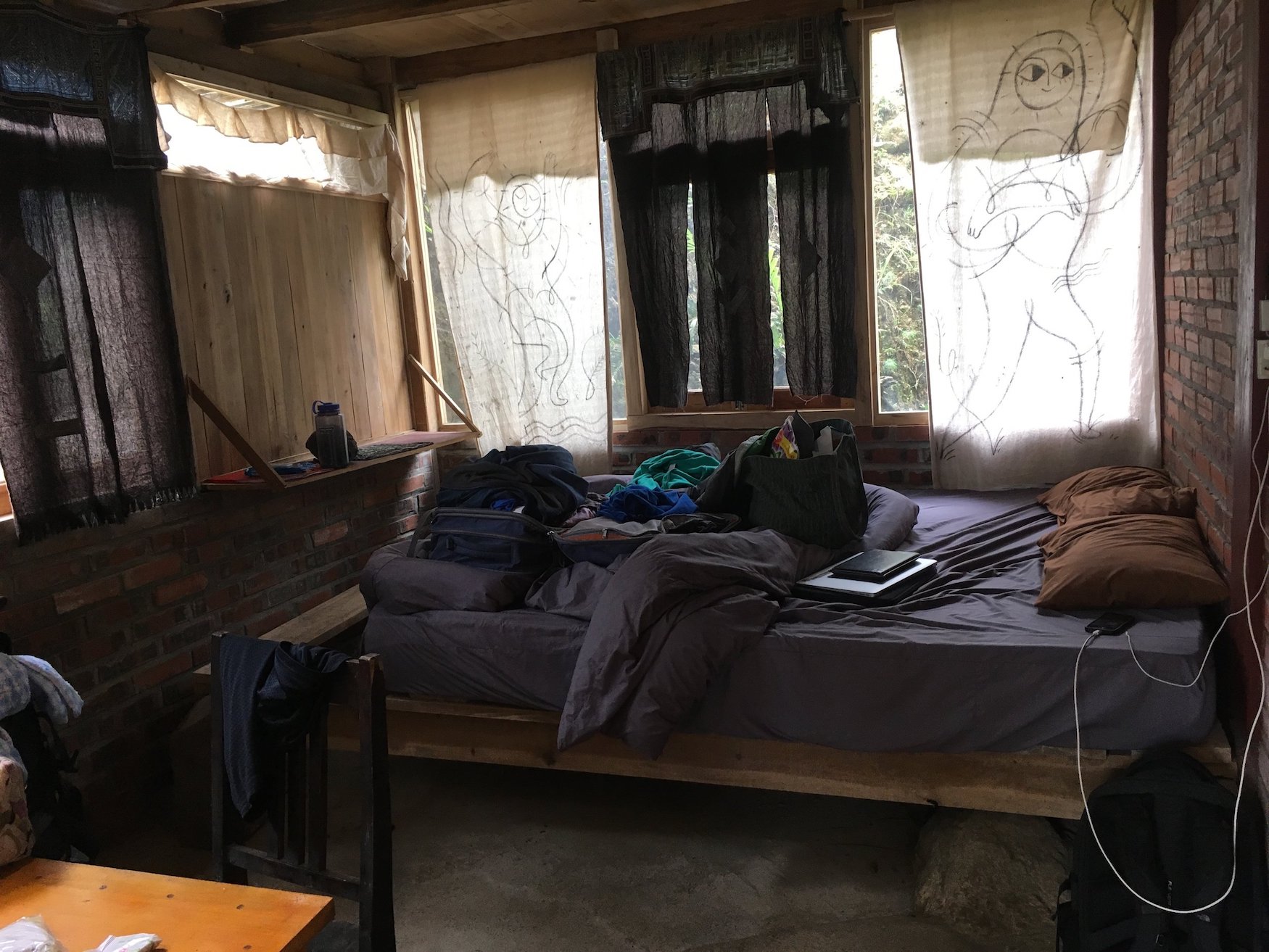 After 6+ hours of traveling from Hanoi, one of the first things I did was ask to use the bathroom. I was pointed to a wooden outhouse with separate shower and toilet stalls (remember, glamping). Unbeknownst to me, toilet paper needed to be disposed of in the trash and not in the toilet, or the toilet wouldn’t flush. I broke the toilet by putting toilet paper in it within minutes of arriving.

The homestay was run by three young Vietnamese people - the owner of the house, John, was 28, but the other two girls were probably closer to 20. Aside from John, we were the oldest people at the homestay by a good margin. There were about 10 total people staying at the house (some had been there for months already), most were around 18-20 years old, and they were a mix of Vietnamese, European, and American. After hanging out with this crew for a couple of nights, I was definitely starting to feel old.

Glamping and youth hostel aside, the crew at Lazy Crazy was very kind and the hosts were unbelievably hospitable. Everyone was super friendly and even helped us out when we didn’t have any of the right gear for trekking (hiking boots, rain jacket, etc.). On top of this, the meals at the homestay were some of the best meals I had in Vietnam. All of the food was prepared by a younger girl (maybe 16?) who (we think) was cooking and staying at the house in exchange for help with her English. Everything was served family style - each person got a bowl of rice and then could choose what else to eat with it. We ate all of our meals with the homestay while in Sapa, which turned out to be a great decision. And it didn’t hurt that the house had this amazing view: 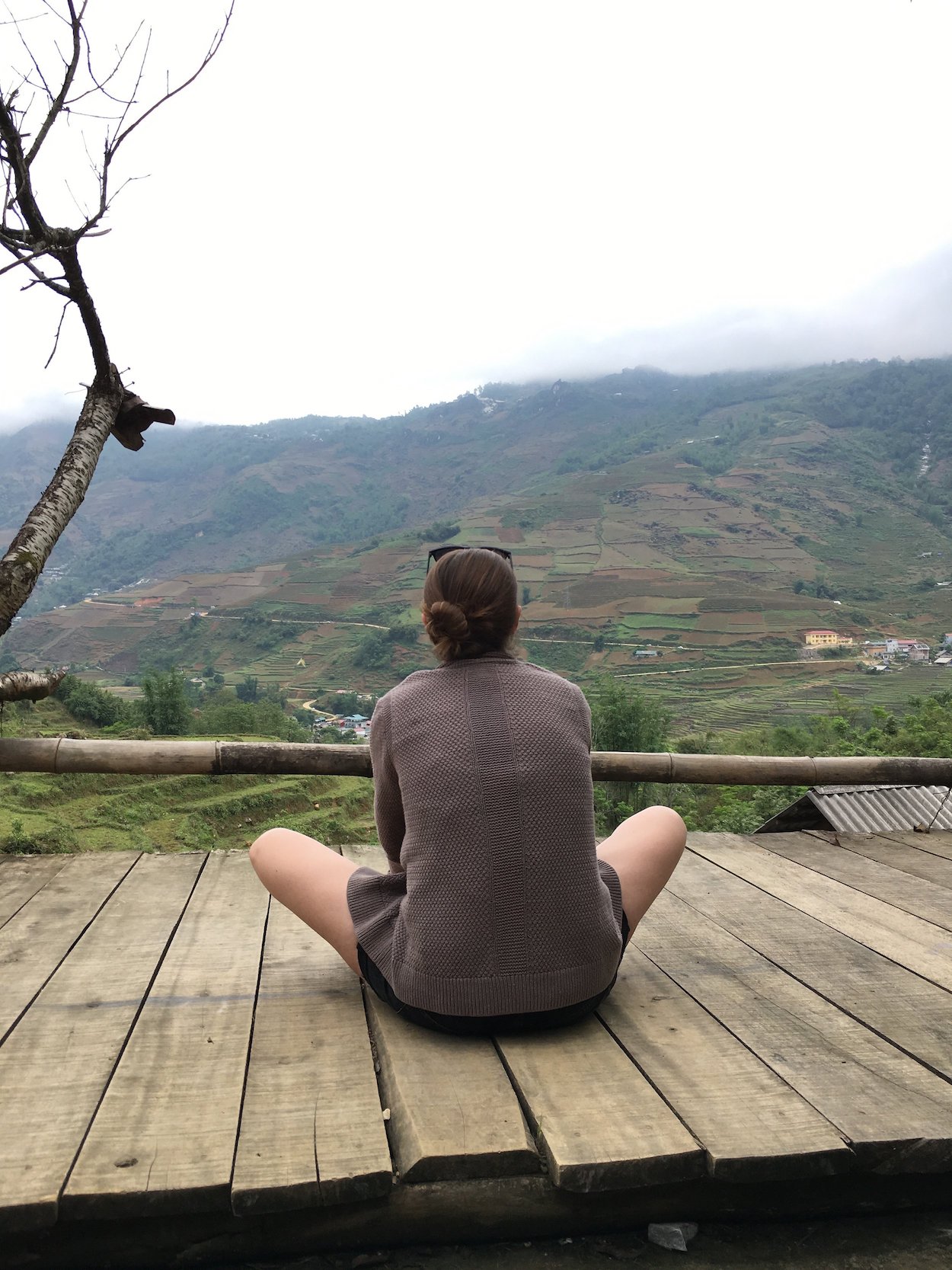 And here’s a look at the food! 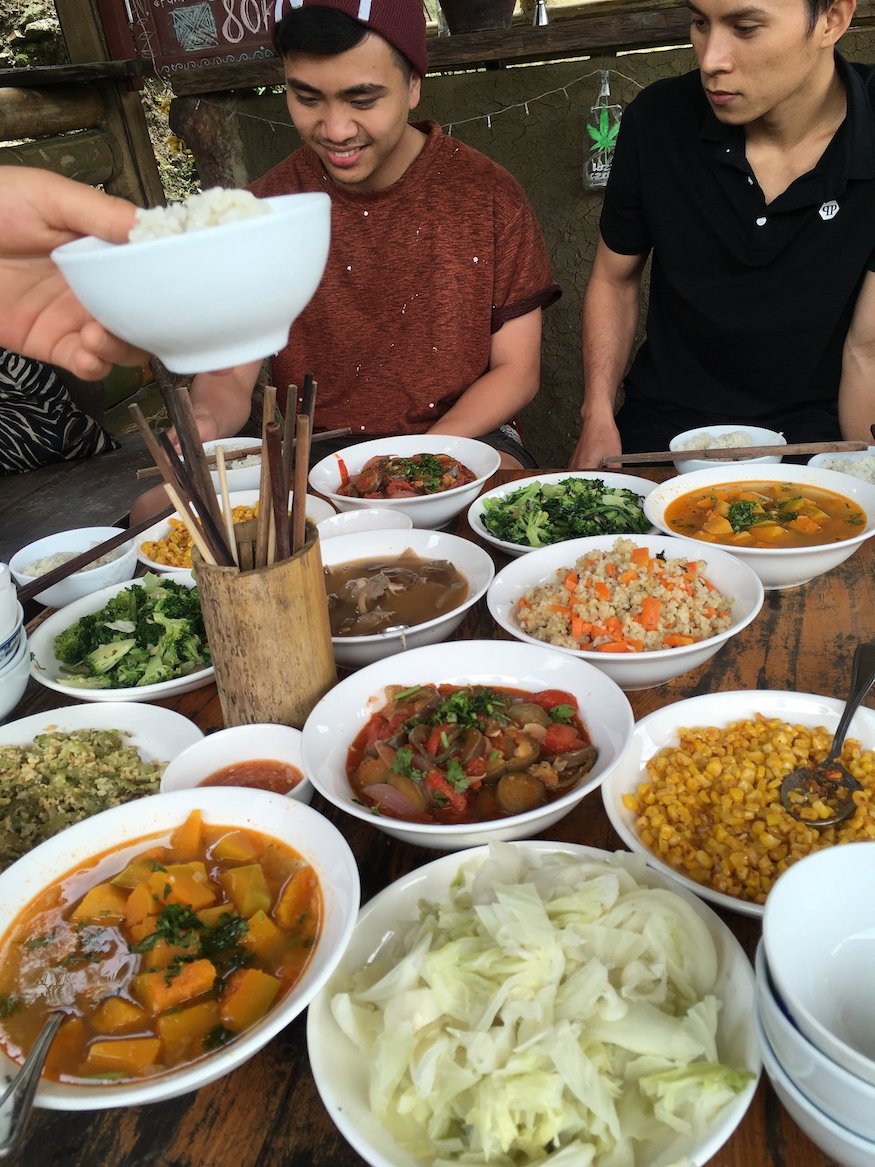 Ok, onto trekking. We hired a local guide to take us on a half day trek through Sapa. She spoke some English and provided commentary during our hike about the areas we were exploring.  (Note: I probably understood about 35% of what she said, and Sid was maybe at 50% — we’ve found that Sid often has to translate English to English for me because I have so much trouble understanding speakers with accents. This must be totally baffling for whoever we’re talking to.) Because it was the rainy season, the trails were SUPER muddy. Our hosts at the homestay tried to warn us about the mud, but I didn’t really understand until I was in it. Going downhill was often just a slow slide to the bottom.

The scenery in Sapa is beautiful. Below are a bunch of photos we took during the hike. 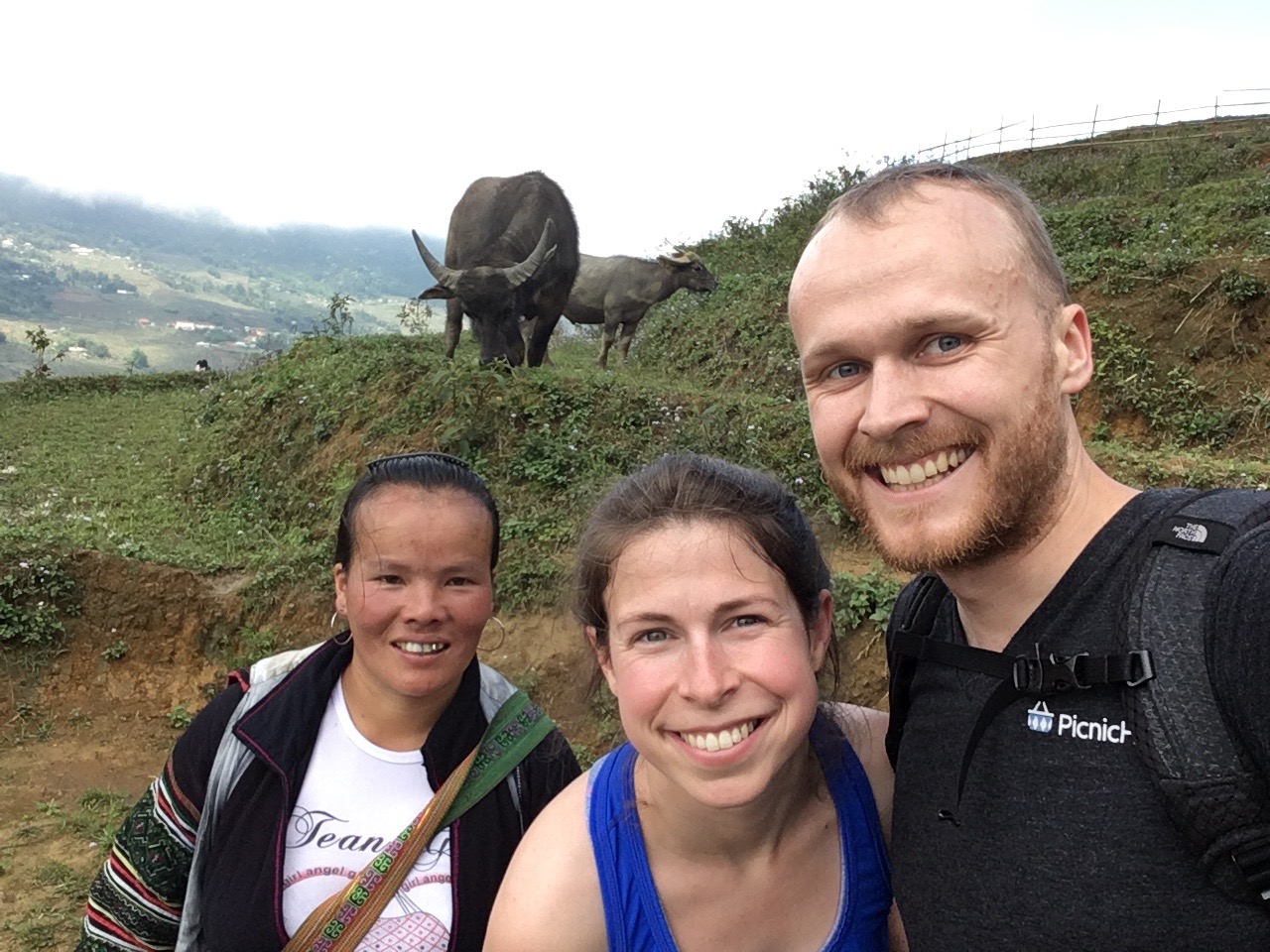 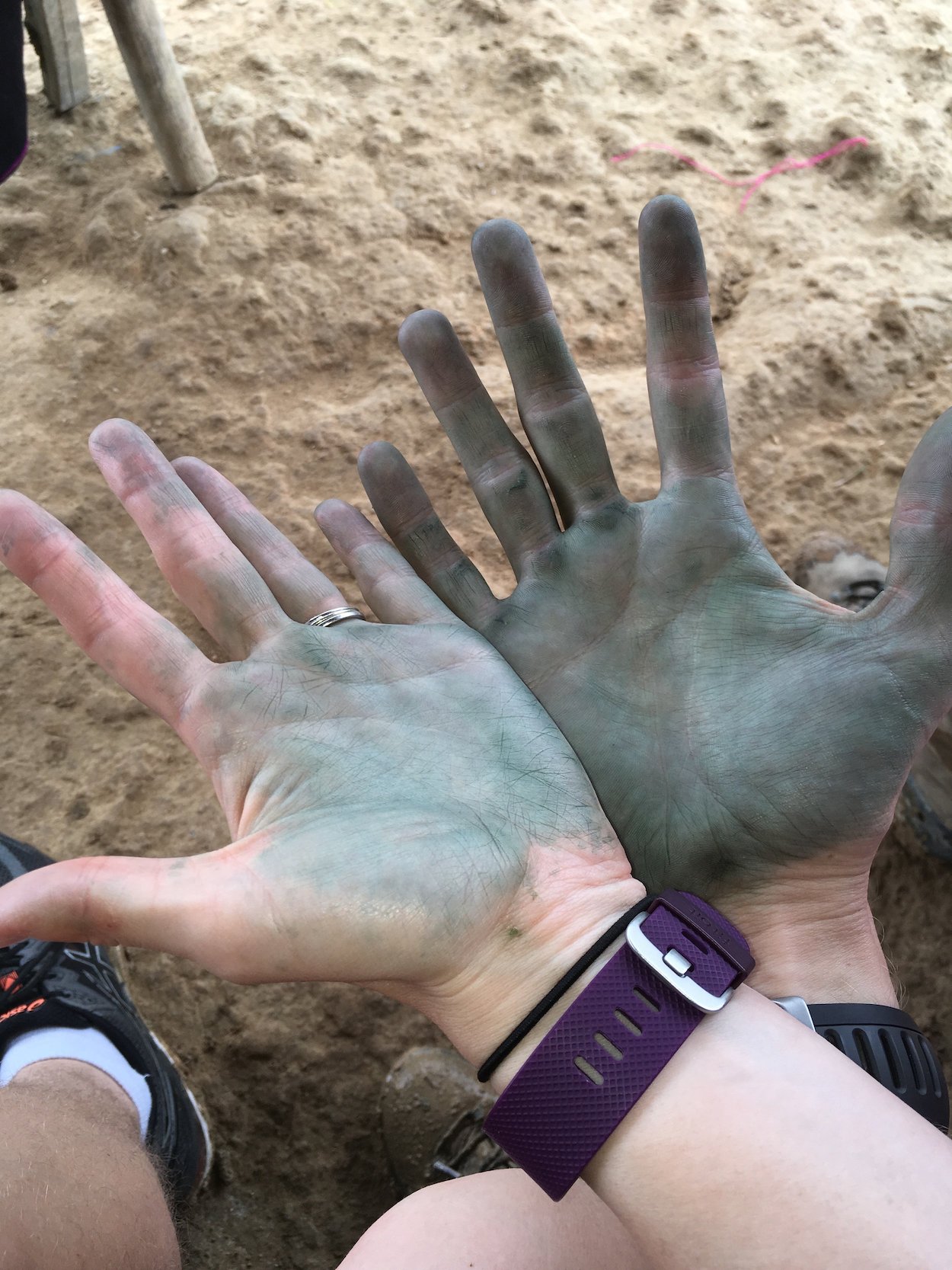 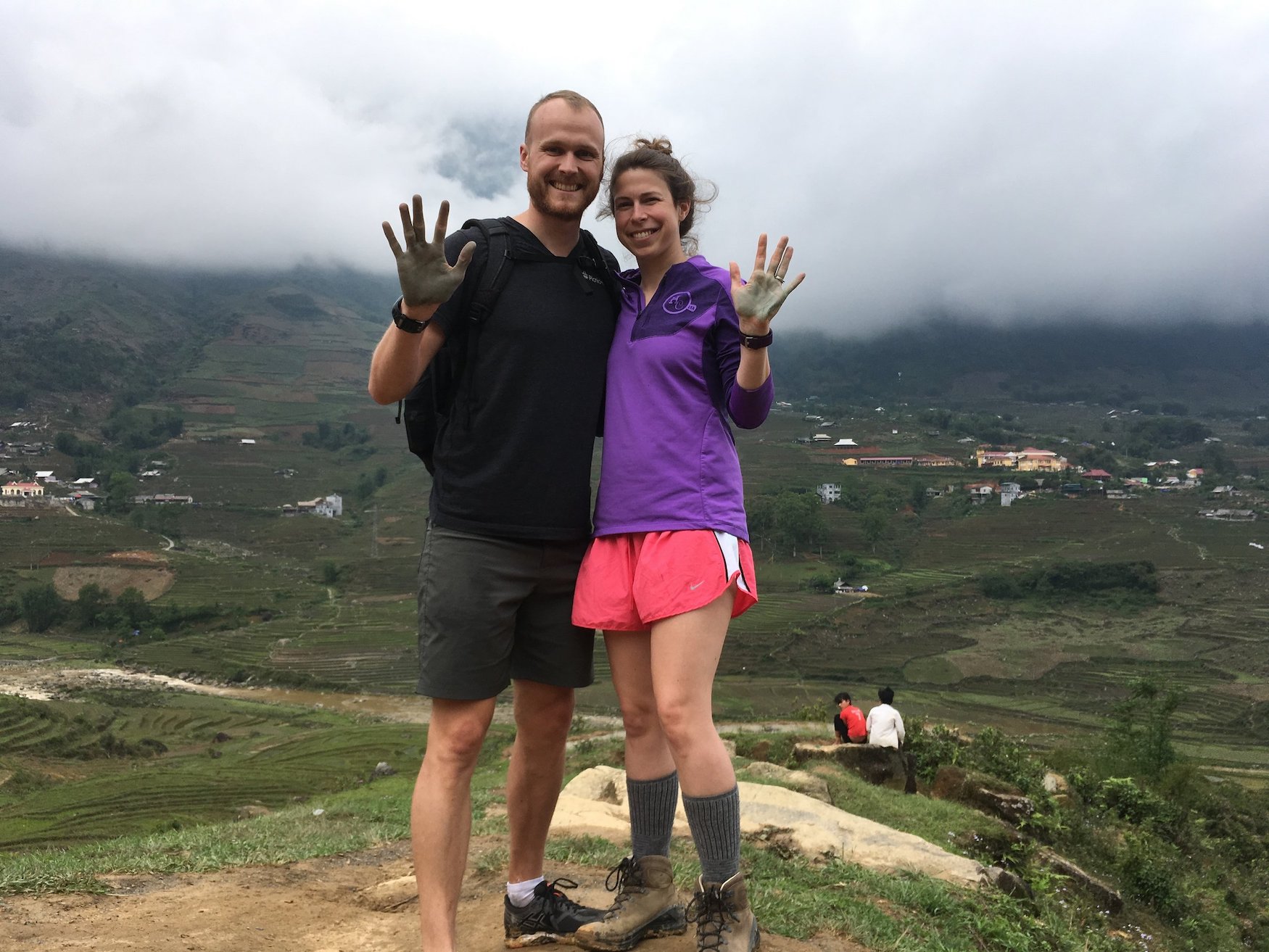 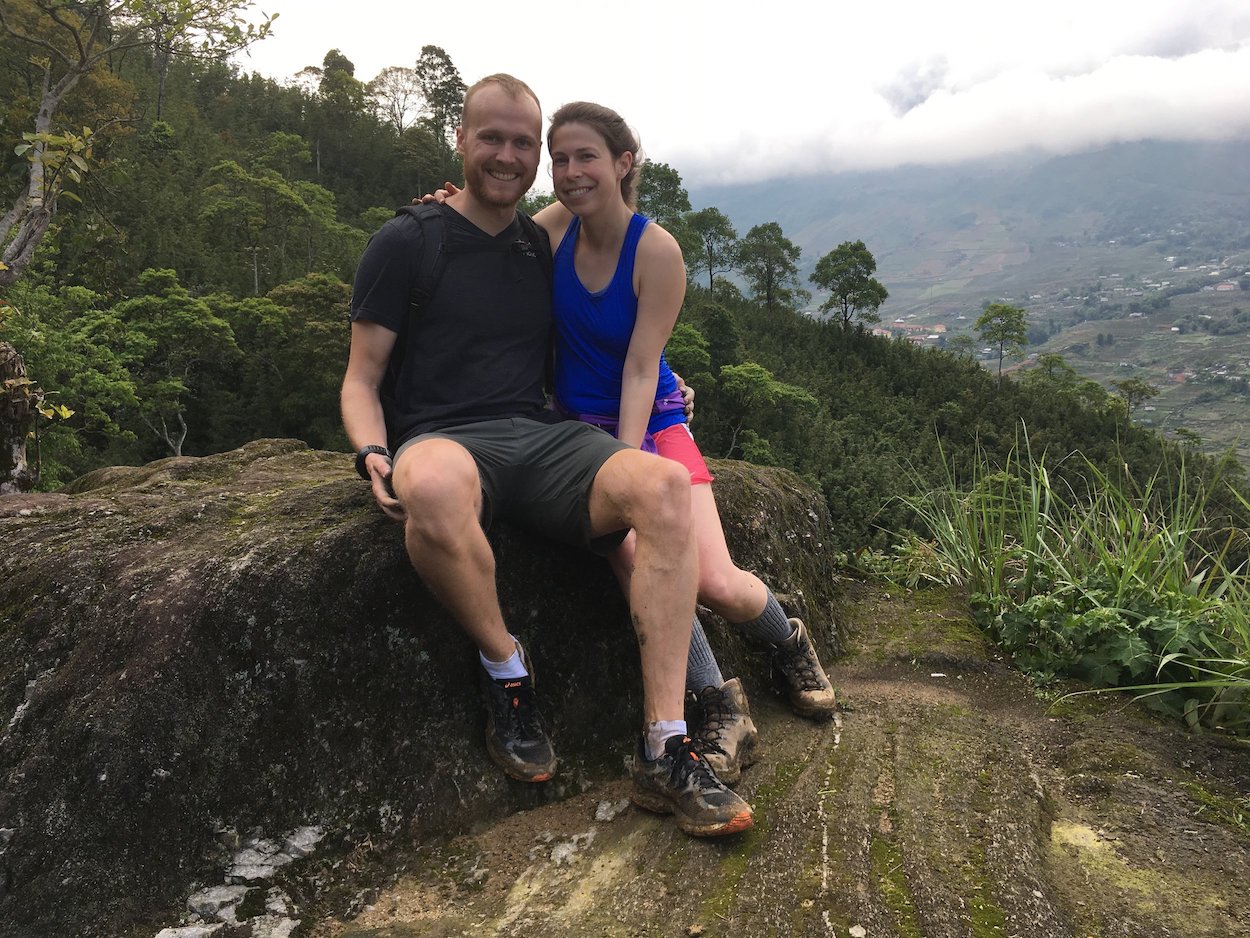 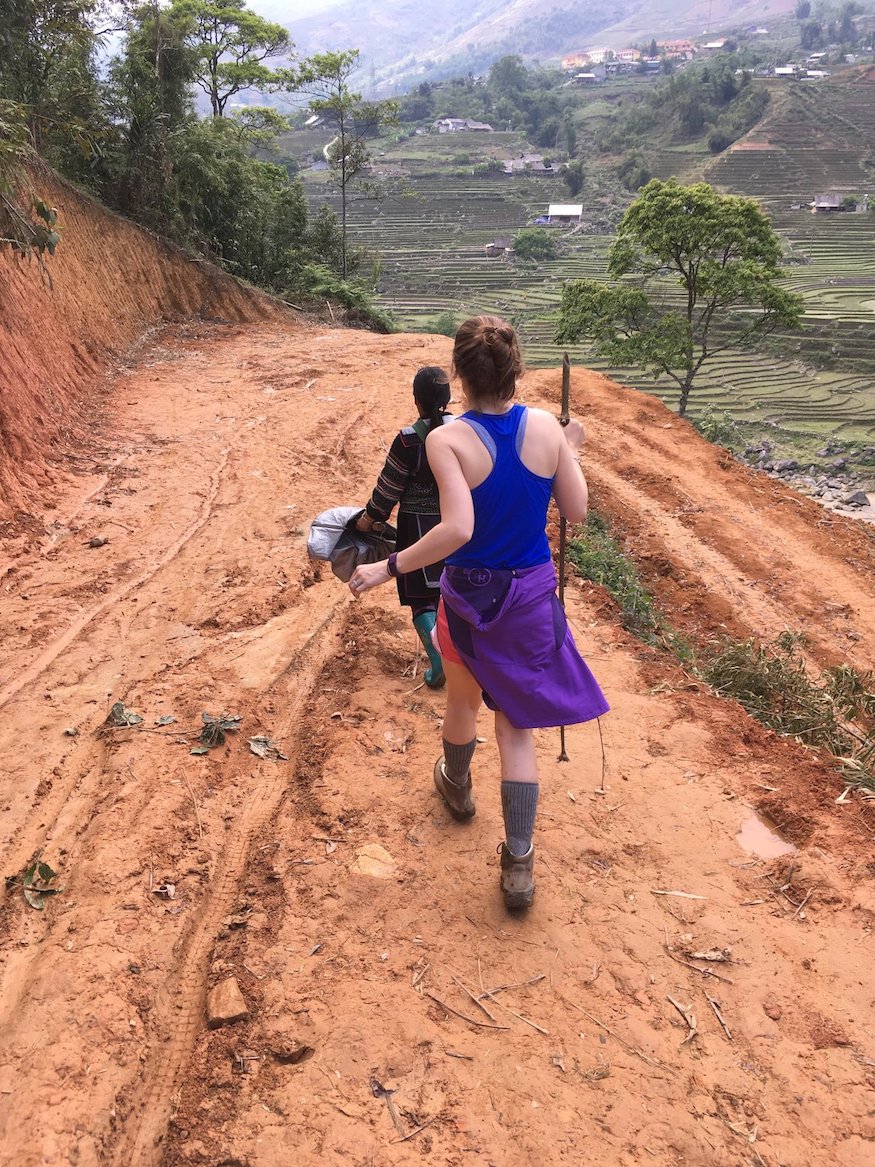 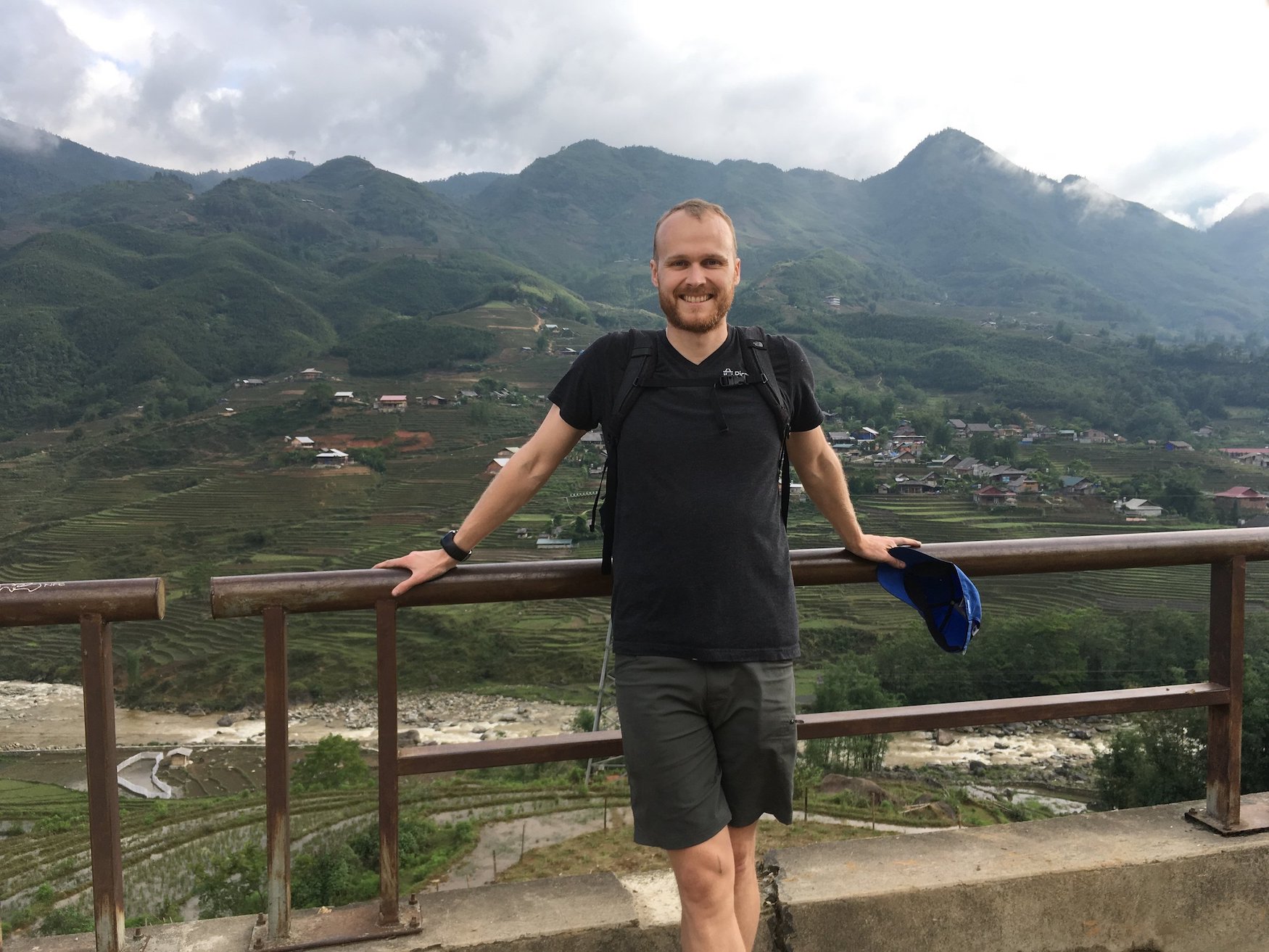 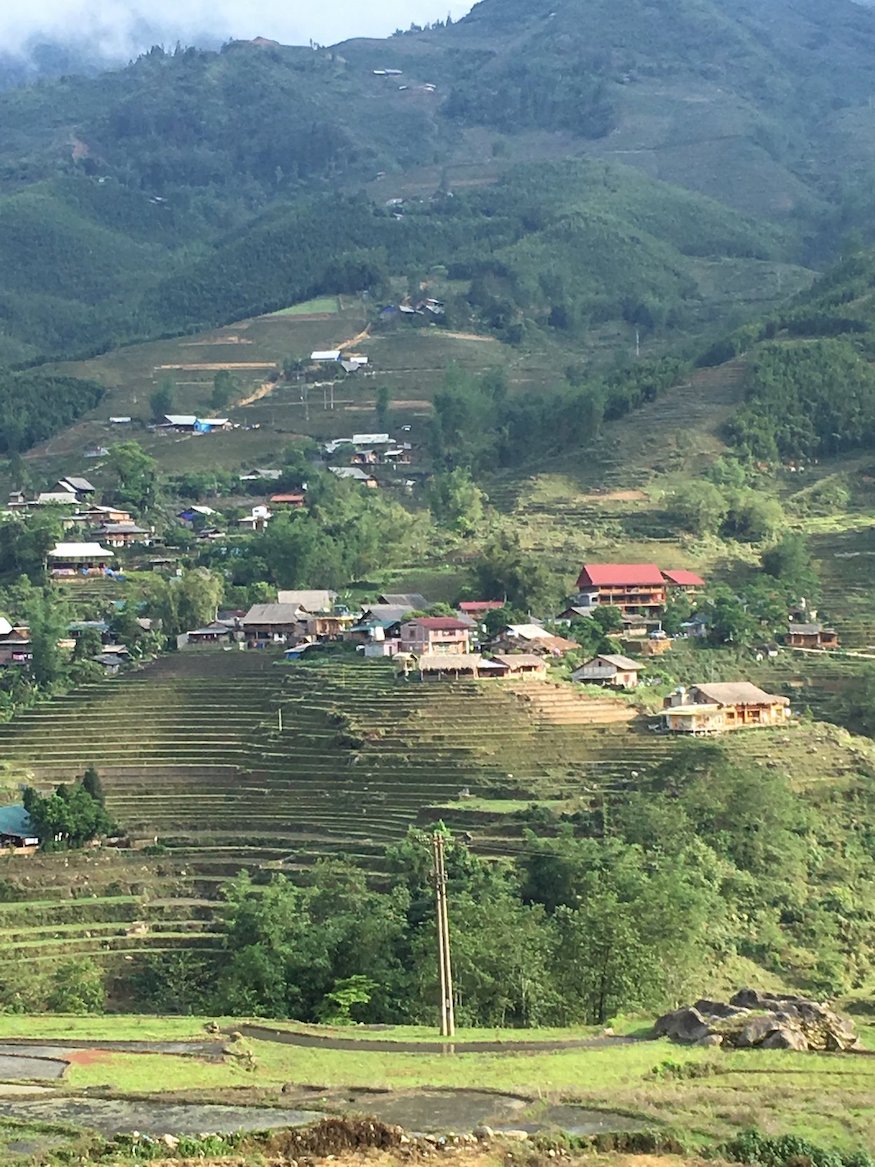 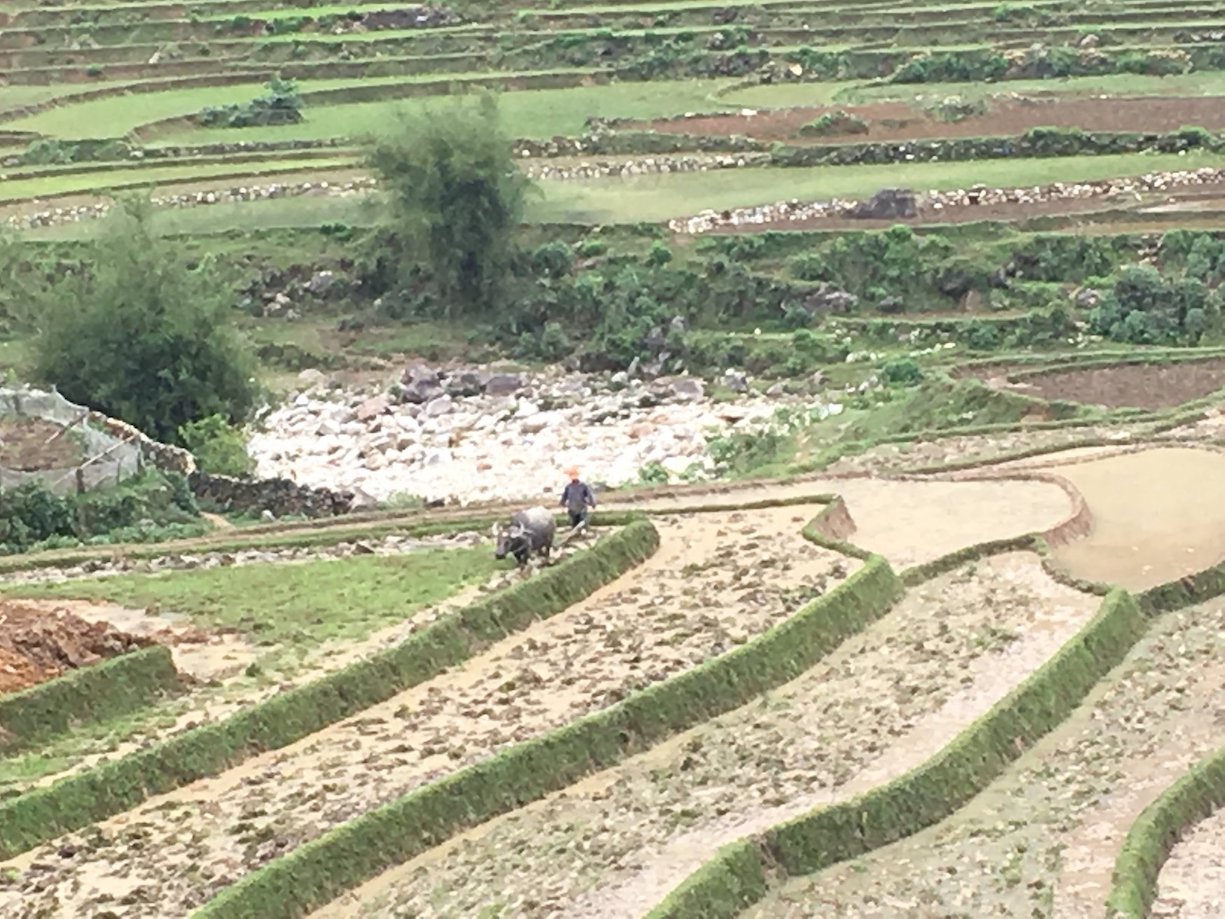 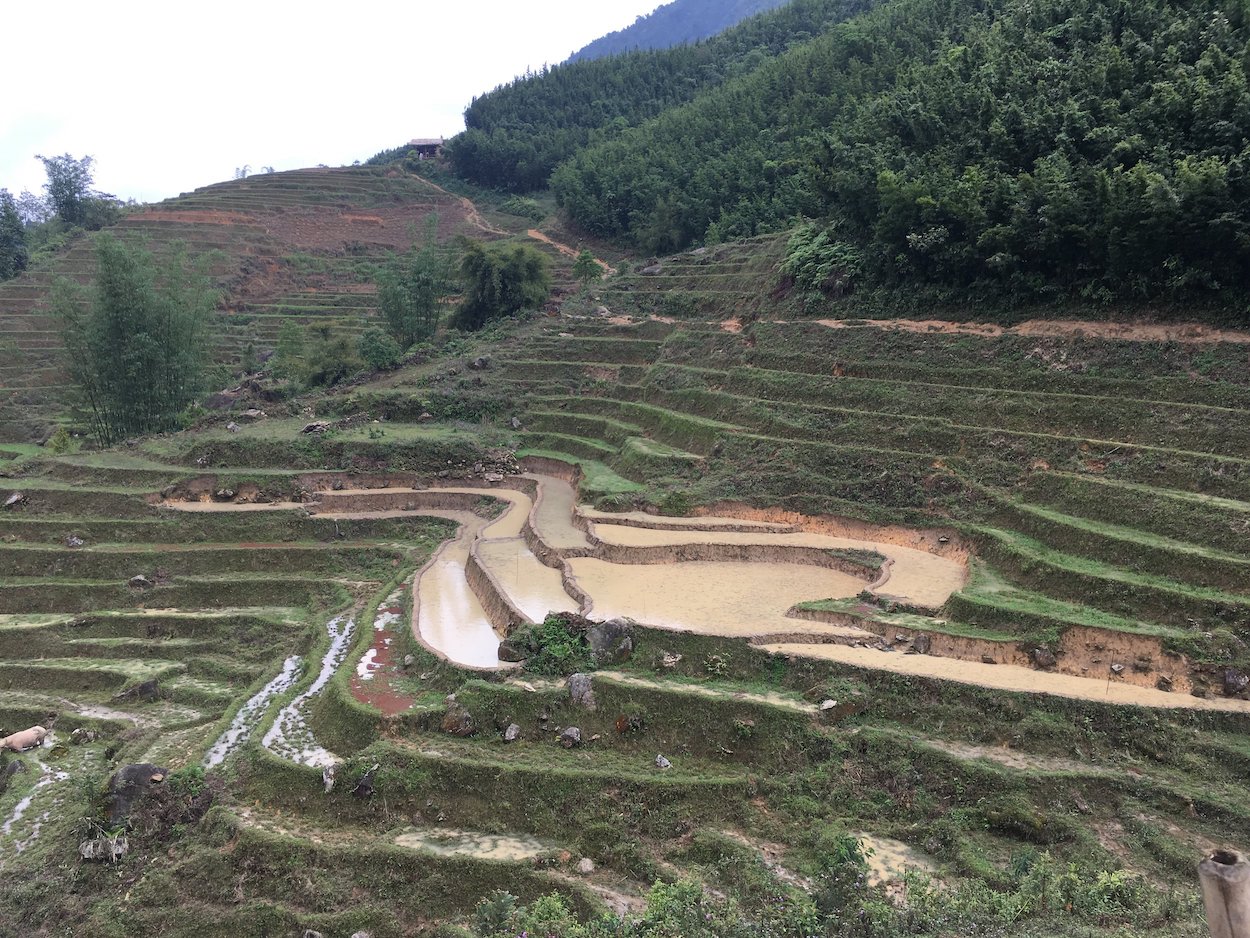 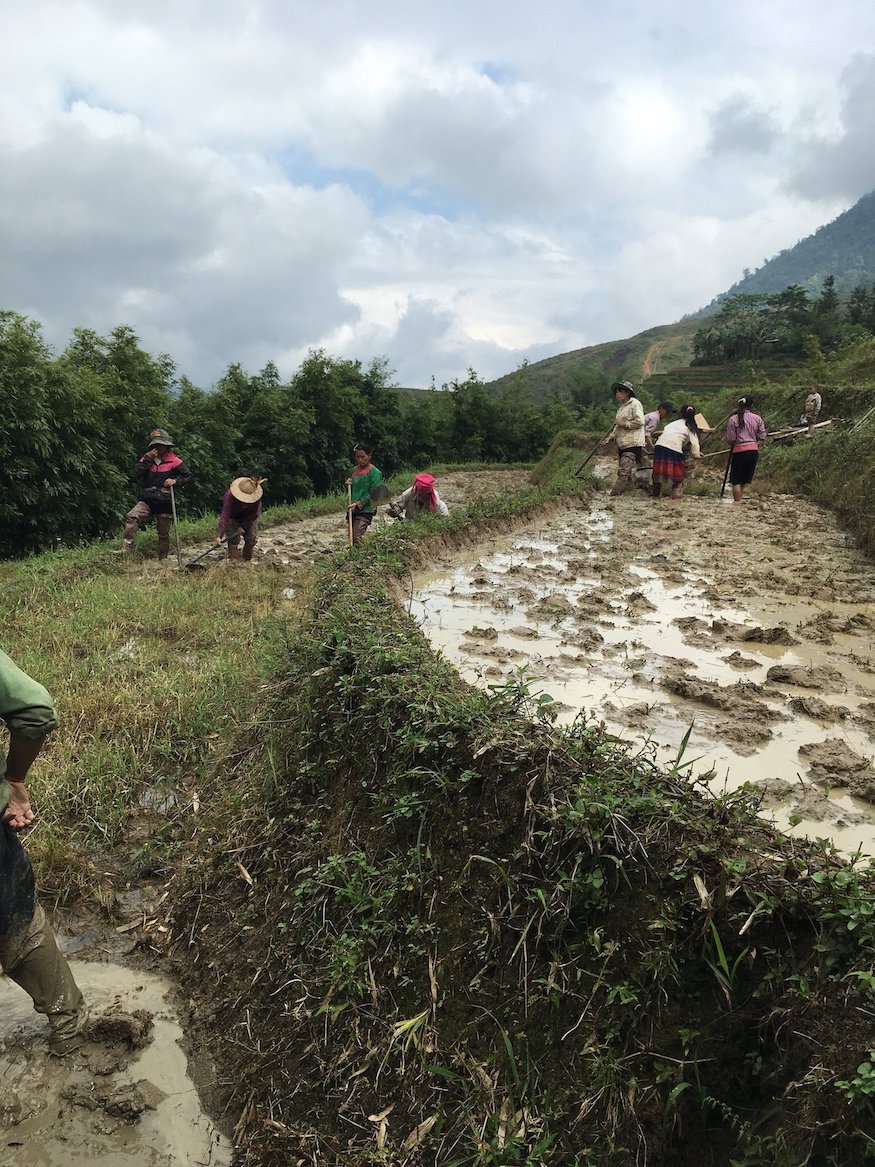 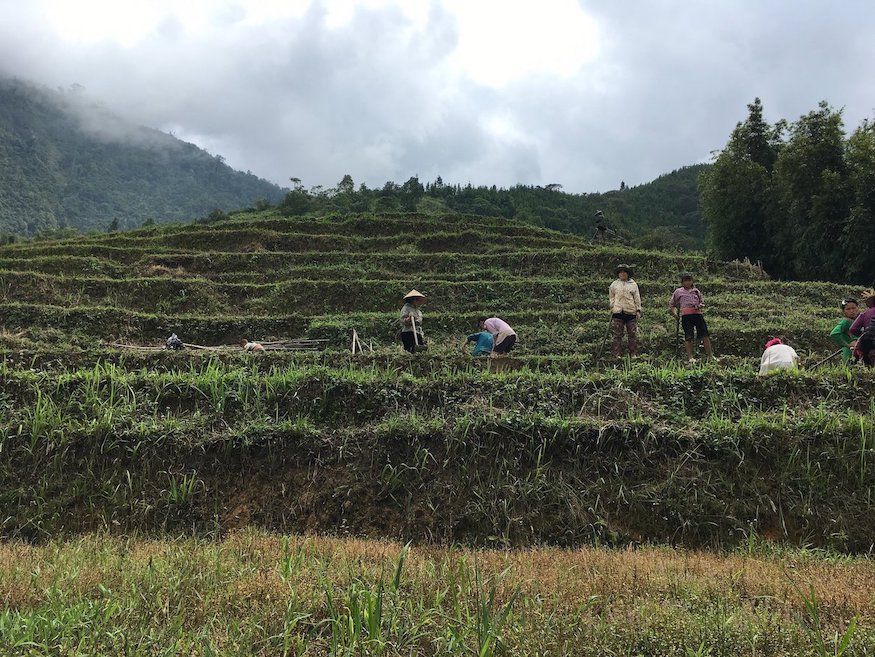 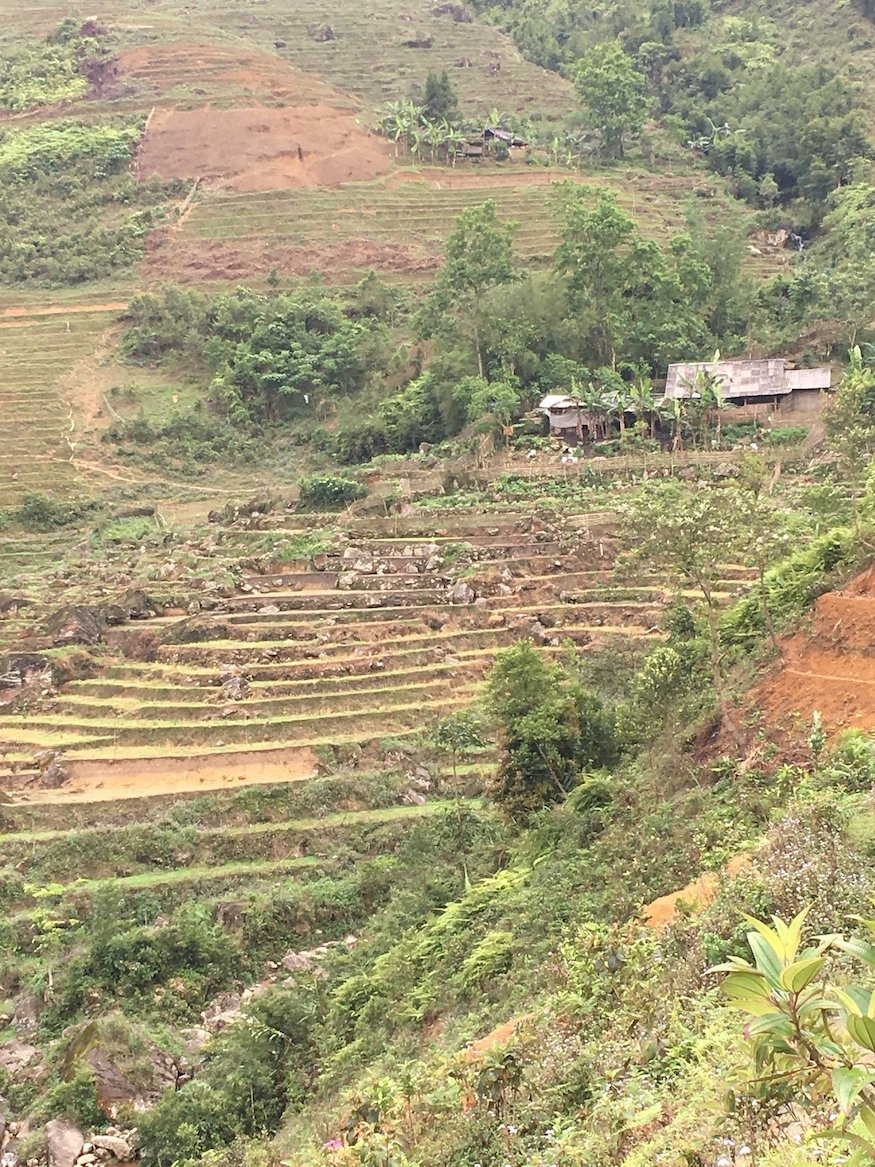 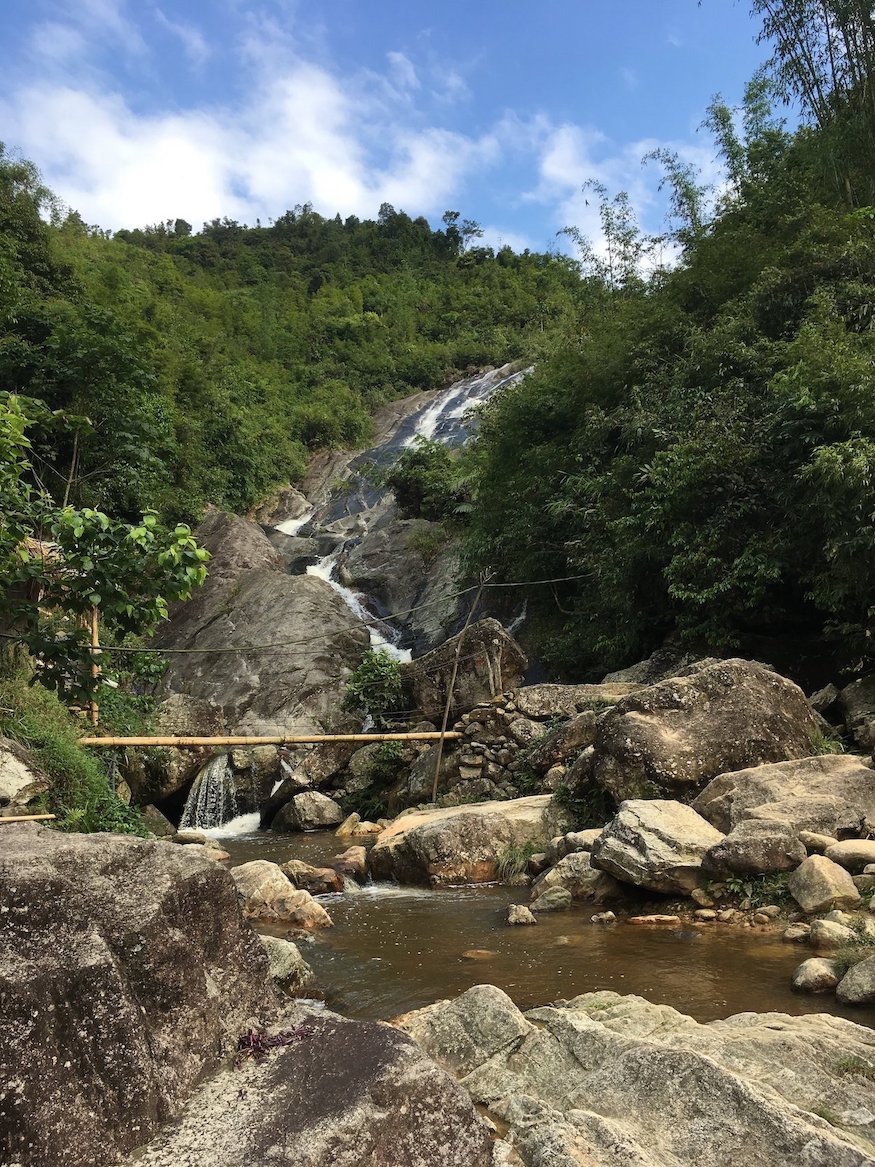 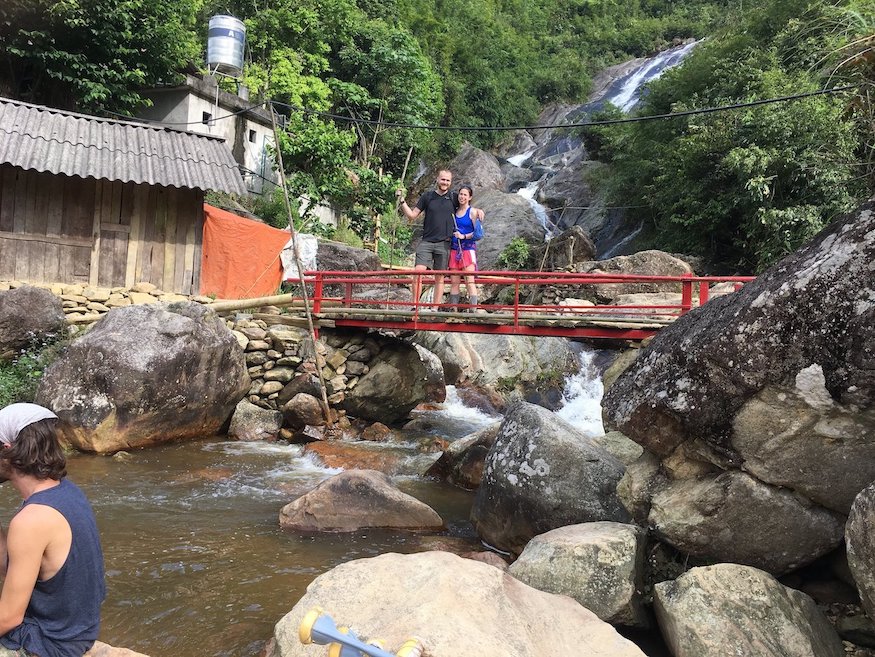 During the trek, we got up close with buffalo and a few other animals that I did not particularly want to be up close with. First of all, the buffalo are huge. I’m ok with them if they’re on one terrace and I’m on another. I’m not ok with passing so narrowly by them that we get whipped with their tails. It just seems like if someone made this multi-ton animal angry, it would have no trouble destroying you.

Towards the end of the hike, we encountered one of my worst animal fears when a big black snake crossed our path. Some friends can probably imagine how I reacted to this.. it wasn’t pretty and I was terrified. Our guide thought it was hilarious that I was scared of an animal that wasn’t poisonous! Ha.ha. Luckily, we were almost back home, because I couldn’t wait to get off of that mountain.

This brings me to an aside — animals in Vietnam. There were animals everywhere. Stray cats and dogs, farm animals, and even one or two that we honestly couldn’t identify. Here are a few of the animals we encountered during the trip: 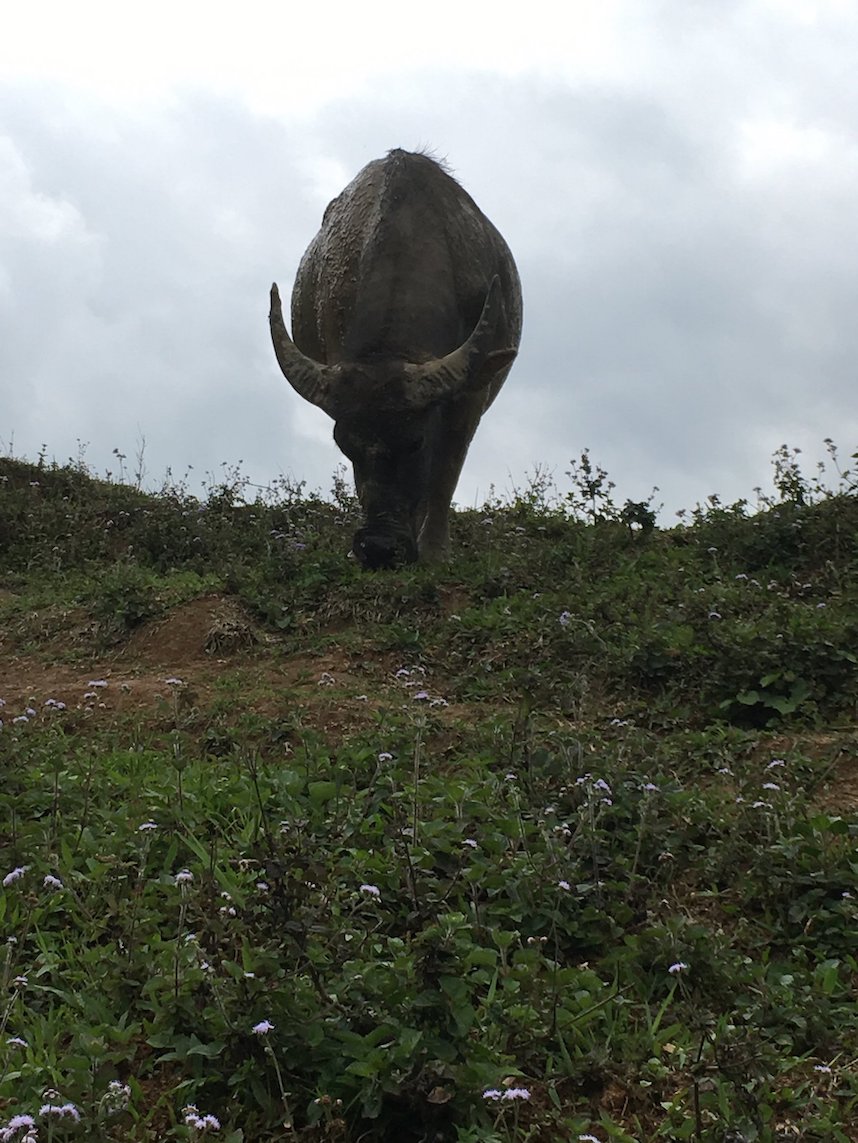 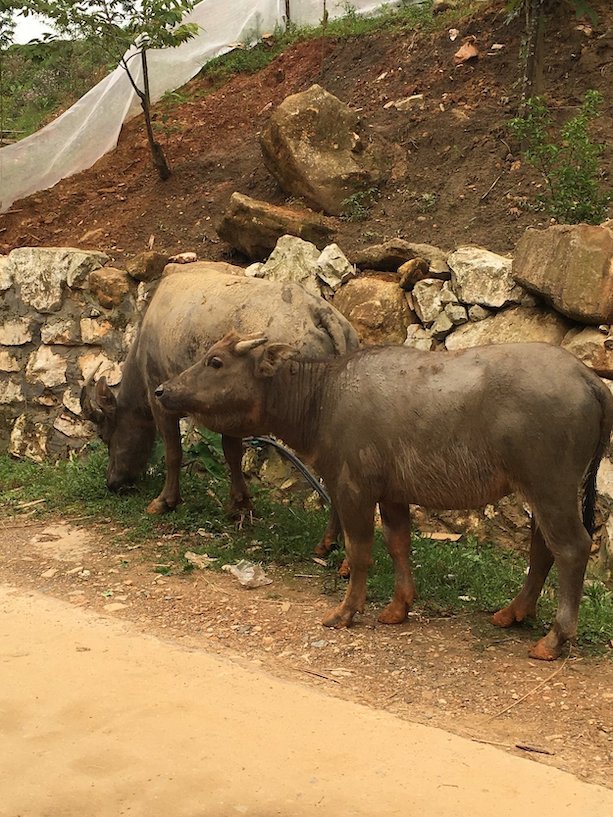 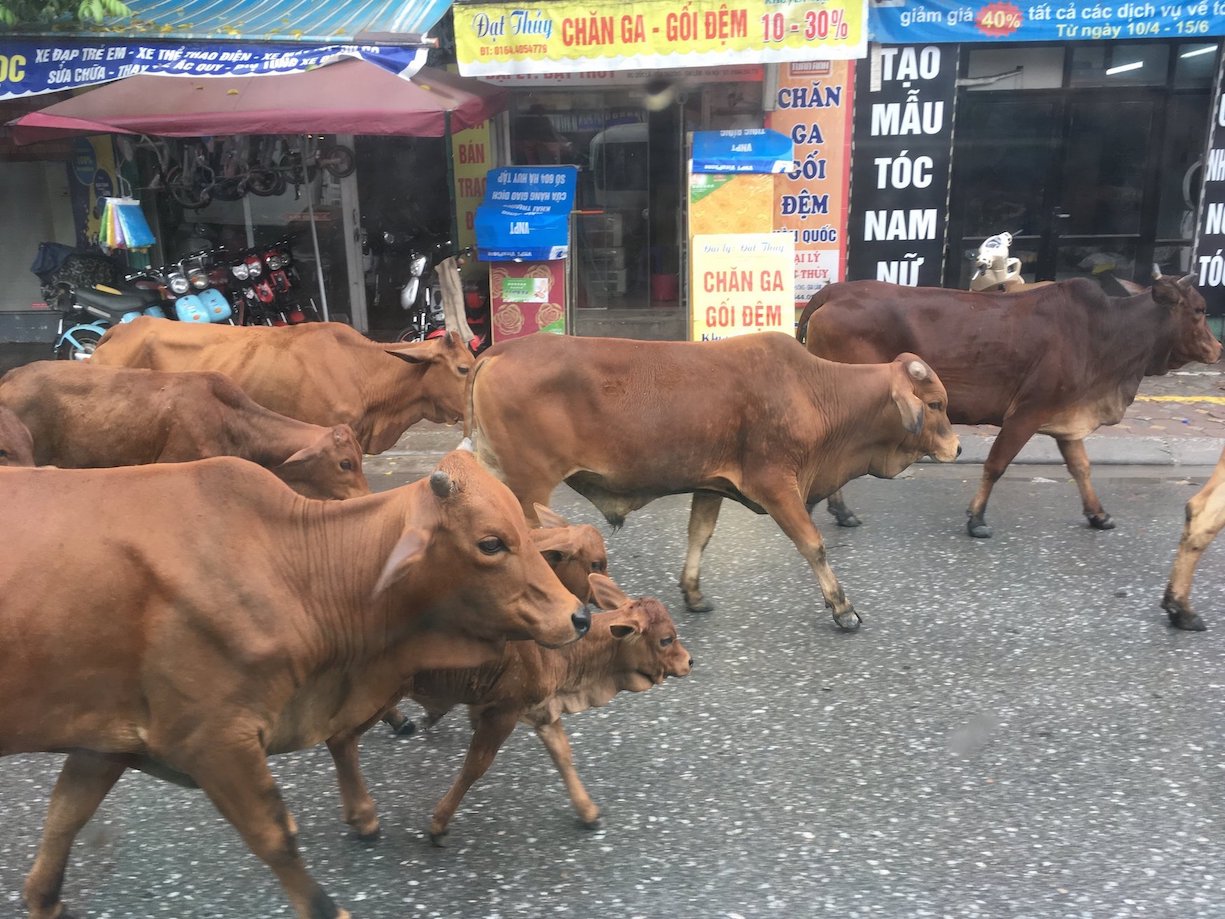 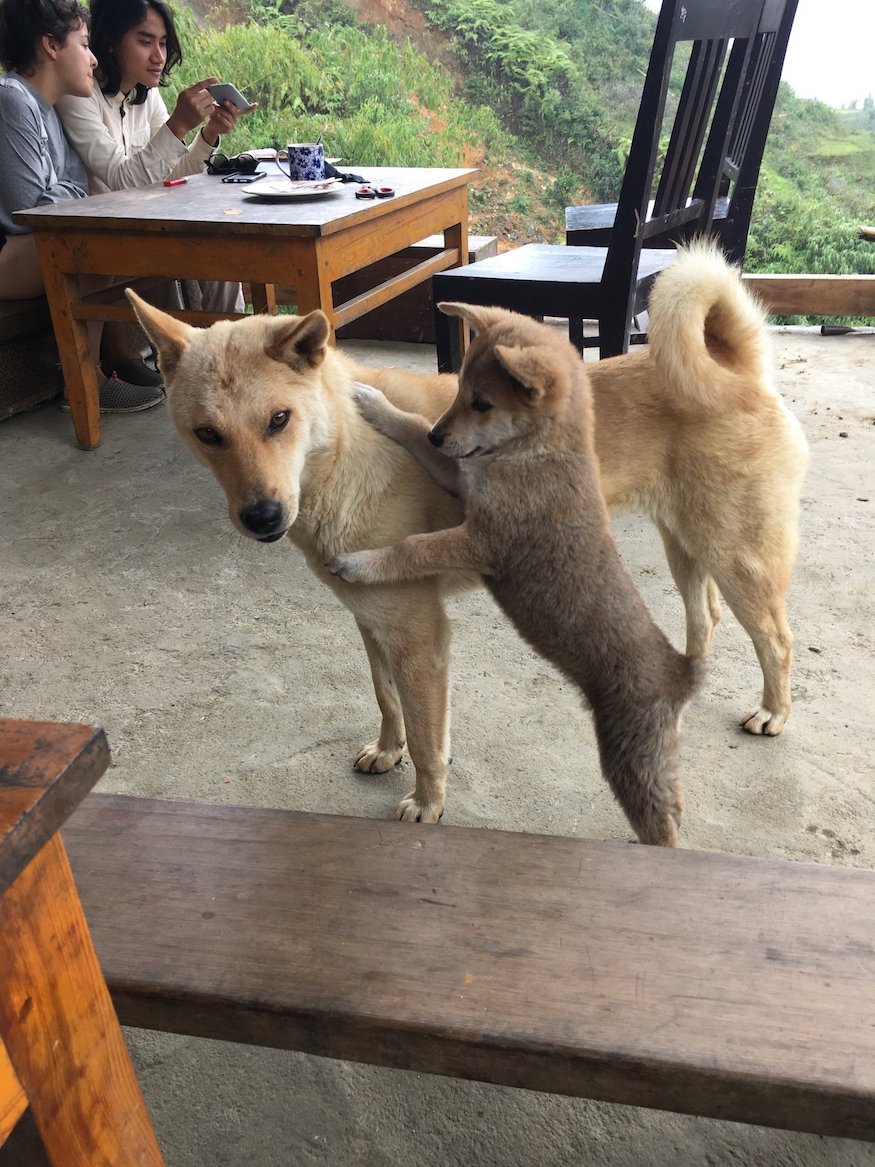 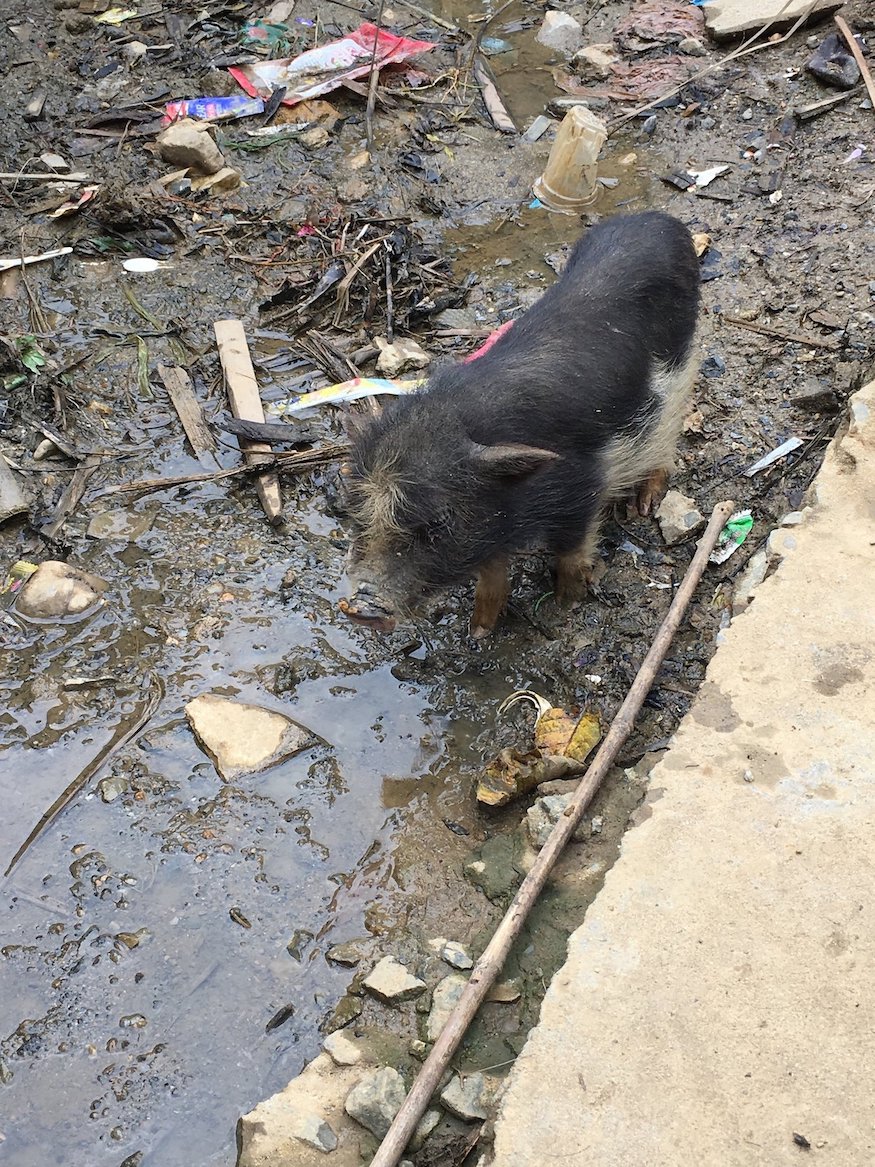 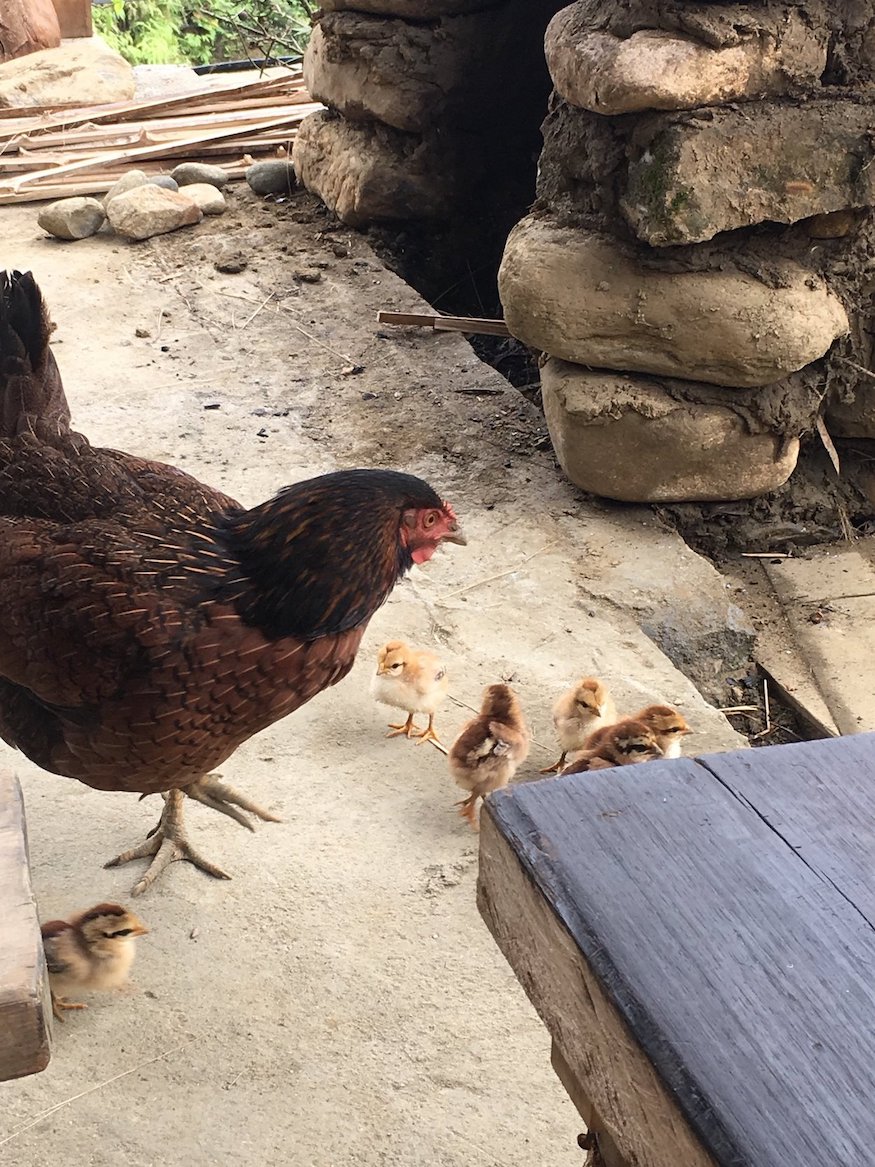 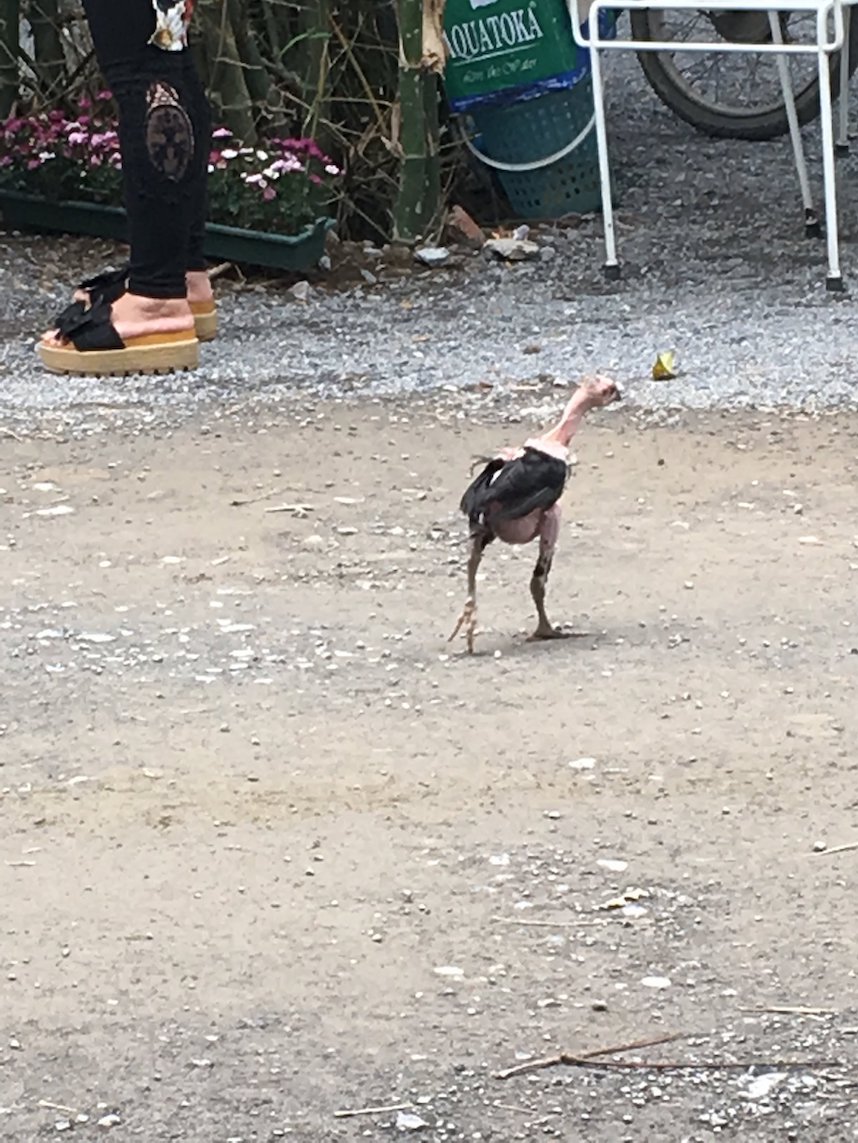 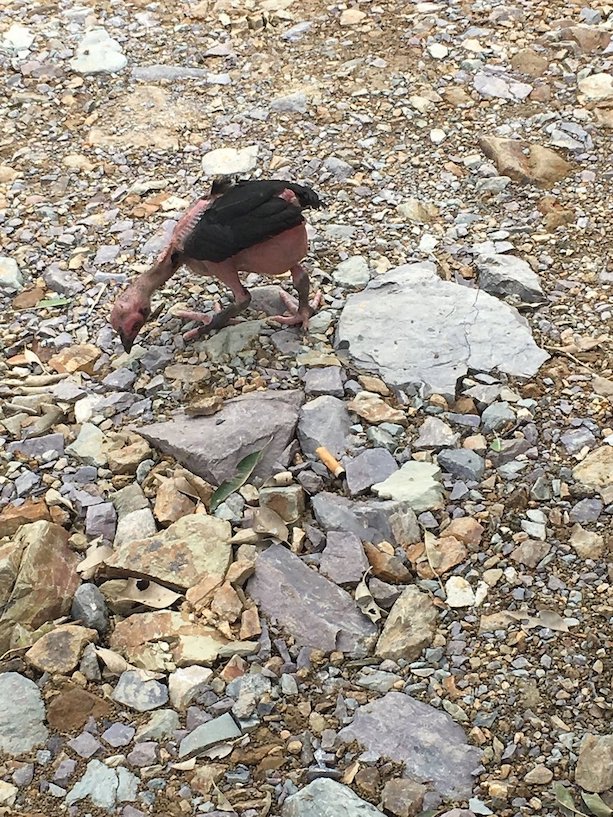 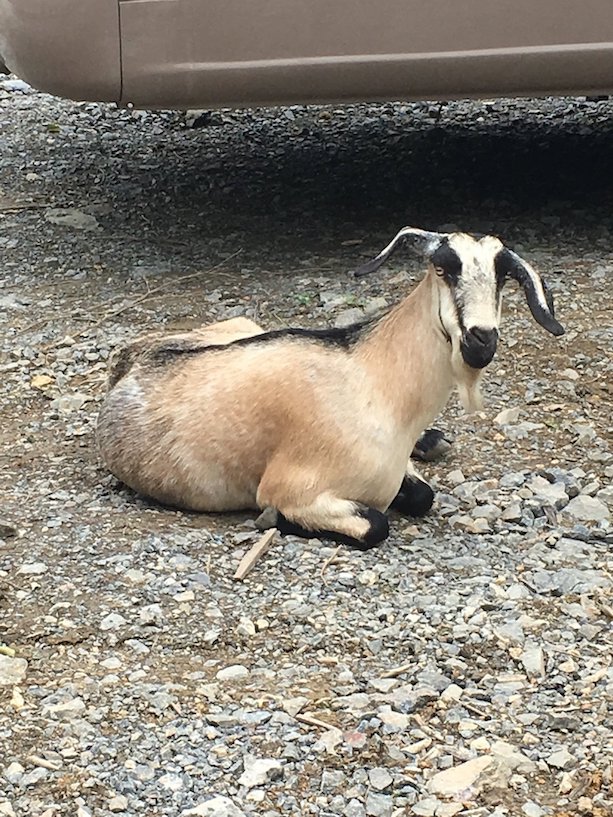 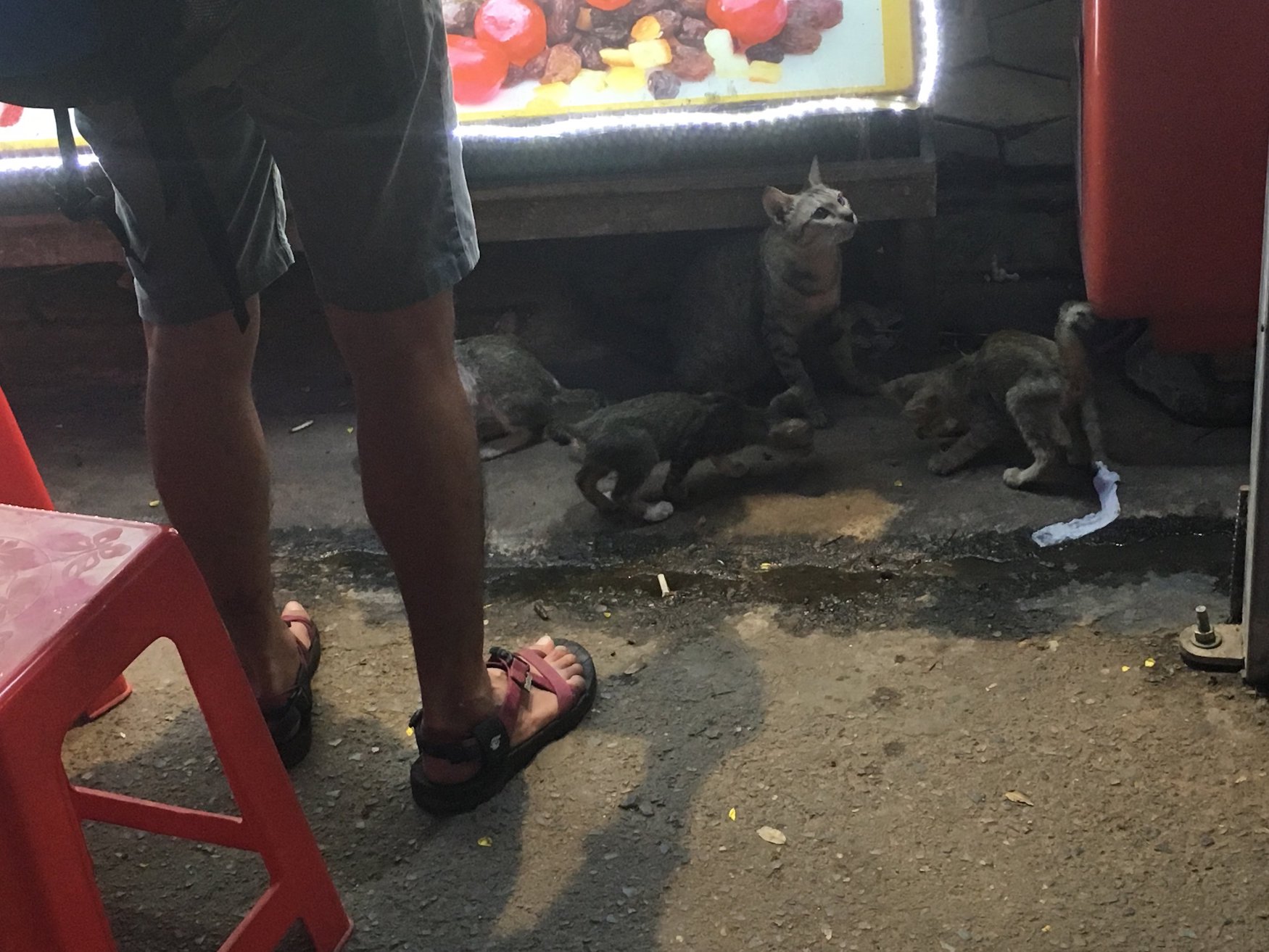 All in all, Sapa was an experience I’m certainly glad we had, but I think two days was enough.