Turns out, the theme song for English-speaking tourists in Vietnam is none other than “Hello Vietnam!” (youtube: https://www.youtube.com/watch?v=WwOY1o16T4s). One of the national airlines plays it on their flights and we had multiple hosts and tour guides sing it to us during our stay. So welcoming! (This also made me think… do we have something similar in the US? Grand Ole Flag? God Bless the USA? Party in the USA…?) 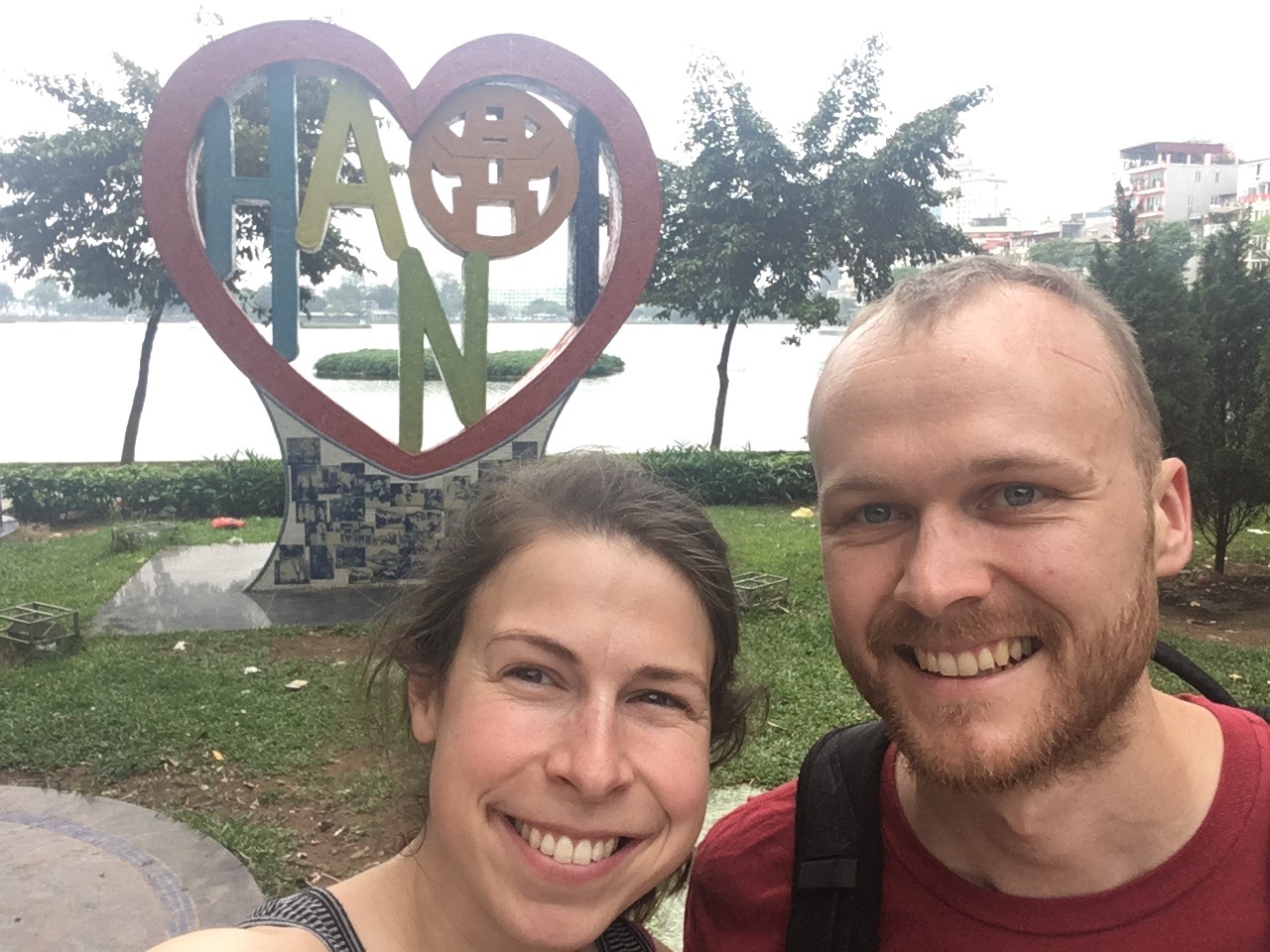 We began our two week Vietnam adventure in Hanoi, the capital and second largest city. Hanoi is in north Vietnam and made a great home base for excursions to more remote areas in the northern part of the country.

We stayed about a mile outside of downtown Hanoi (the “Old Quarter”), and getting around by walking was easy except for one issue - crossing the street. There are motorbikes everywhere, and very few traffic rules (or at least very few enforced traffic rules), which made crossing the street somewhat terrifying. The basic strategy is to just go and walk straight, keeping a steady pace, regardless of the vehicles or people that may be coming your way. I had a tough time with this, and would try to walk calmly at first, but then end up running to the nearest sidewalk as soon as I saw something coming. Sometimes I would insist we travel to places making only right (or left) turns to avoid crossing. Sid was better at remaining calm, but note that he did get his heel run over by a car at one point.

These are the streets that people are trying to cross:

One of my favorite parts of Hanoi was the Night Market. The market happens Friday-Sunday around a lake in the Old Quarter, and serves as a gathering place for shopping, eating, and entertainment for both tourists and locals. Plus, they shut down a large area to traffic so you can walk freely without the fear of being run down by a rouge motorbike. Below are some of the many fun things going on at the Night Market: 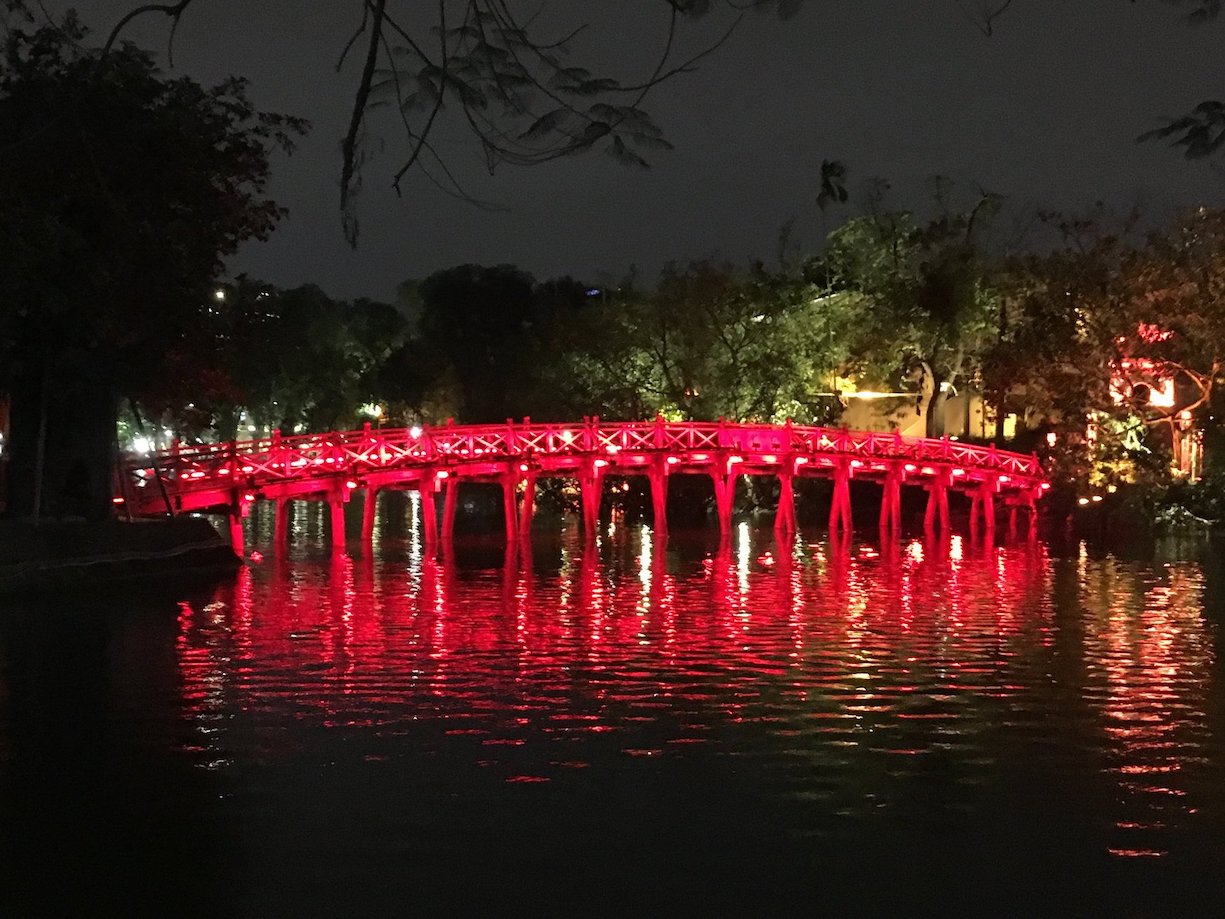 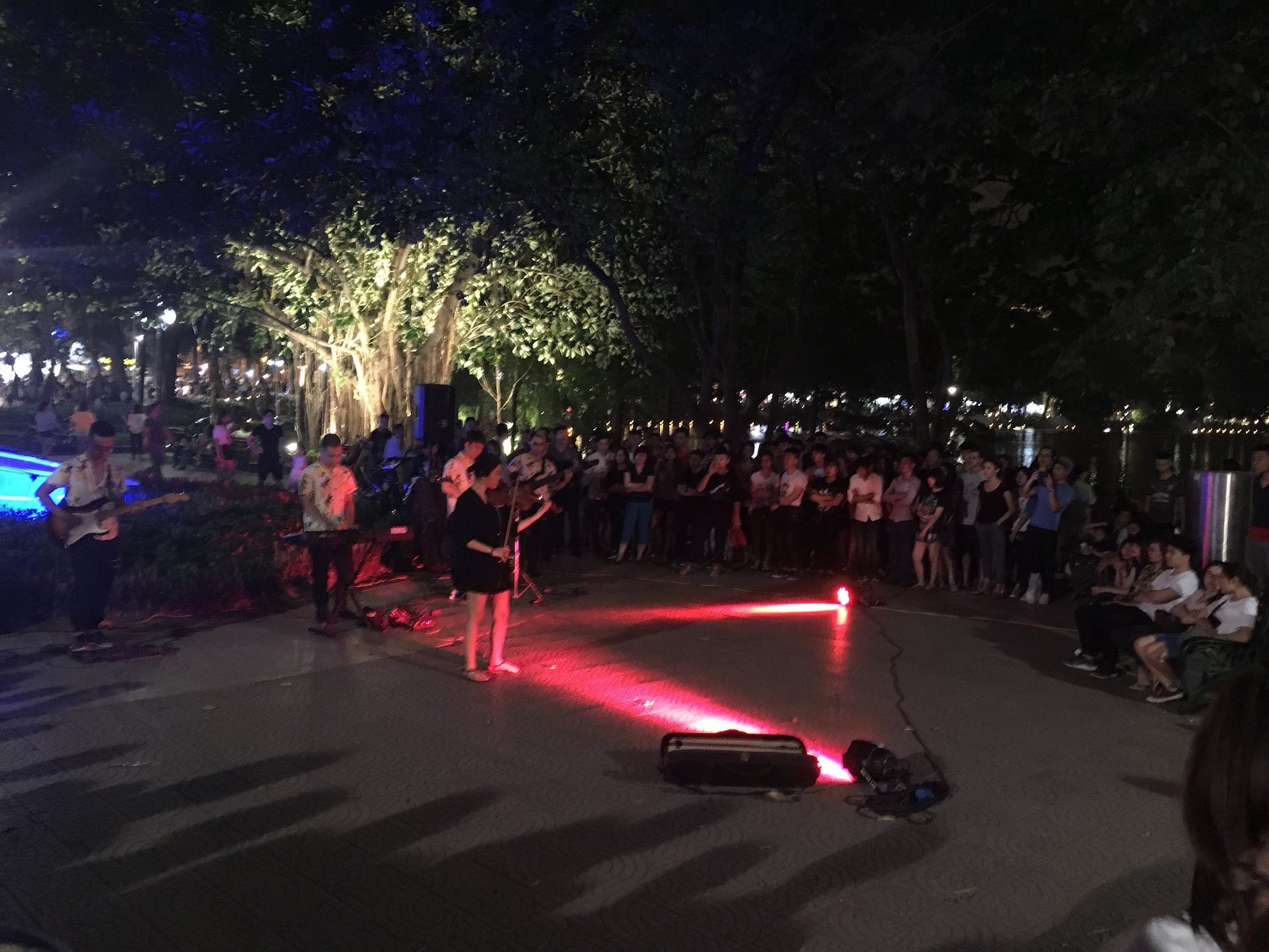 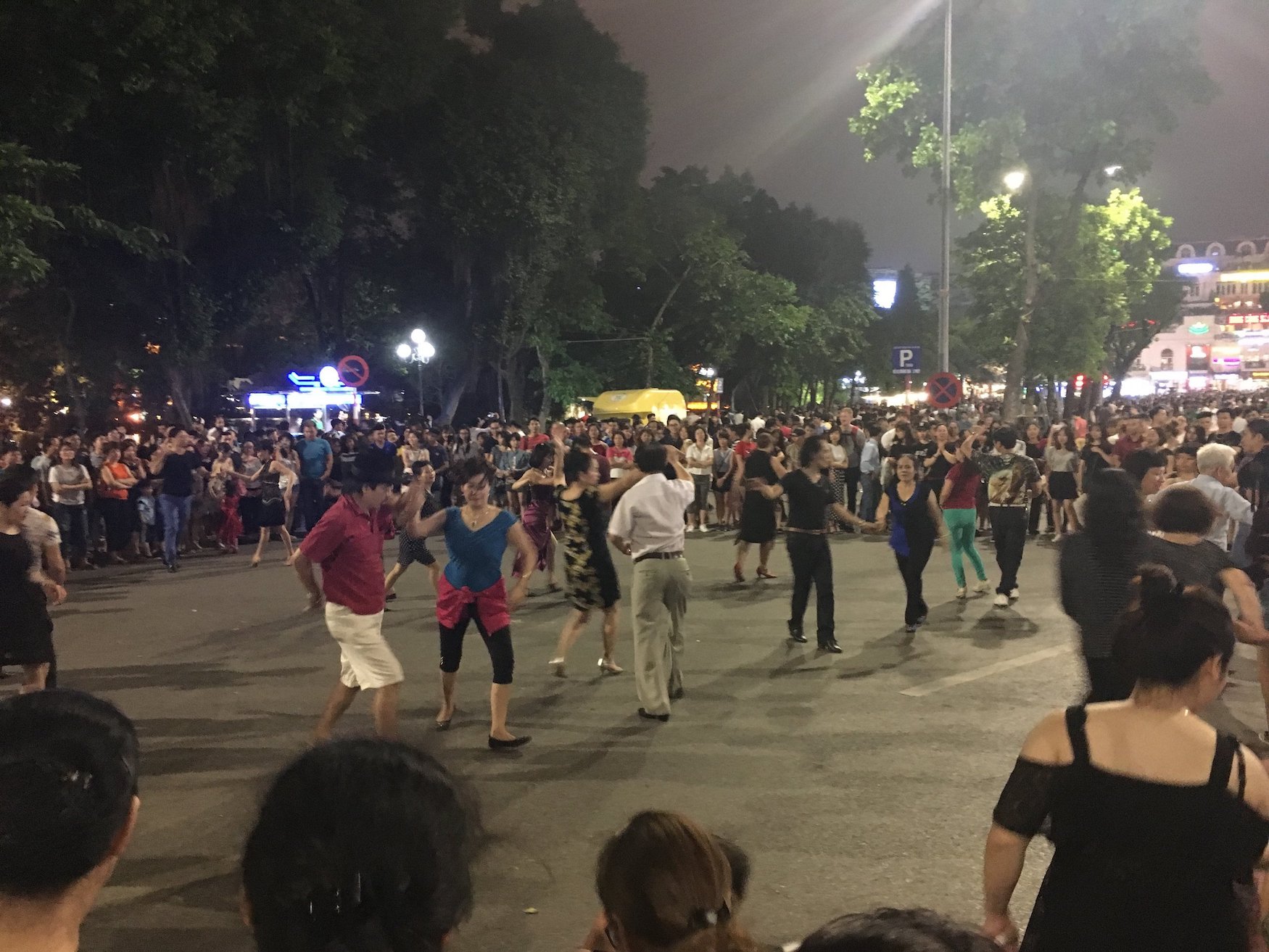 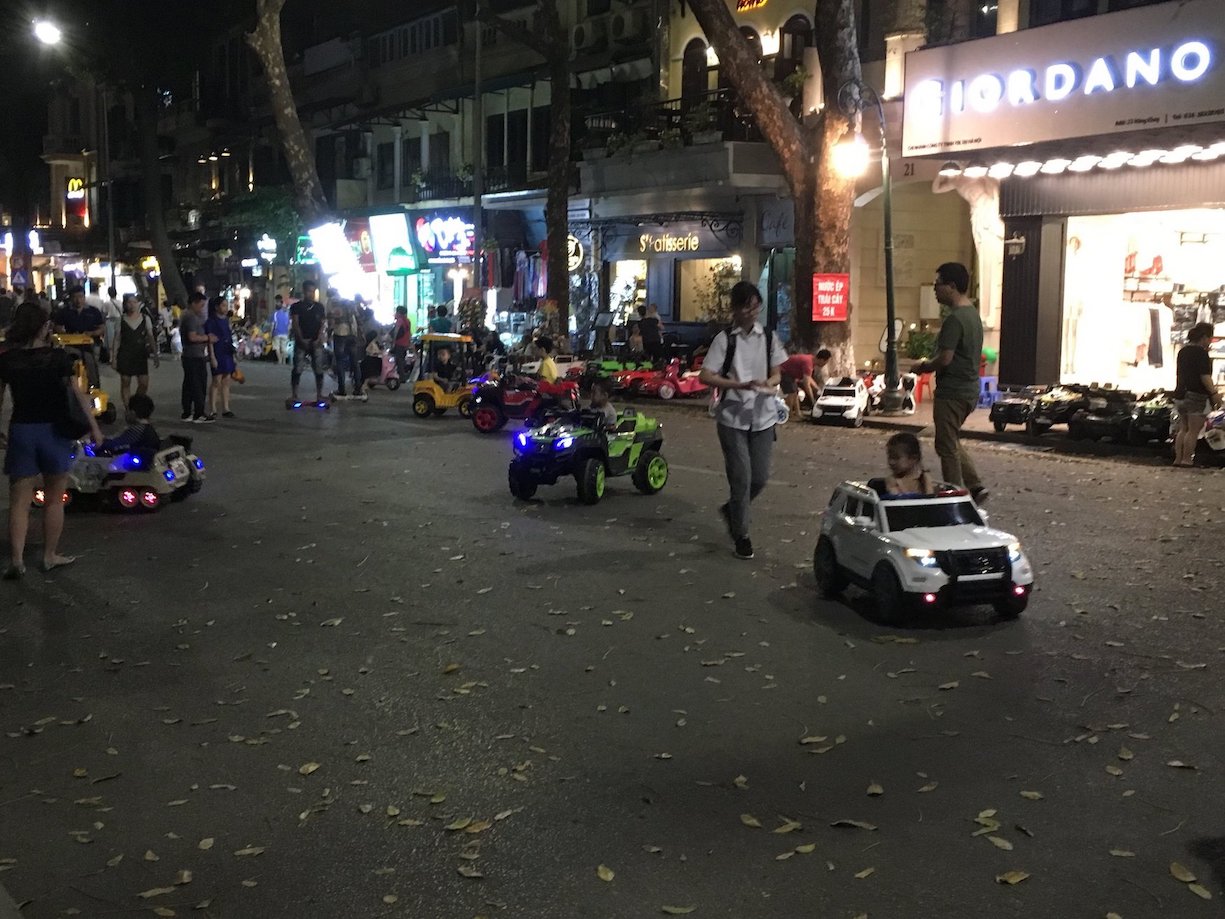 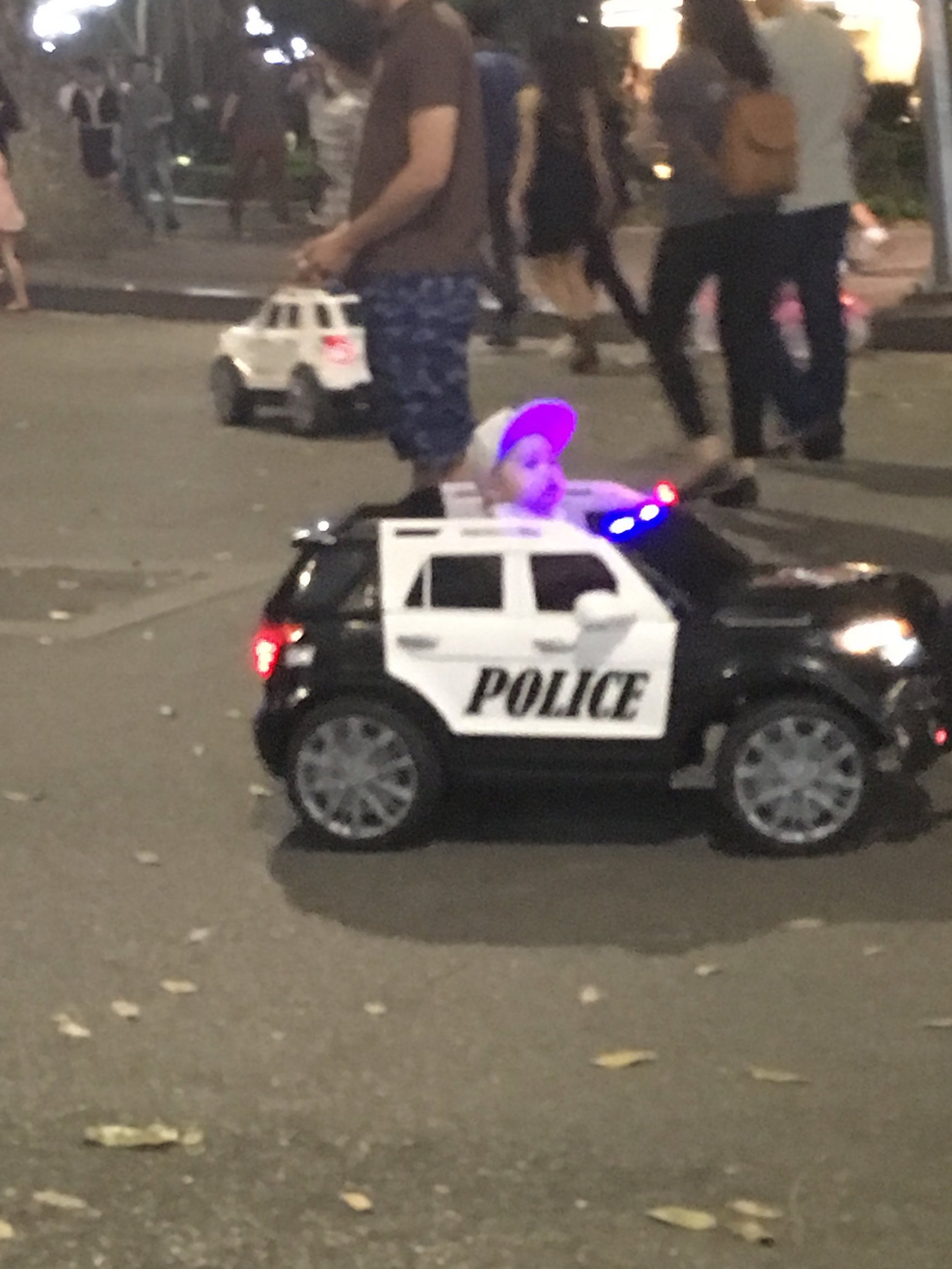 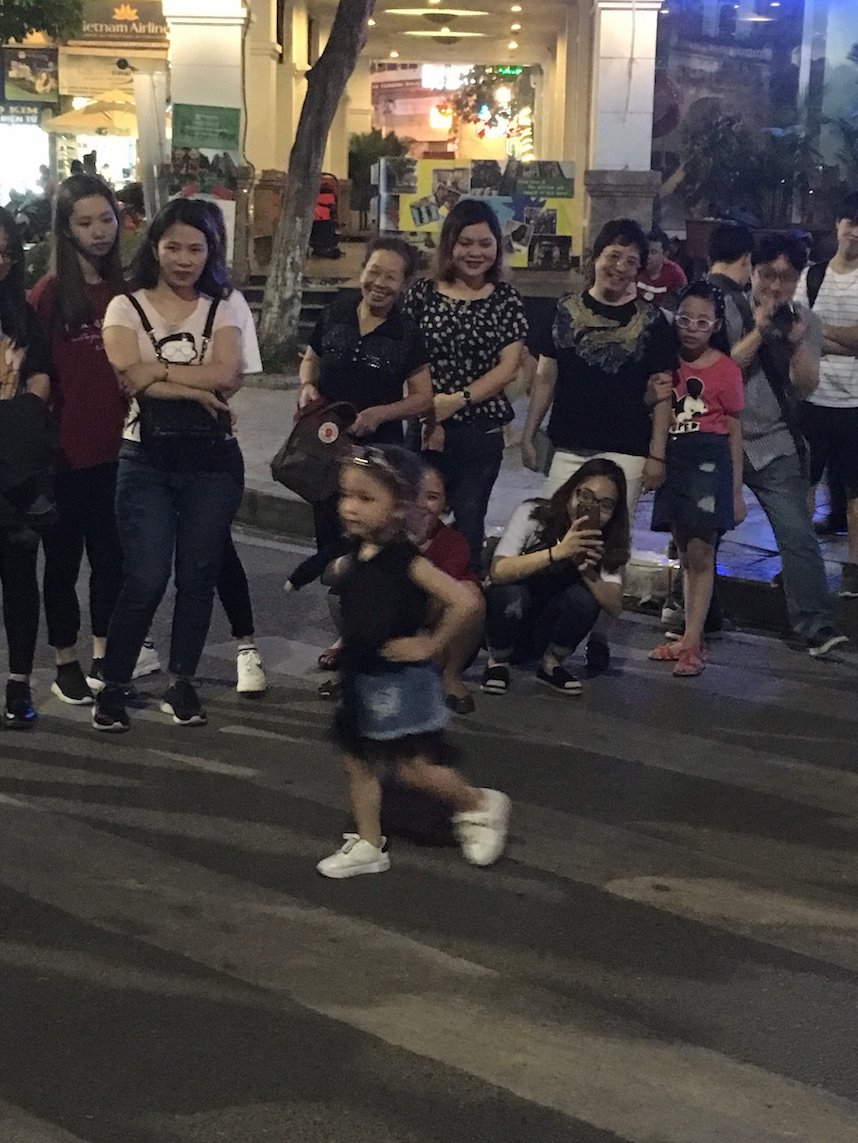 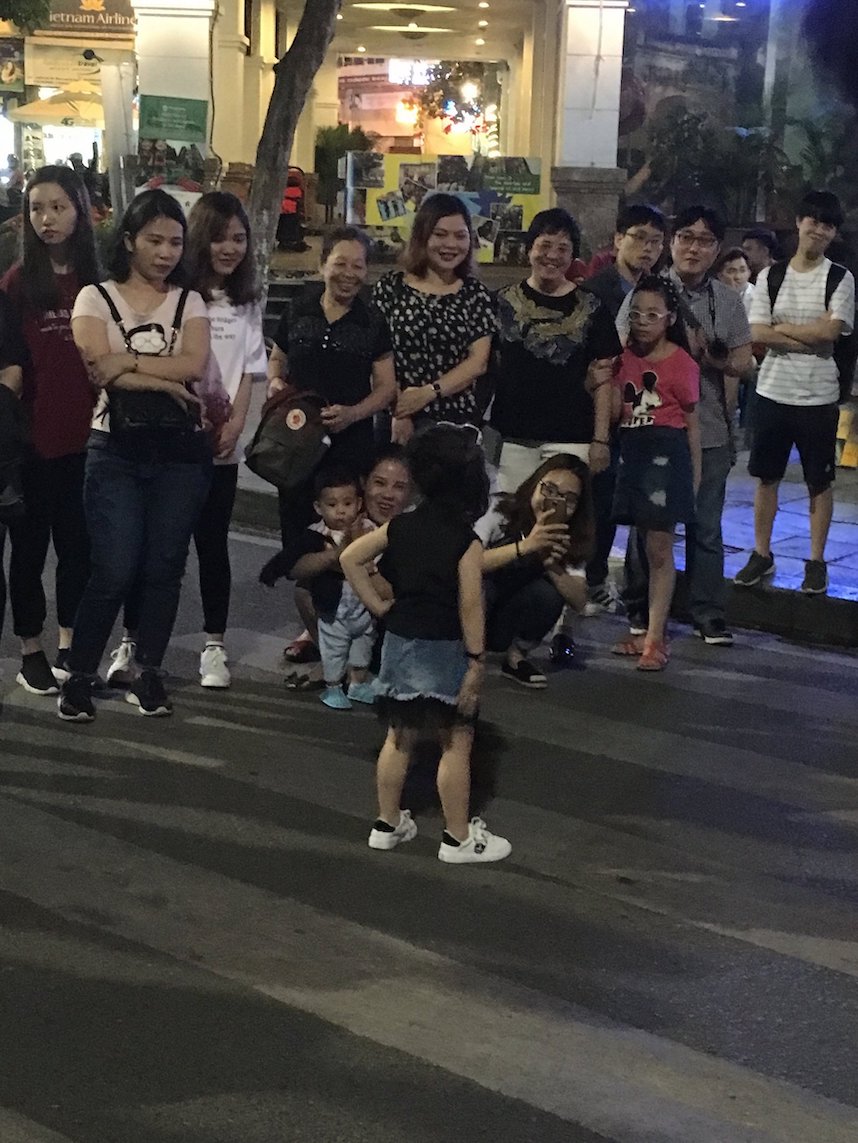 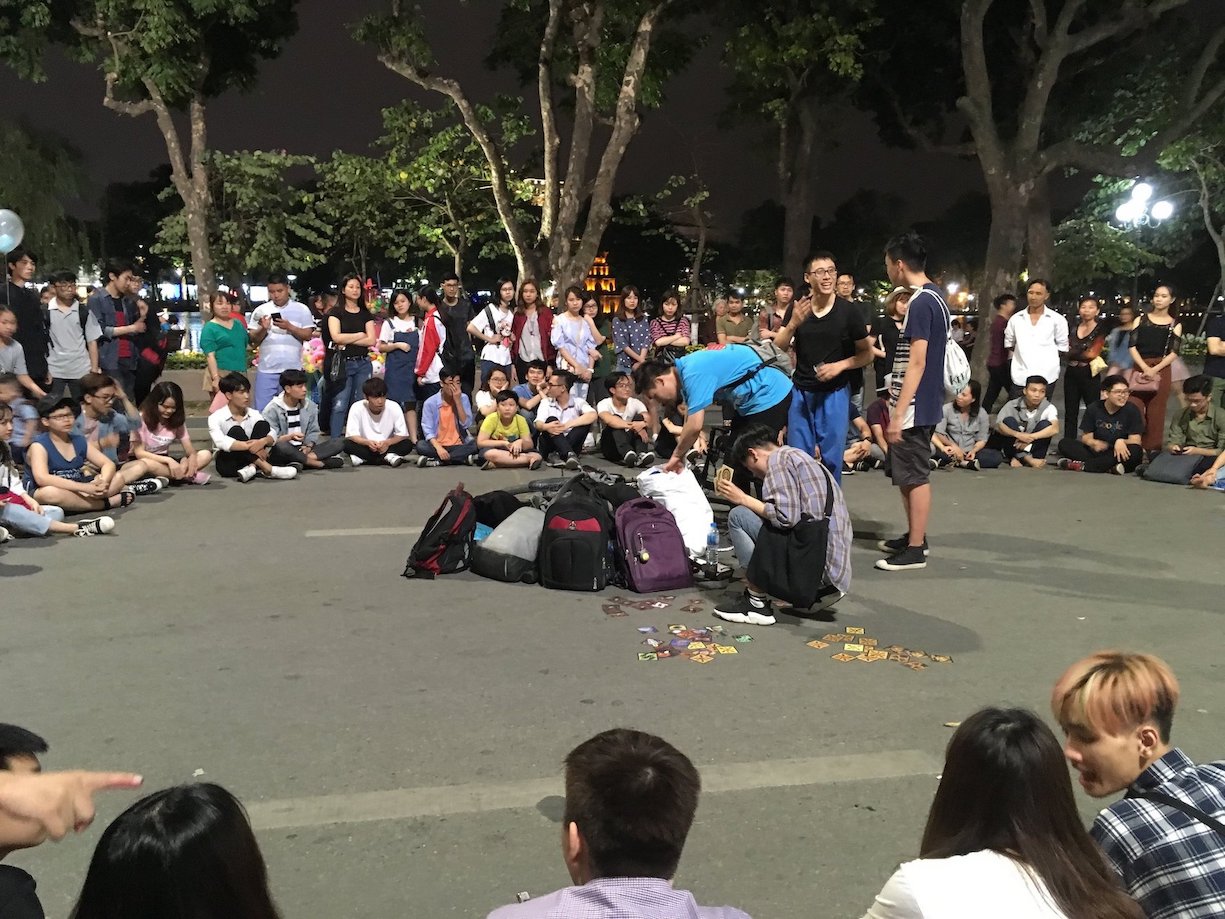 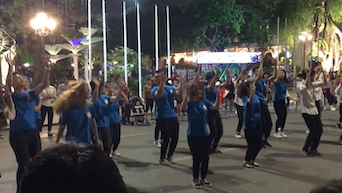 This was our first introduction to real Vietnamese cuisine. I found that the food in Vietnam varied in quality quite a bit - unlike in China, where our go-to stir fried green beans or dumplings were pretty standard (and really good) anywhere. In Hanoi, some of the noodle soups were delicious, and some not so much. Here are a few of the food highlights:

Bun Cha
This was probably the best thing I ate in the entire two weeks. Bun Cha is a noodle soup with pork and vermicelli noodles. I especially liked that you got to put the noodles in yourself, since it seemed like most of the noodle soups were super noodle heavy (imagine a full plate of spaghetti in some broth). We found this restaurant through a recommendation from a couple of our good friends - Anthony Bourdain and President Obama! As you can see from the photos, this restaurant has not forgotten President Obama’s visit, and doesn’t want anyone else to forget it either. 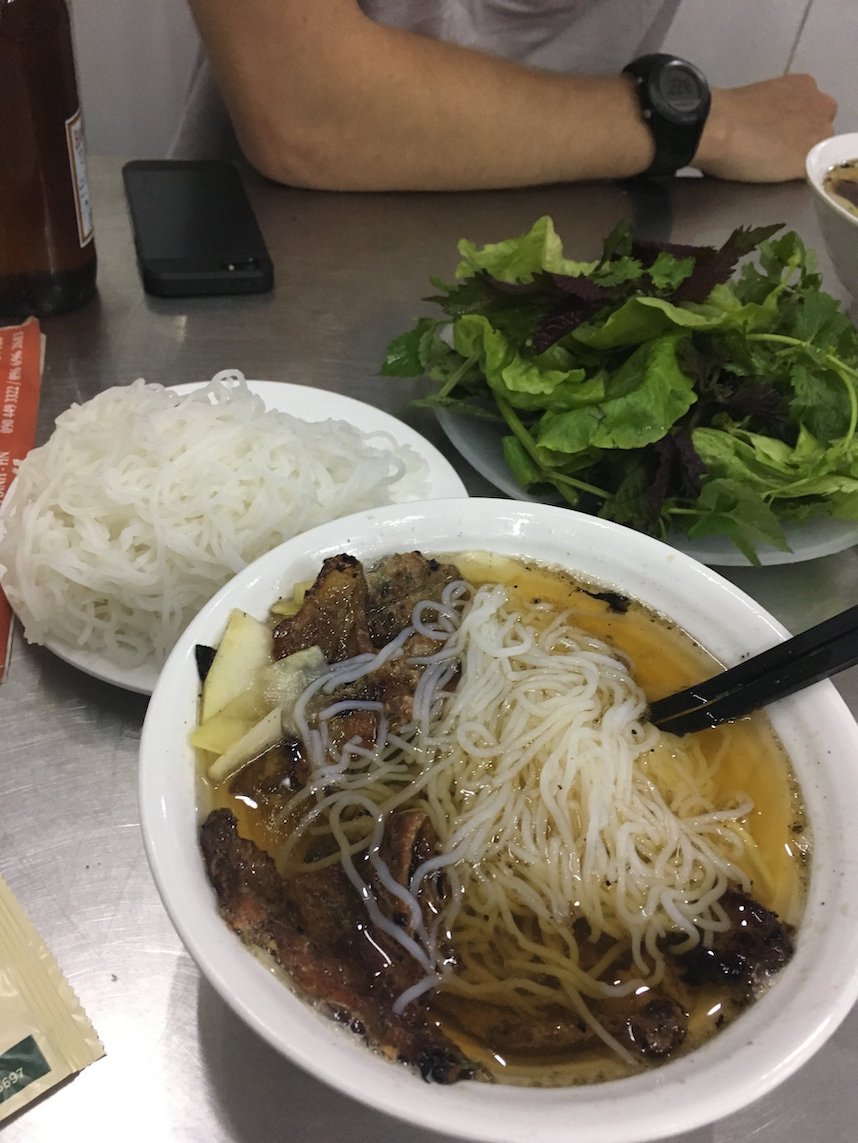 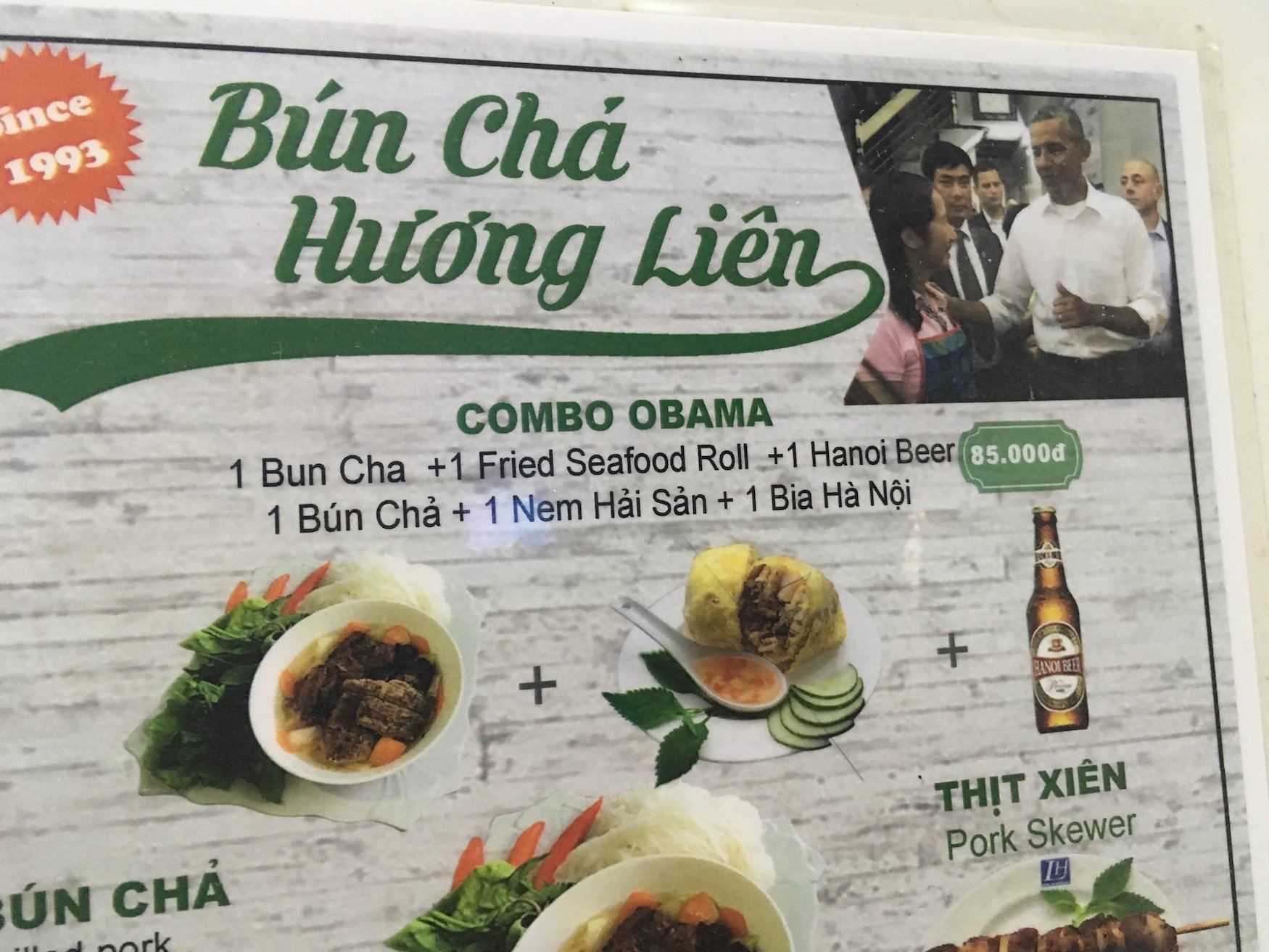 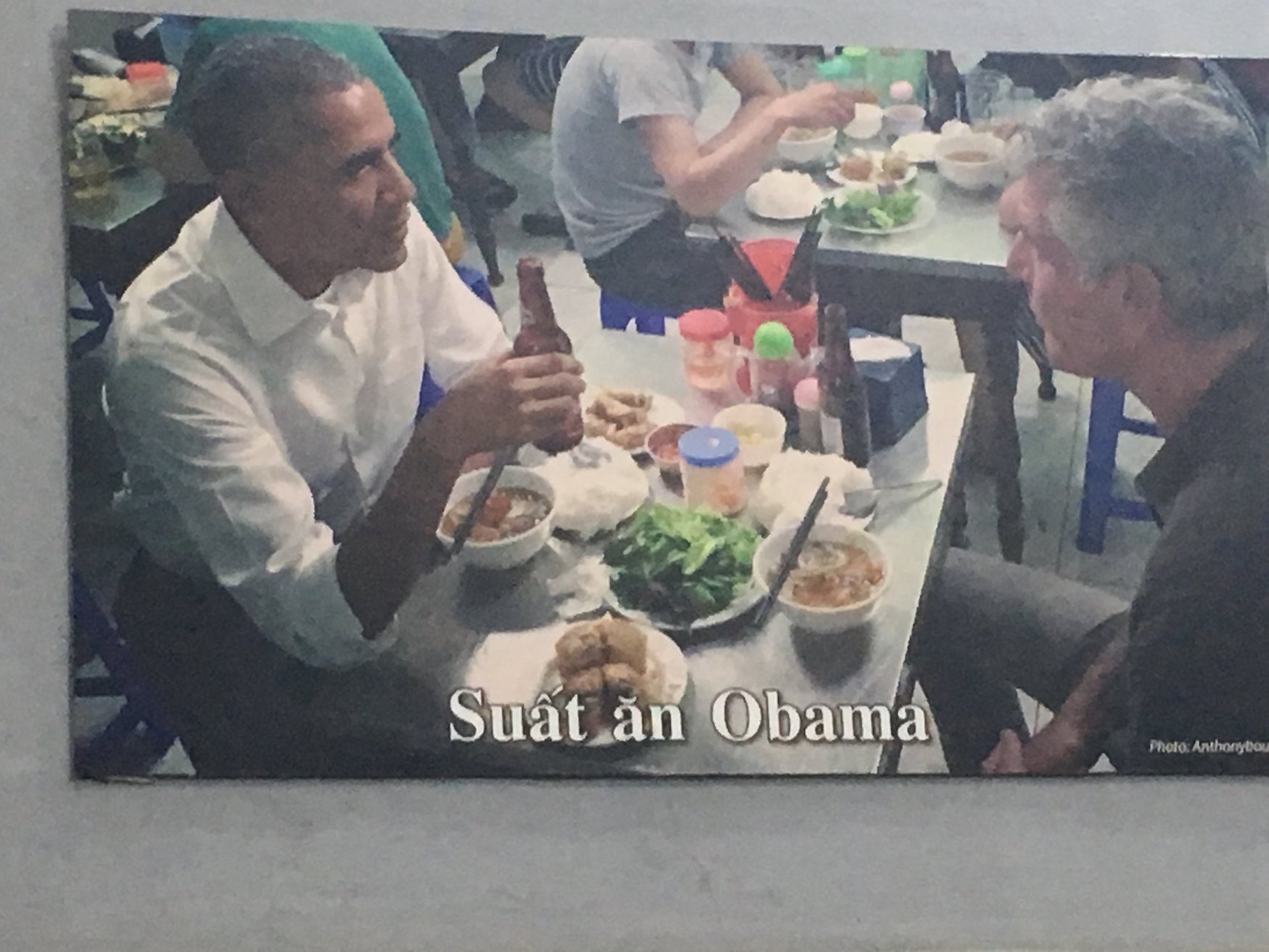 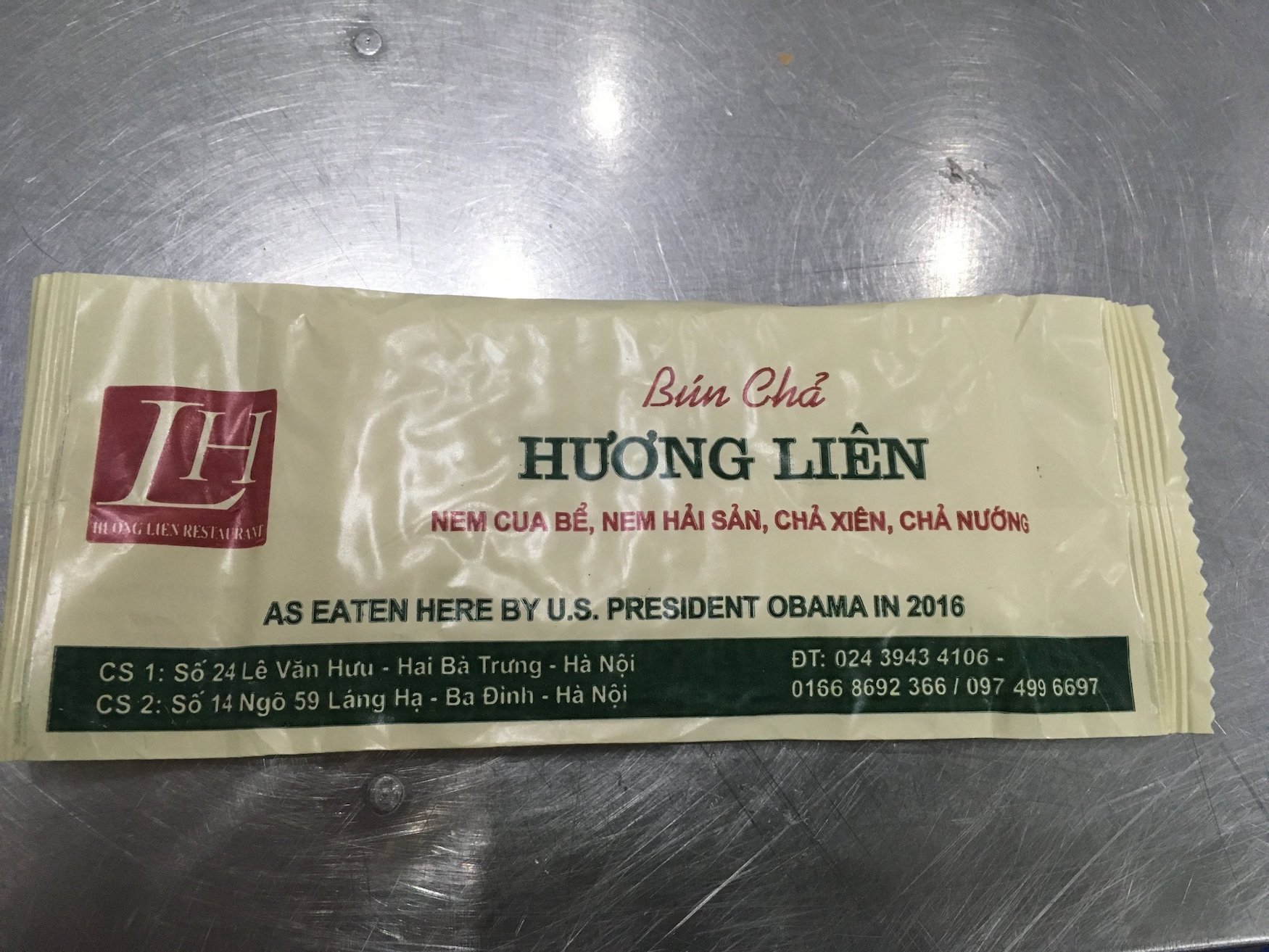 Smoothies
Southeast Asia is a land of fruits, juices, and smoothies. They’re super cheap (none of that $7+ San Francisco juice business) and really delicious. We tried passion fruit, watermelon, strawberry, lemon (and maybe others?) So good. It also helped us get over our fear of eating from street vendors.

PS - We managed to find a friend in Hanoi! Hi Nate! 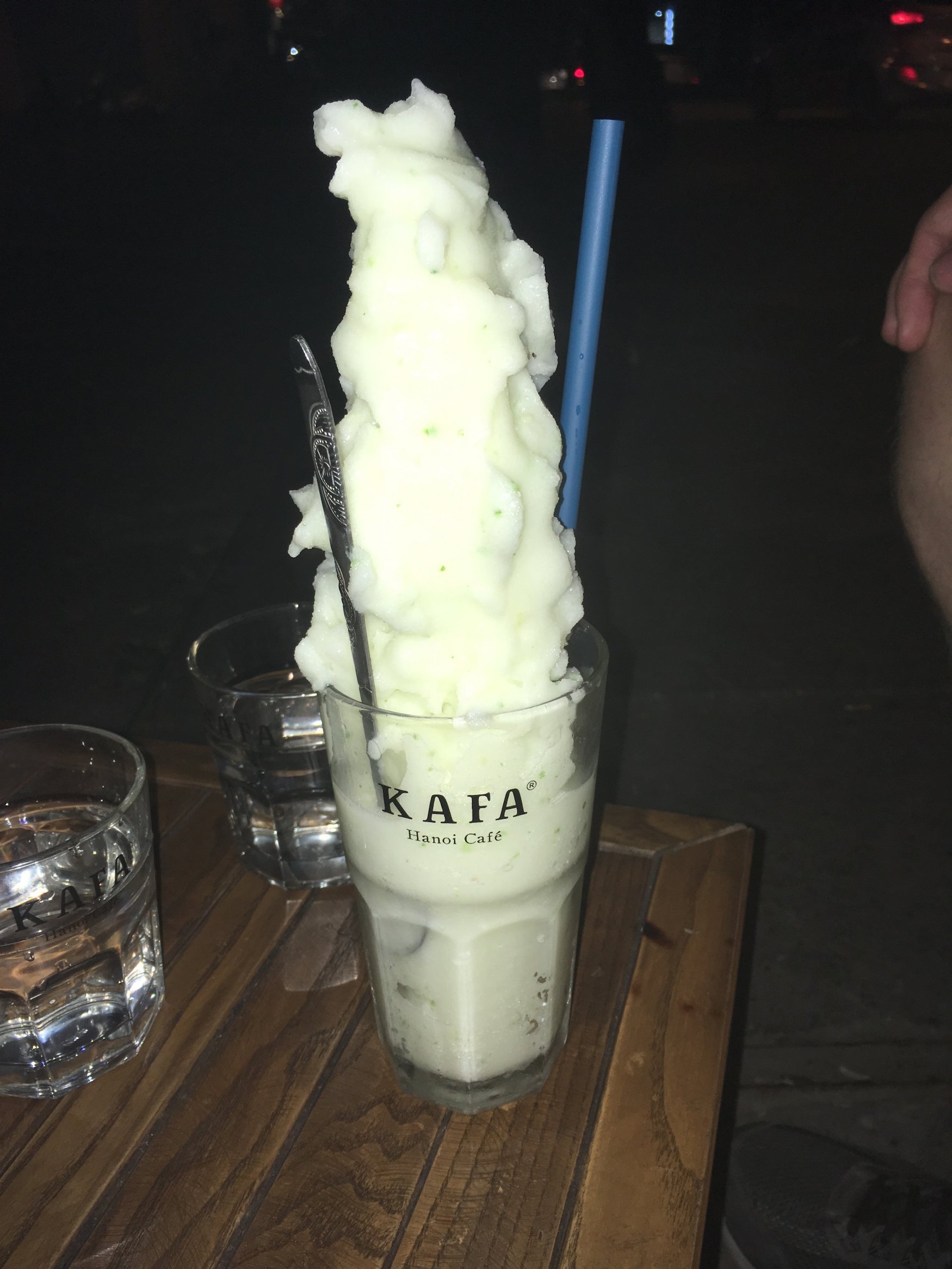 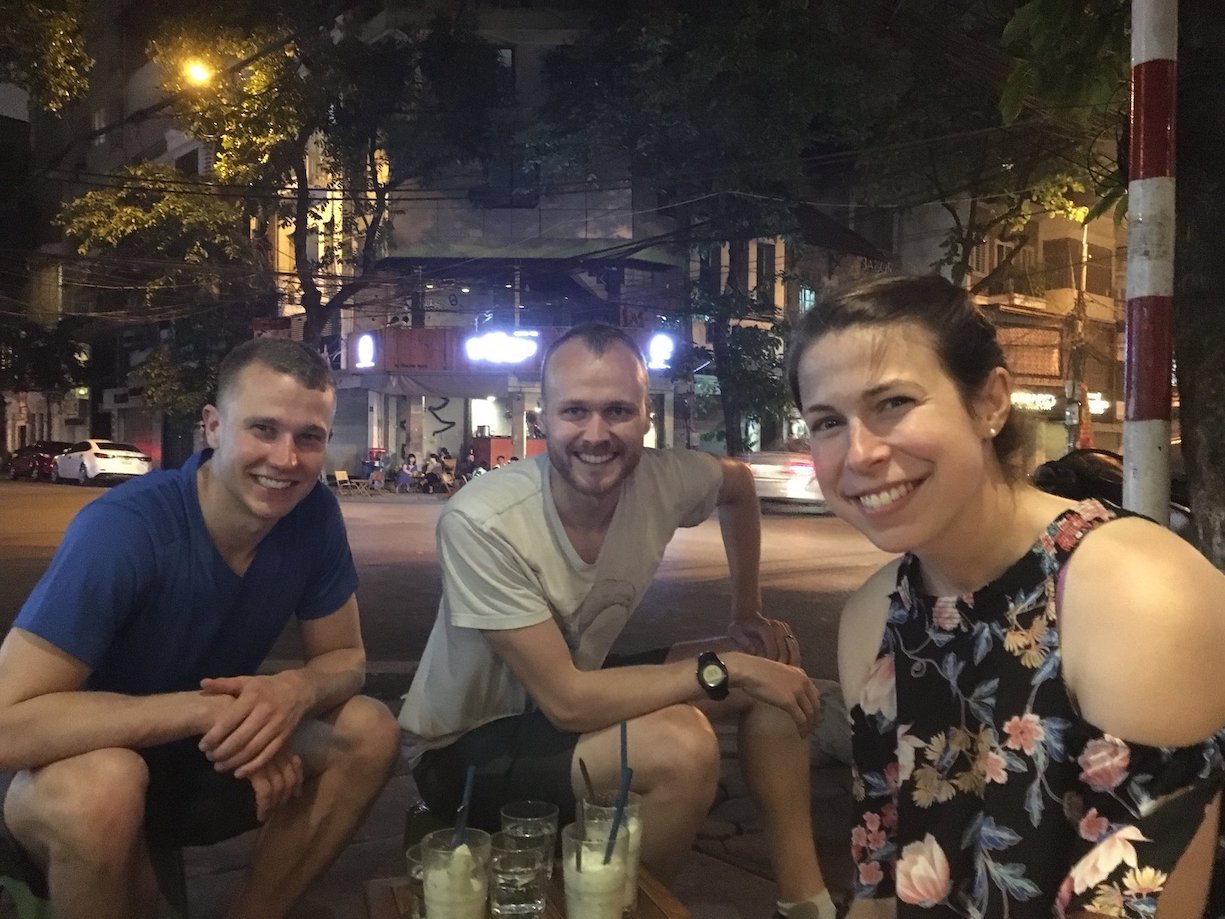 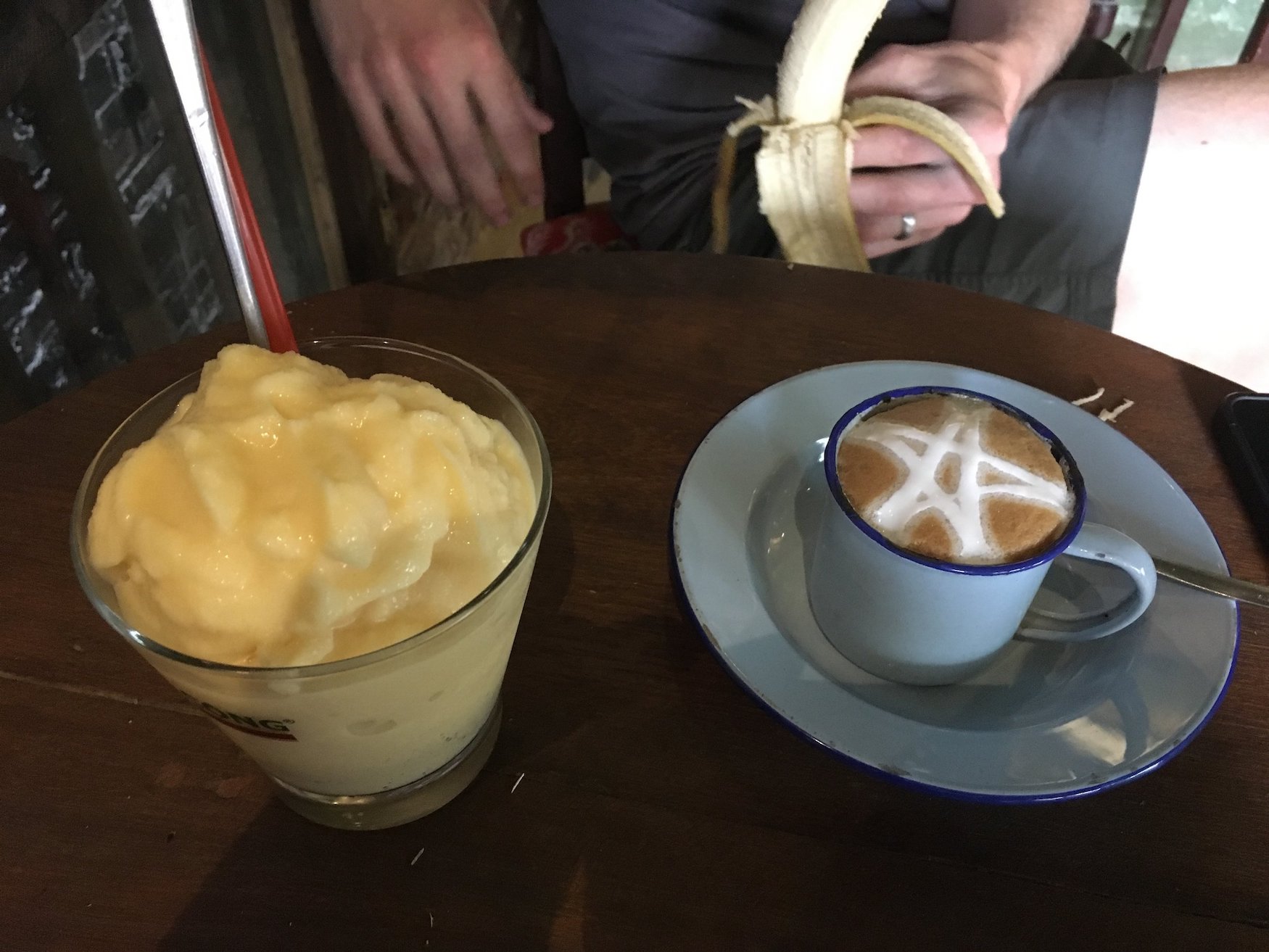 Vegan Cuisine
This is a two-parter. On one hand, we went to the most delicious vegan restaurant I’ve ever been to (thanks for the recommendation, John and Rachel!) and on the other hand, we went to a “vegan” restaurant that had a section fully devoted to fried meats. At the latter, we ordered the rice special of the day, and it definitely came with some kind of unidentifiable meat. Just like the food in Vietnam itself, some good, some not so good.

Coffee ( by Sid) :  In Vietnam, coffee is available everywhere and is typically made using a three-part filter assembly designed to brew a single cup. The cup is served when the brewing process is still happening, so you have to wait a few minutes before taking taking the filter off to begin drinking. Overall I am a fan of coffee brewed in this way, but you don’t get very much per brew.

The Vietnamese are also known to do things to their coffee such as sweeten it with a heavy pour of condensed milk in the bottom of the cup (delicious, but almost too sweet!) or even beating egg yolks into the coffee and topping it a custard-like egg cream (too thick!) 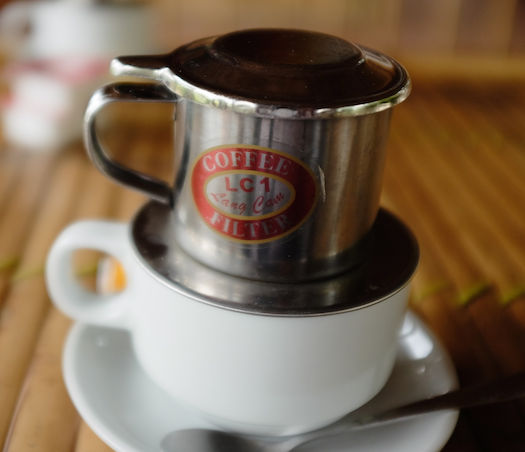 More coming soon on our Vietnam adventures to Sapa, Ninh Binh, and Hoi An!

PS - a shout out to the many friends that gave us recommendations! Thanks to John/Rachel, Sam/Lily, Tiziana, Jenny, Shivani, and Vina!