During our two weeks in China, we tried to eat a lot of the typical Chinese cuisine - dumplings, noodles, stir fried veggies, etc. Most of what we ate was delicious! Some of it wasn’t so good, and some things were really out of the ordinary. I’ll start with the good…

Vegetables
I’m a big fan of stir fried and roasted veggies, so we took advantage of the fact that these types of dishes are prominently featured on most traditional Chinese menus. We ate lots of stir fried green beans and cauliflower, even if the cauliflower was soaked in oil from time to time… 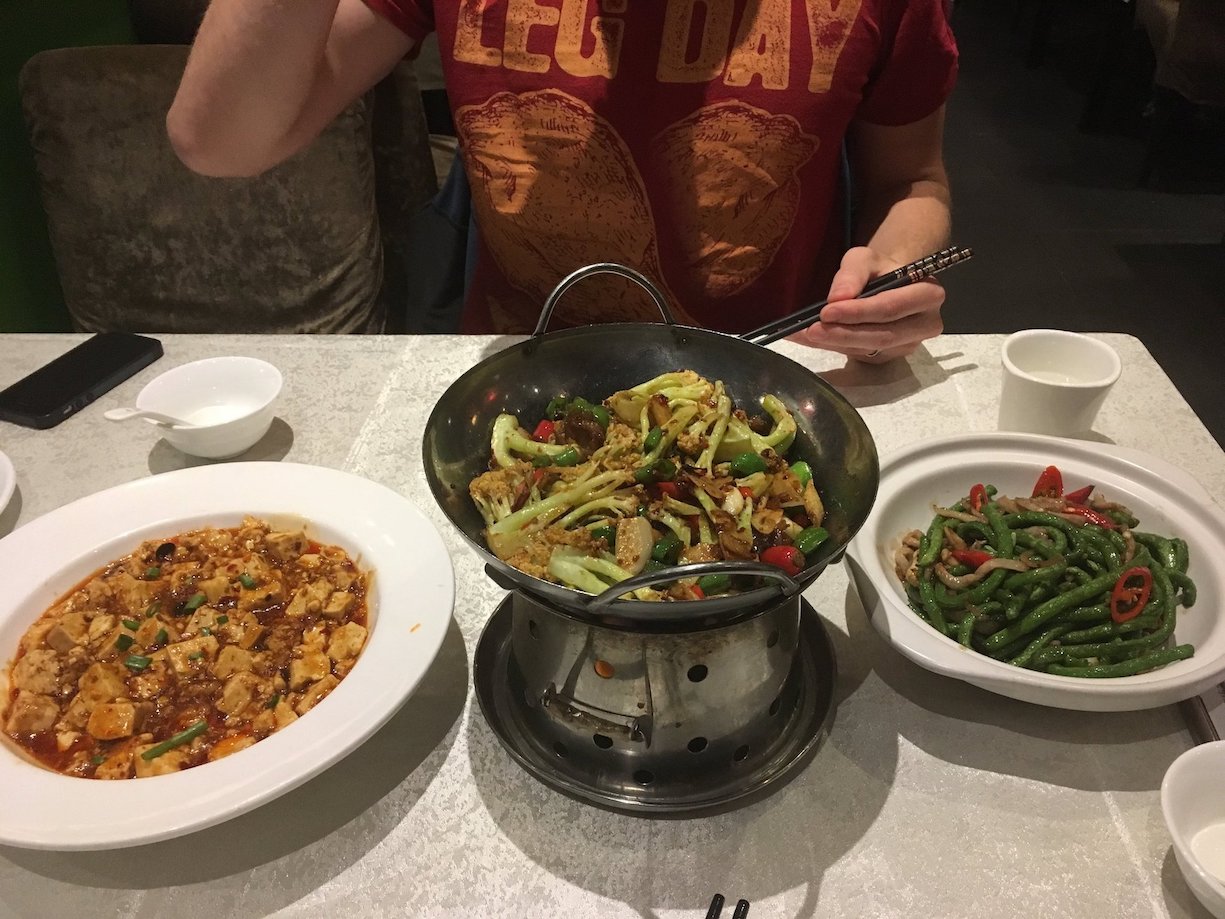 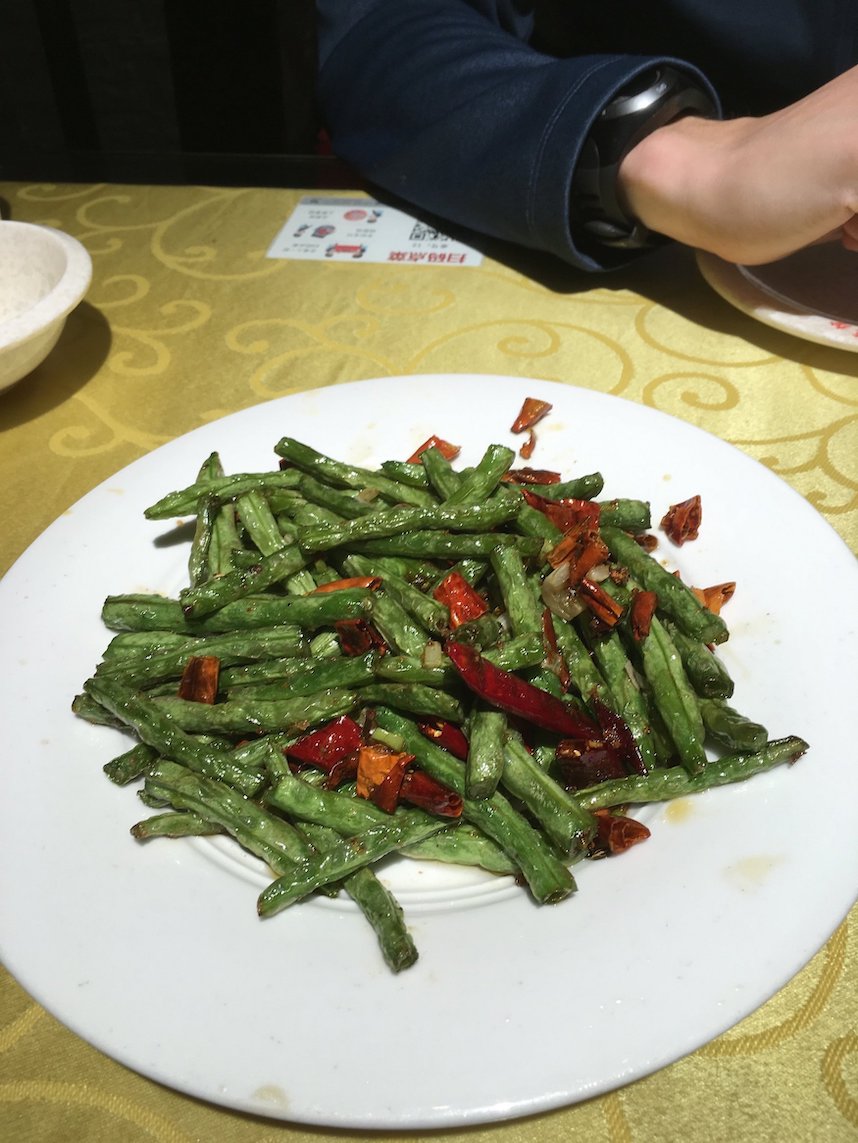 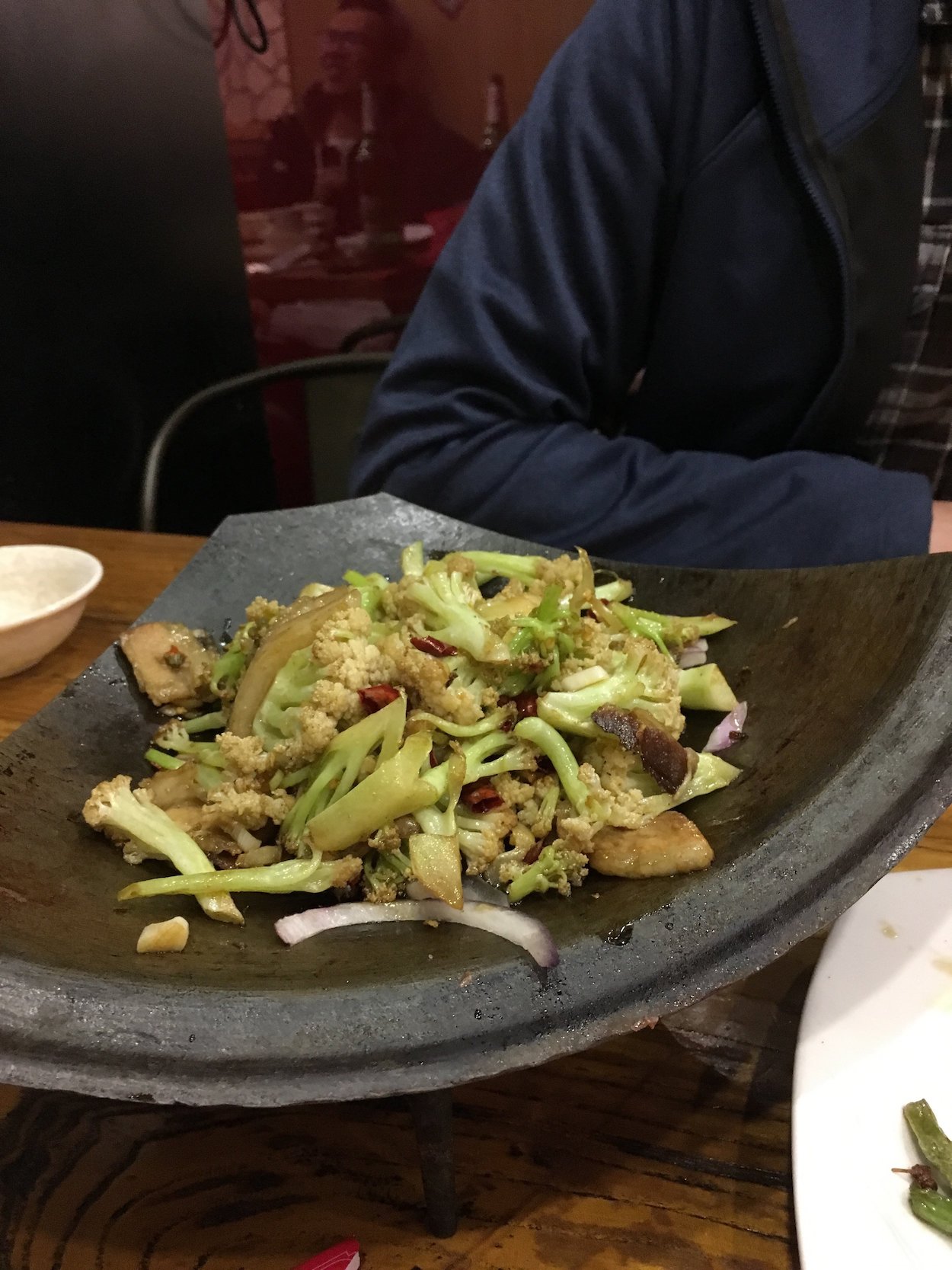 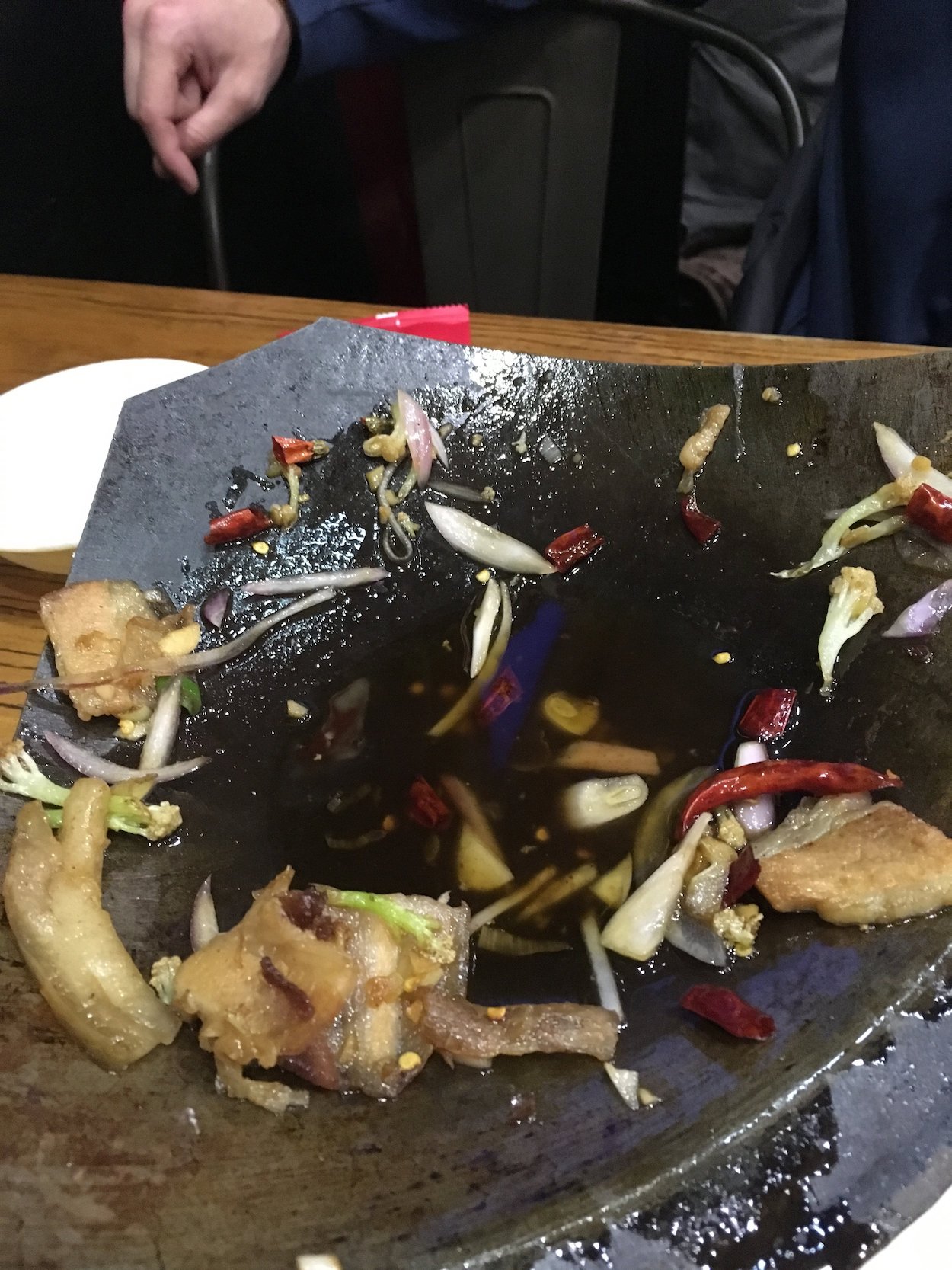 Dumplings
Can’t really go wrong with dumplings. And on top of their deliciousness, they are SUPER cheap. At a few restaurants, we got something like 18-20 dumplings for $3 USD. At home, we usually just eat dumplings with soy sauce, but in China they were usually served with a mix of soy sauce and vinegar. Either way, they were fast and tasty. 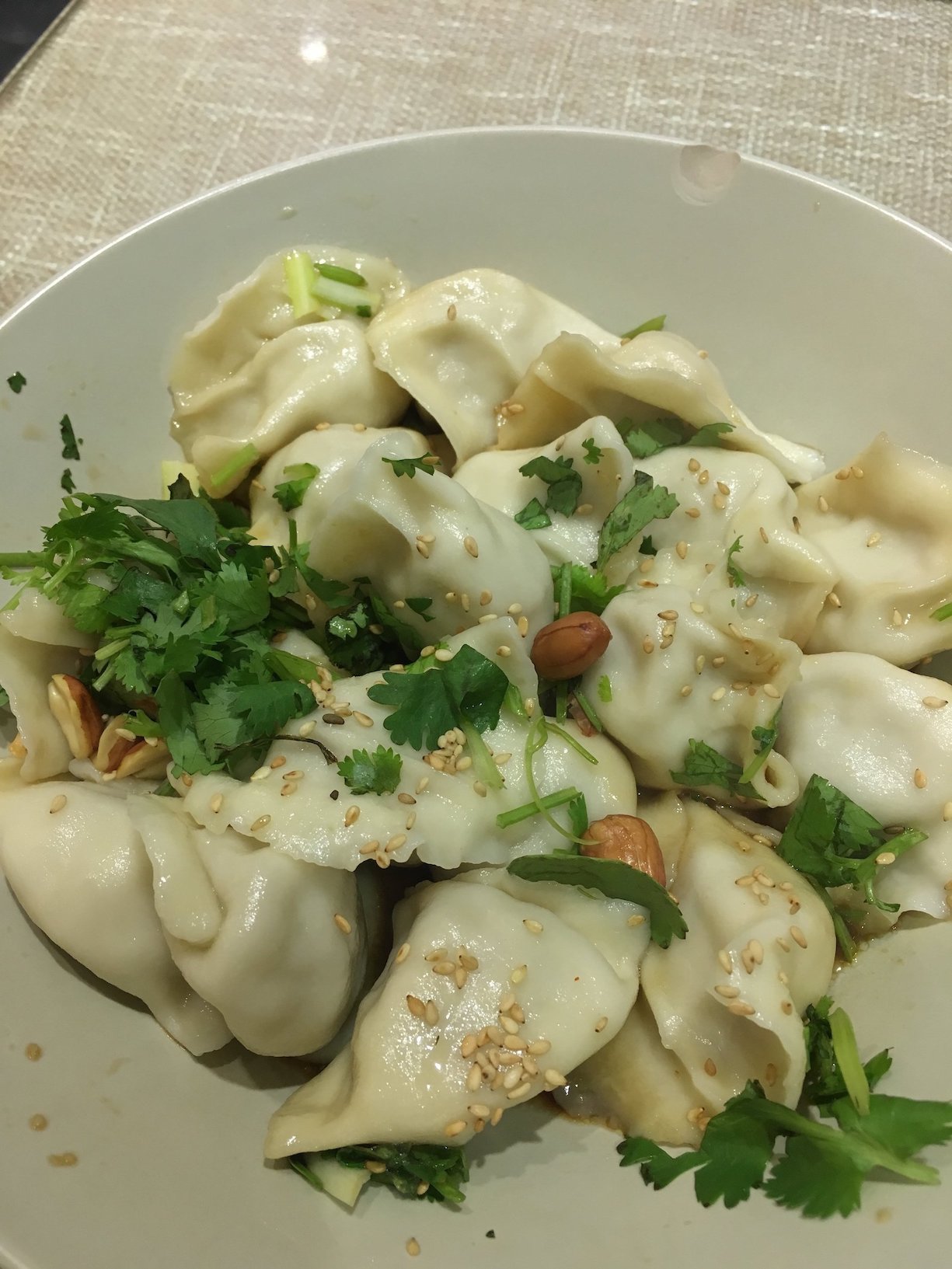 Street Food
We didn’t eat a ton of street food, since vendor cleanliness is sometimes questionable (for example, when we bought fruit from a street market, we would wash it with bottled water before eating) and lots of the street food is just straight up meat on a stick. But one morning we were wandering around Shanghai and I was starting to get a little hangry, so we needed to get breakfast ASAP (Sid doesn’t really get hangry. This is probably surprising to no one.) There were a bunch of people at a street vendor getting breakfast wraps, so we got in line. I tried to communicate that I wanted exactly what the girl in front of me got, but somewhere lost in communication, we got a couple of variations on the breakfast sandwiches - one with bacon (sort of) and one with chicken. Sid wasn’t a huge fan because they put both ketchup and mayo on them, but I thought they were super tasty. 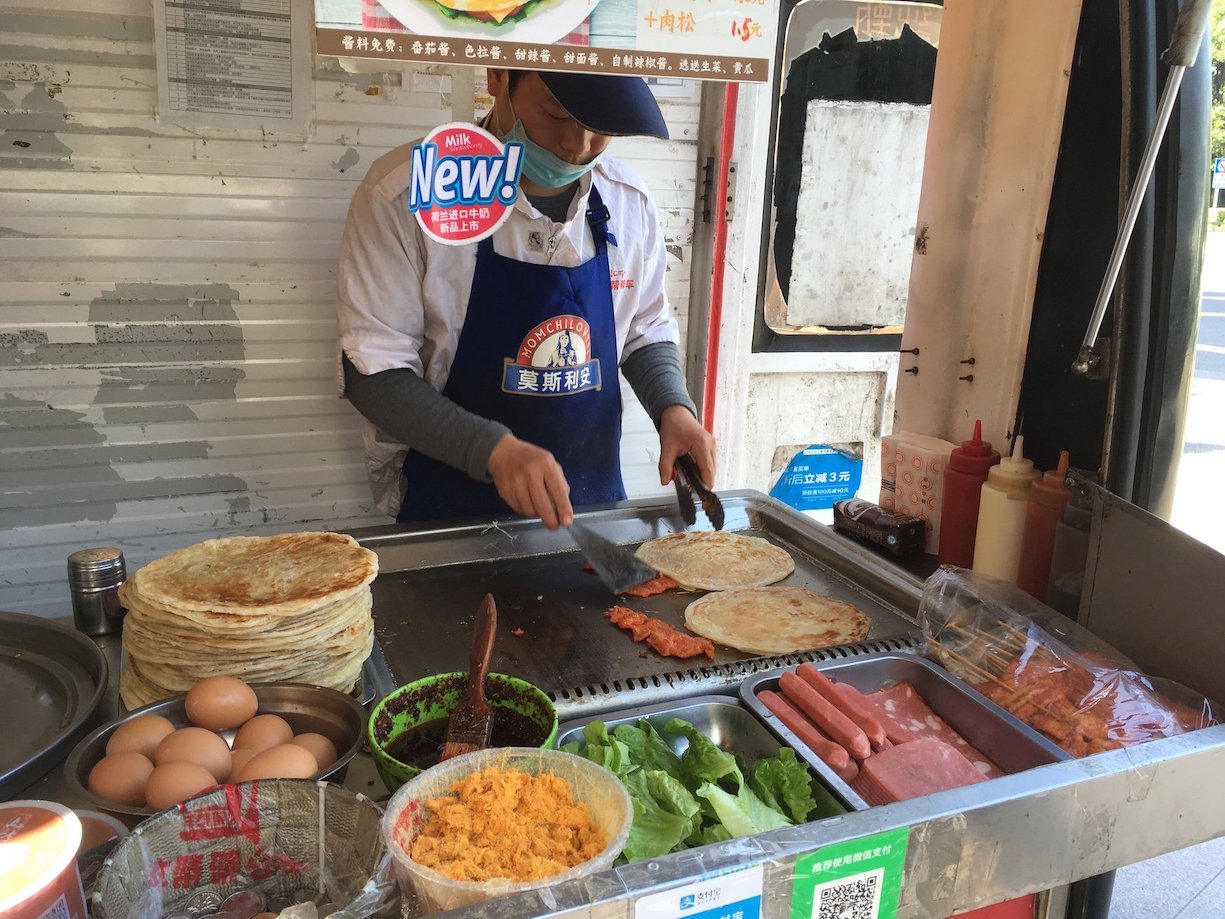 Michelin Star Pork Buns
We actually ate these in Hong Kong, not China, at a restaurant called Tim Ho Wan. There are about a dozen of these restaurants in the city, but only a couple have been awarded Michelin stars. Lucky for us, one of the recognized venues was only about three blocks away from our Airbnb. Tim Ho’s is known for two things: 1) being the most inexpensive restaurant to earn a Michelin star and 2) baked pork buns. For both of these reasons, we went for a dim sum brunch one morning in Hong Kong. The pork buns were amazing - I’m a fan of all types of buns, dumplings, etc. but these ones were the best I’ve had. We ordered the pork buns along with a slew of other items (dumplings, beef balls, etc.) but we really should have just gotten 5 orders of pork buns.

Treats
There was no shortage of treats in China and Hong Kong. We tried a few of the local treats (like the knock off oreos pictured below - a whole sleeve was only $0.25 USD!) and then had some familiar treats like McDonald’s ice cream and fro-yo with toppings (similar to red mango, berryline, etc.). It seemed like there were Haagen Dazs  in every building, but ice cream in general - both at spots like Haagen Daz and the grocery store - was relatively expensive. The only place it wasn’t expensive was at good ole Mickey D’s, and wherever there was a McDonald’s, you would see lots of people walking around with ice cream cones (including me). 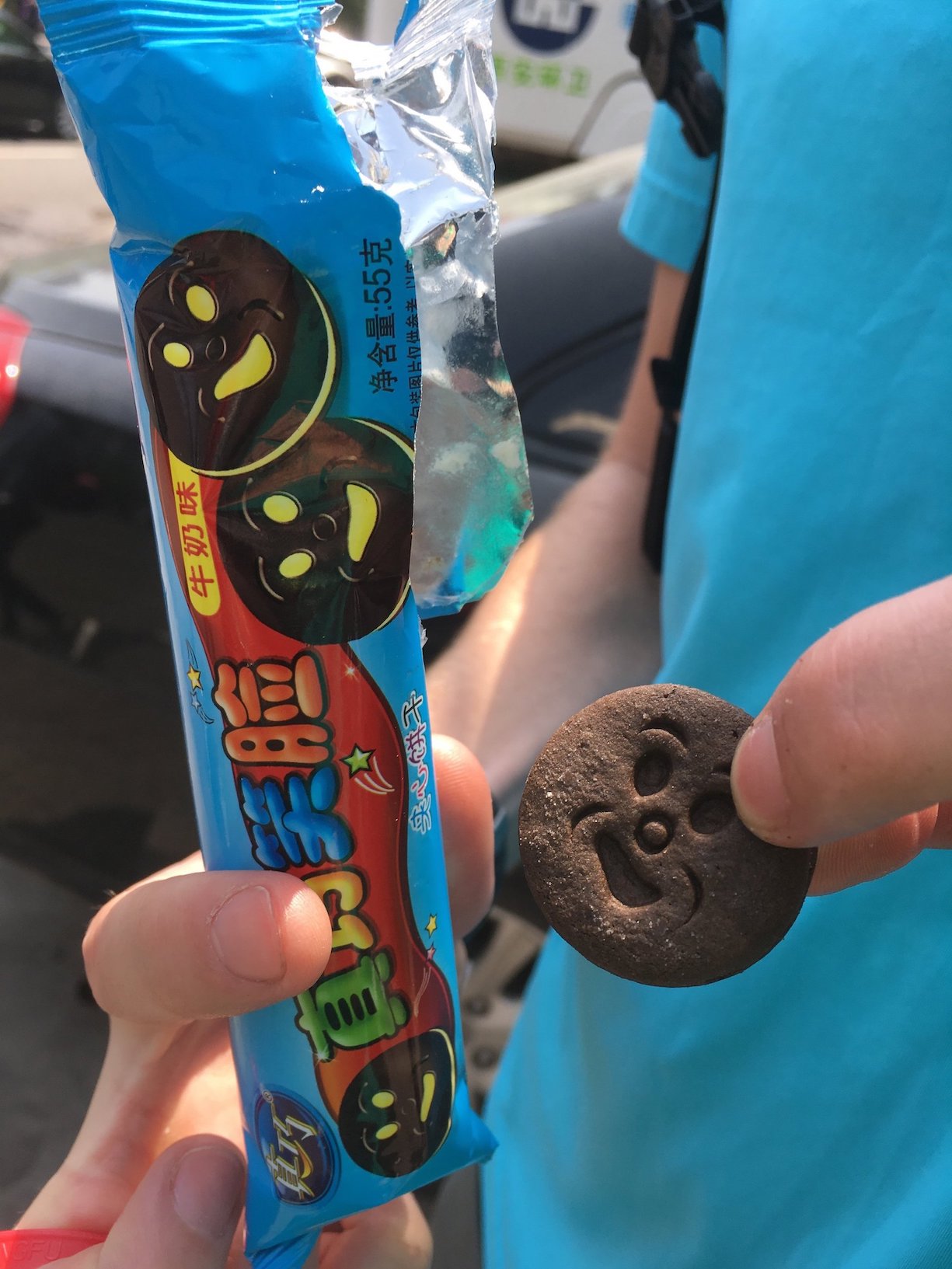 Hot Pot: We spent a couple of days in Chengdu, a city known for hot pot and particularly spicy szechuan food. I should preface the hot pot anecdote with the fact that every time we ordered anything slightly spicy in China, they would ask, “spicy ok? can you eat?” At one restaurant, three separate waiters/hosts came up to our table and asked a variation of this question after seeing our order. To be fair, I spent that particular meal in tears, so maybe it was warranted. Anyways, when we went to hot pot, it was no different, except this time I attempted to order the least spicy broth. It was successful, and we got a delicious tomato broth that I could handle. Unfortunately, we couldn’t discern what most of the meats were, so to play it safe, we only got the one that we were sure was beef and then ordered a bunch of vegetables. Really good, but I still prefer dumplings. :) 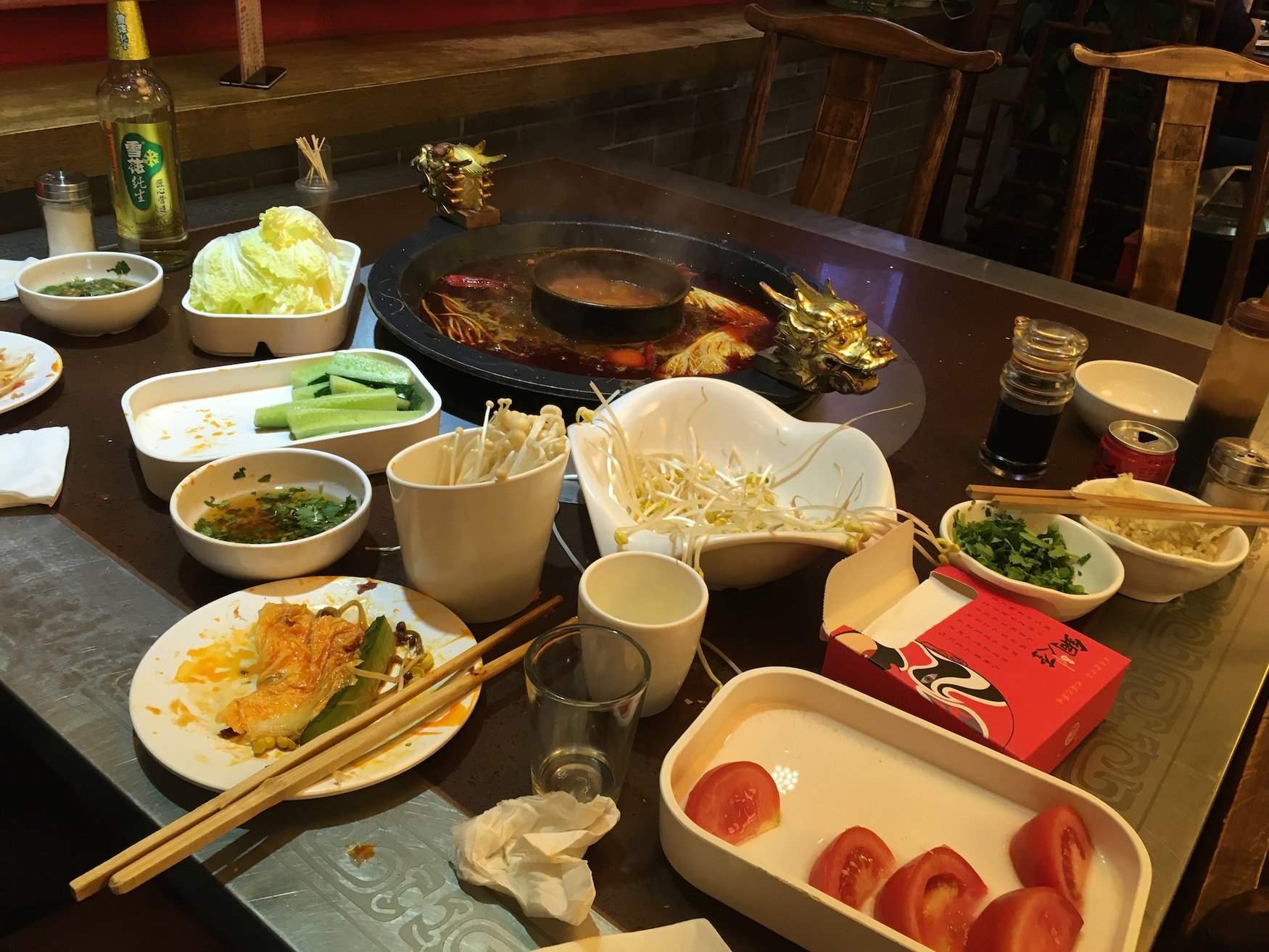 Tourist Dim Sum Buffet
We started out the trip with a few questionable food choices. During our first day in Shanghai, we came upon a dim sum-type place that was essentially a buffet of small plates. As a fan of buffets, I was excited about this place. (I am pro-buffet not for the sheer quantity of food you can consume at a buffet - though that’s a plus if you’re starving - but just because I like being able to choose the exact ratios of food that I’m eating… which are usually different than what a restaurant would choose for me. Example A: ratio of froyo to sprinkles). Anyways, the dim sum buffet turned out to be a dud two mornings in a row. We should have known better, because it was in “Old Shanghai” which is a super touristy area near a few main attractions, but it just looked so good! Also, our food selection decisions didn’t help. For some reason, on day one we got a tofu sticky rice cake and some really thick beef-filled buns that were mostly just bun. The next day, we thought we were stepping it up, but ended up with an order of really hard not-so-cooked asparagus and some slightly better dumplings. 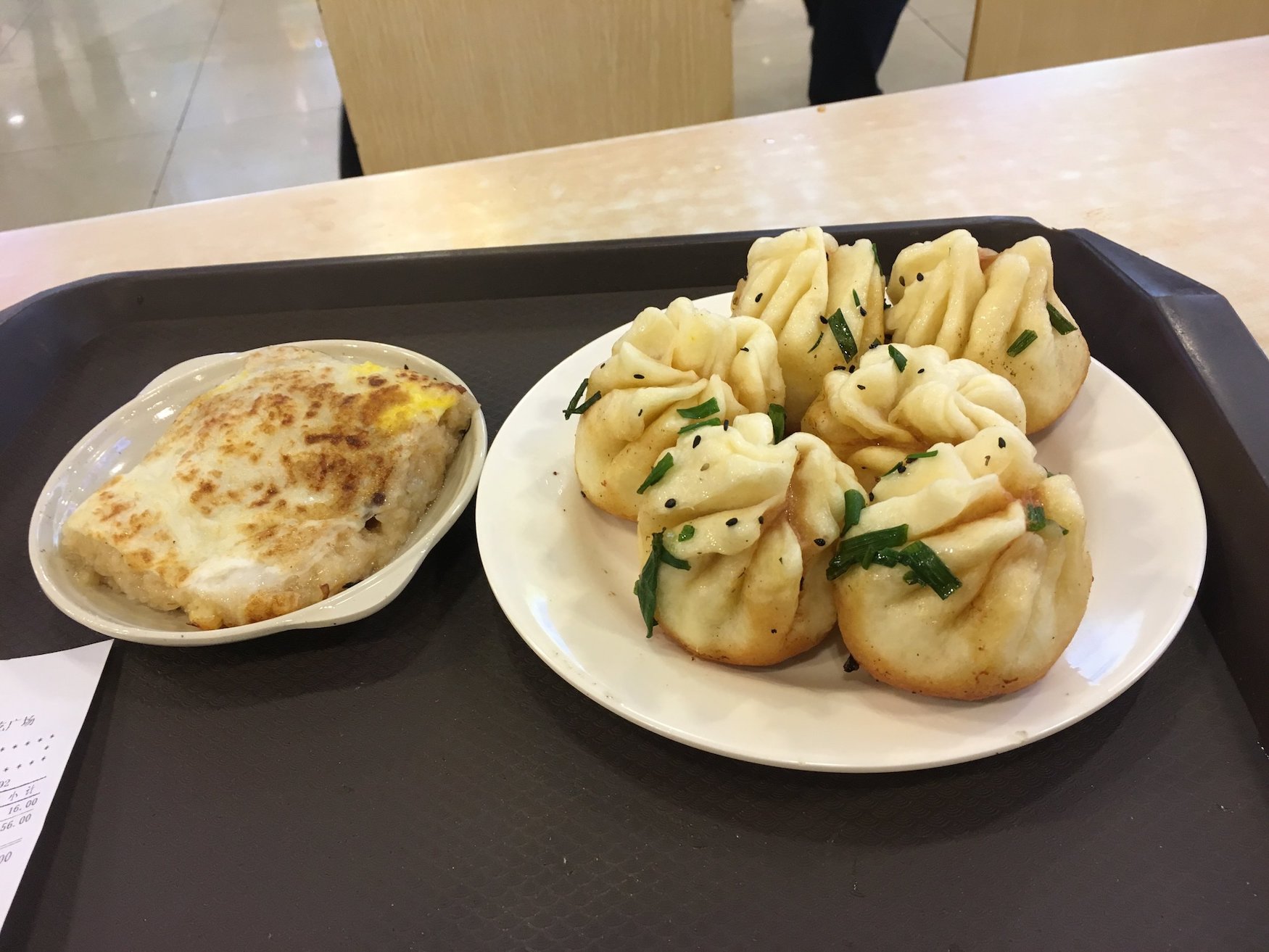 Dr. Cinnamon
One night in Shanghai we went to a speakeasy-type bar recommended by a friend. It was a super cool spot, and we got to sit at the bar and marvel at the bartenders’ fancy drink-making abilities, but again, my ordering skills got the best of me (it didn’t help that the translations of the drinks weren’t totally accurate). I ordered an innocent-sounding drink called “Dr. Cinnamon” - it was supposed to have spiced rum, apple juice, cinnamon, etc. Little did I know that it also came with a 4” high meringue topping that they literally gave you a spoon to eat. Sid got a straw with his drink and I got a spoon. I think the fact that you were required to eat through such a large quantity of the topping in order to get to the drink would be off-putting to most people, but I also really dislike whipped cream and things like meringue. Sid ate some of the meringue and then I stole one of his straws to avoid the rest of it. 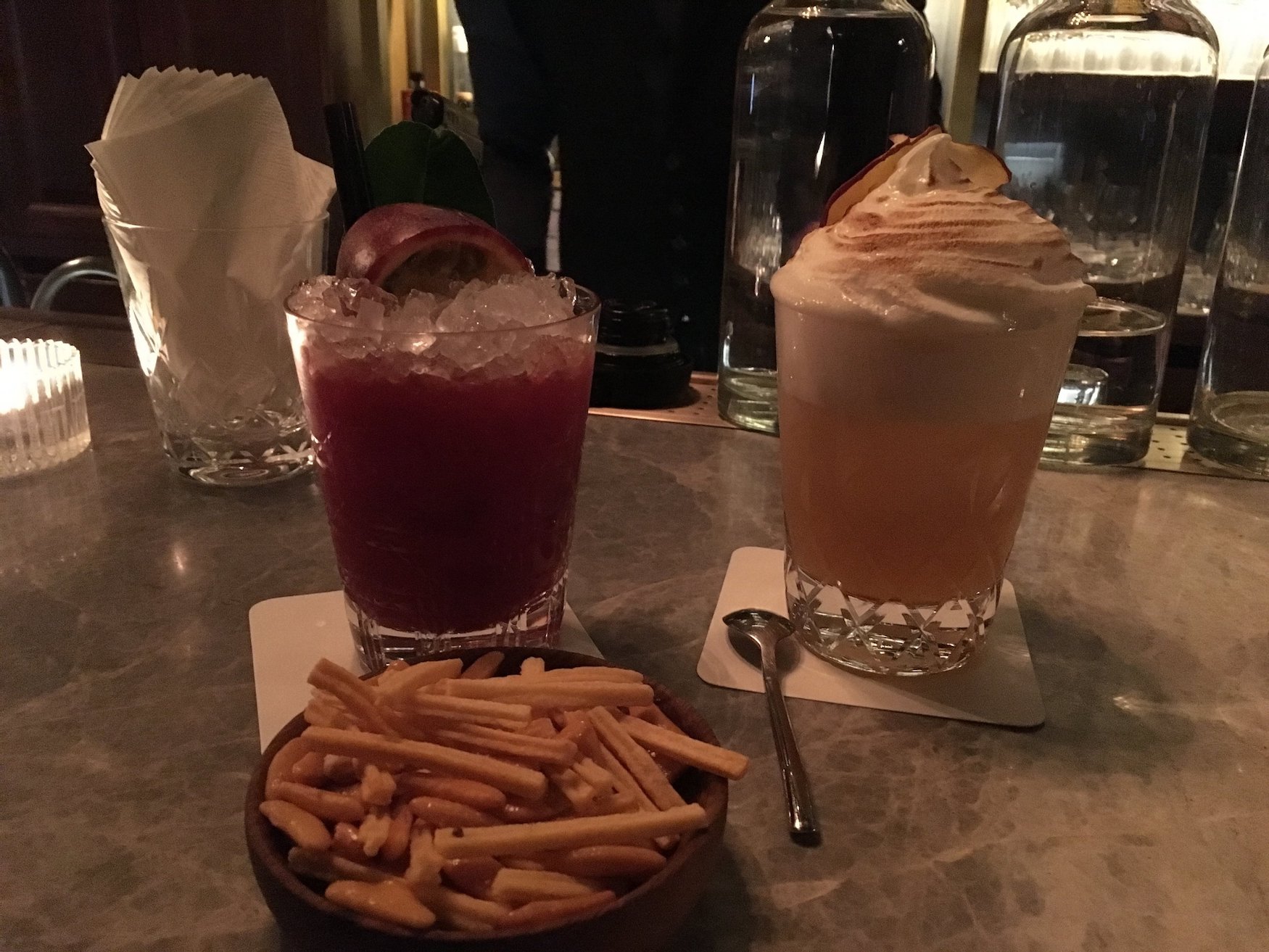 I trip to a foreign country wouldn’t be complete without some never-before-seen food items, and China was no different.

Meat everywhere
China has a reputation for being unfriendly to vegetarians for a reason. First, there’s literally meat everywhere on the streets - sometimes hanging from racks, other times behind glass showcasing the items for purchase. In just about every veggie dish we had at a restaurant there was some meat hiding in there somewhere. Not a big problem for Sid and I, but I can see where it would be tough for someone who’d rather not have hidden pork with their green beans. Not only do most restaurant dishes have meat, but lot of the chip/cracker flavors are meat-based too. We got a bag of what I thought were goldfish, but instead of being cheese flavored, they had a pretty hefty meat flavor. Lots of meat flavors for the other savory snacks too. But if you want to avoid the meat flavor, you can always have the local favorite cucumber flavored Lays… 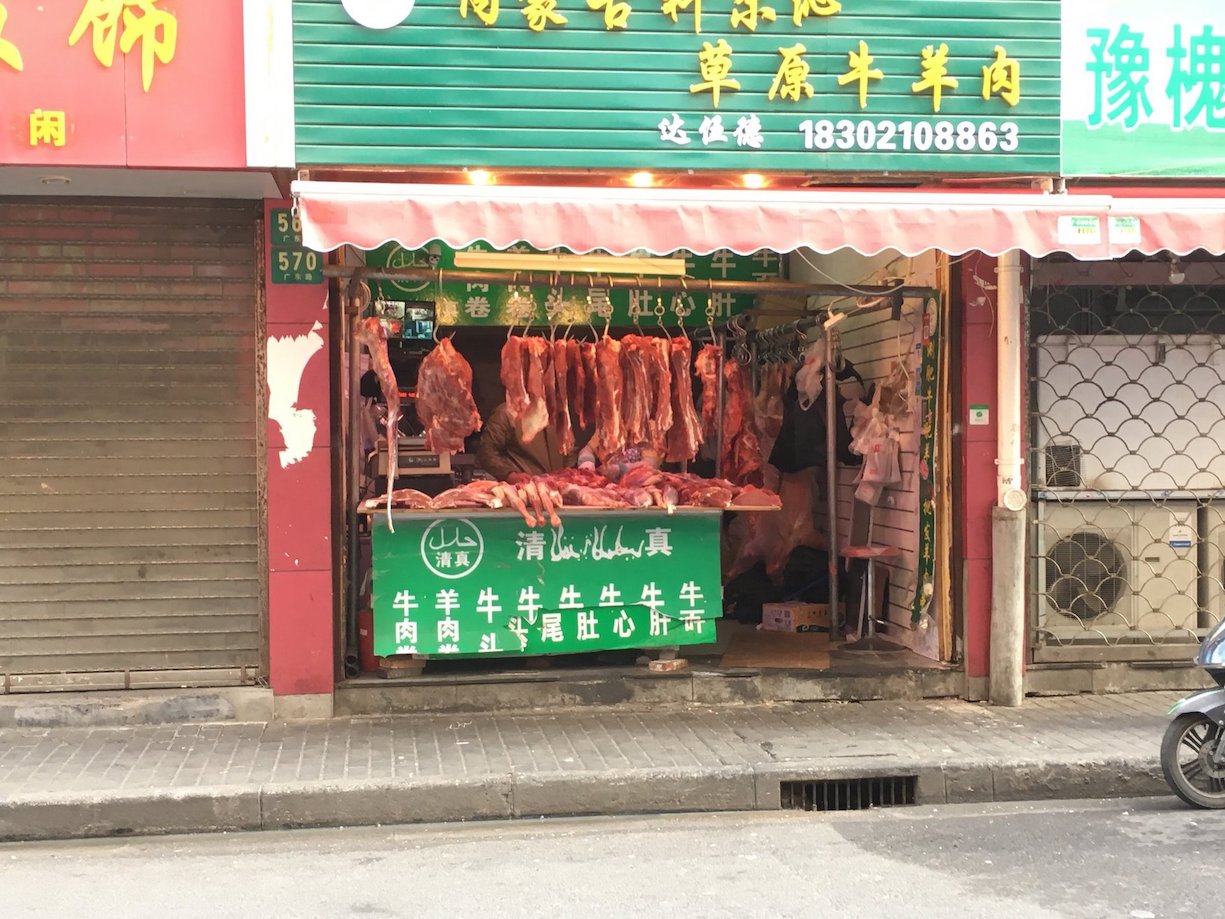 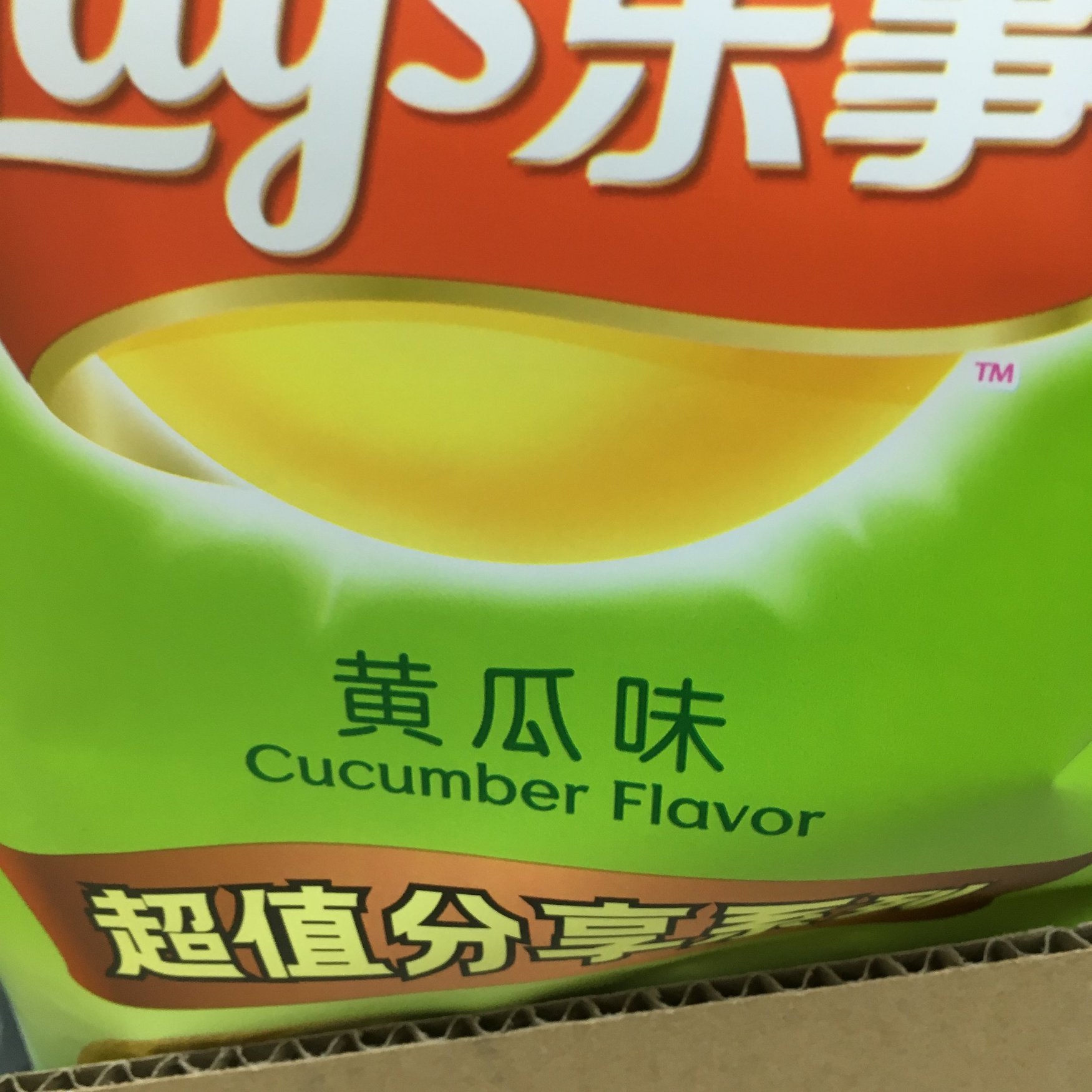 Chinese Burger
In Xi’An we went out for “chinese burger” at a local restaurant. The menu was in Chinese without translations and there were no pictures (and we really relied on pictures for ordering food), so we just hoped for the best and signaled that we wanted “two” when we got to the front of the line. It seemed like everyone was getting the same thing, and sure enough, they just gave us two of the sandwich everyone else seemed to be getting (presumably there were options or variations, but we had no idea what they were). As it turns out, a chinese burger is a toasted buns with chopped up pork - sort of like pulled pork, but with a lot more pieces of fat, including some pieces that are just fat. Not sure I’d get it again… 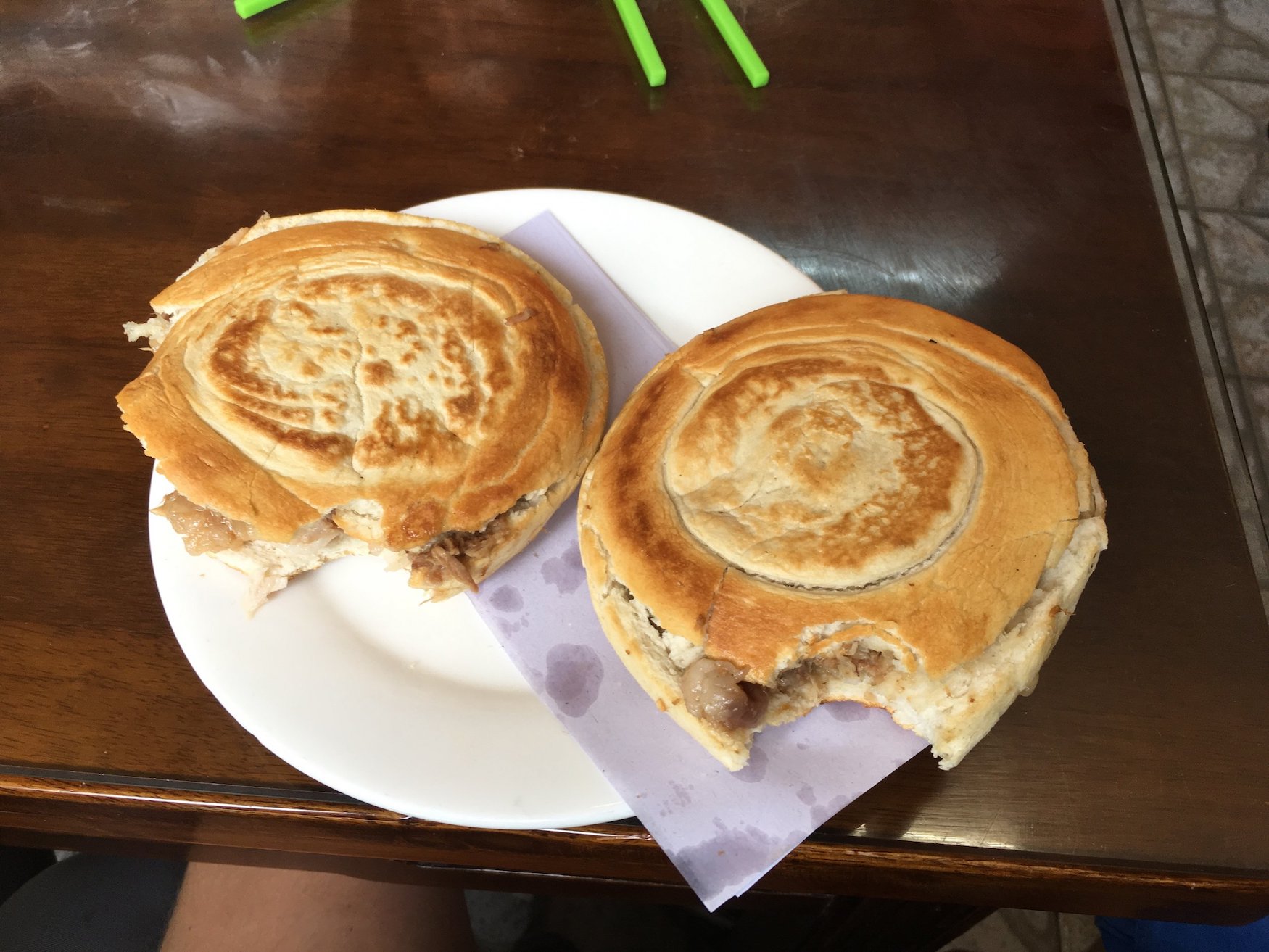 American Fast Food :  In the major cities there were McDonald’s and KFC restaurants everywhere. McDonald’s wasn’t a surprise, but KFC? Who knew China would be so into American fried chicken? We stopped in to find out what the China versions were all about and learned a few things: (1) McDonald’s has a burger with a black bun. Can’t explain why, and it doesn’t taste much different than a normal bun, but apparently it’s popular. (2) KFC doesn’t serve any vegetable sides (see ‘Meat everywhere’ above) and the ‘corn’ is actually corn mixed with mayonnaise. Not a welcome surprise. Lastly, in case you were wondering, there is Taco Bell. 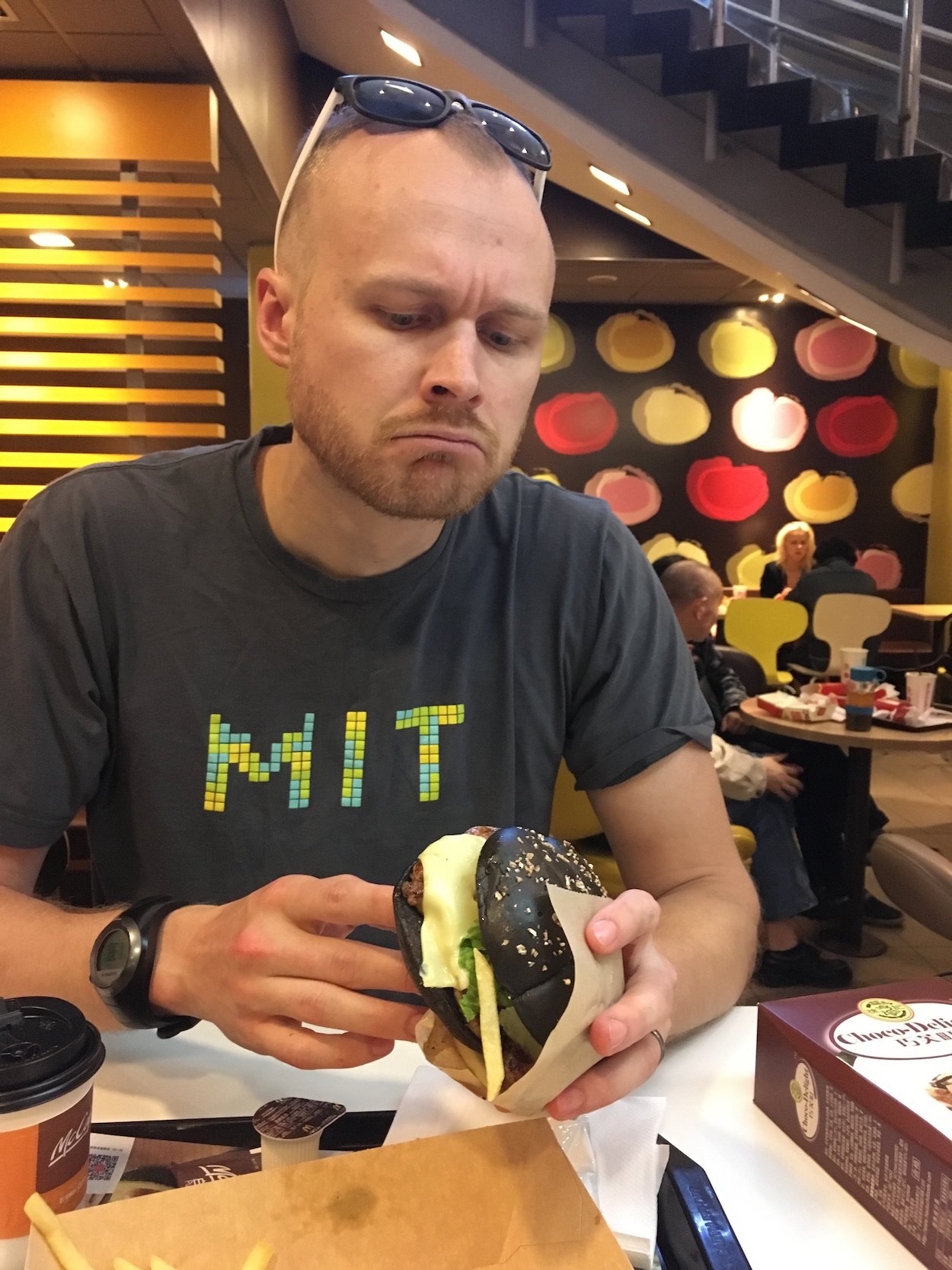 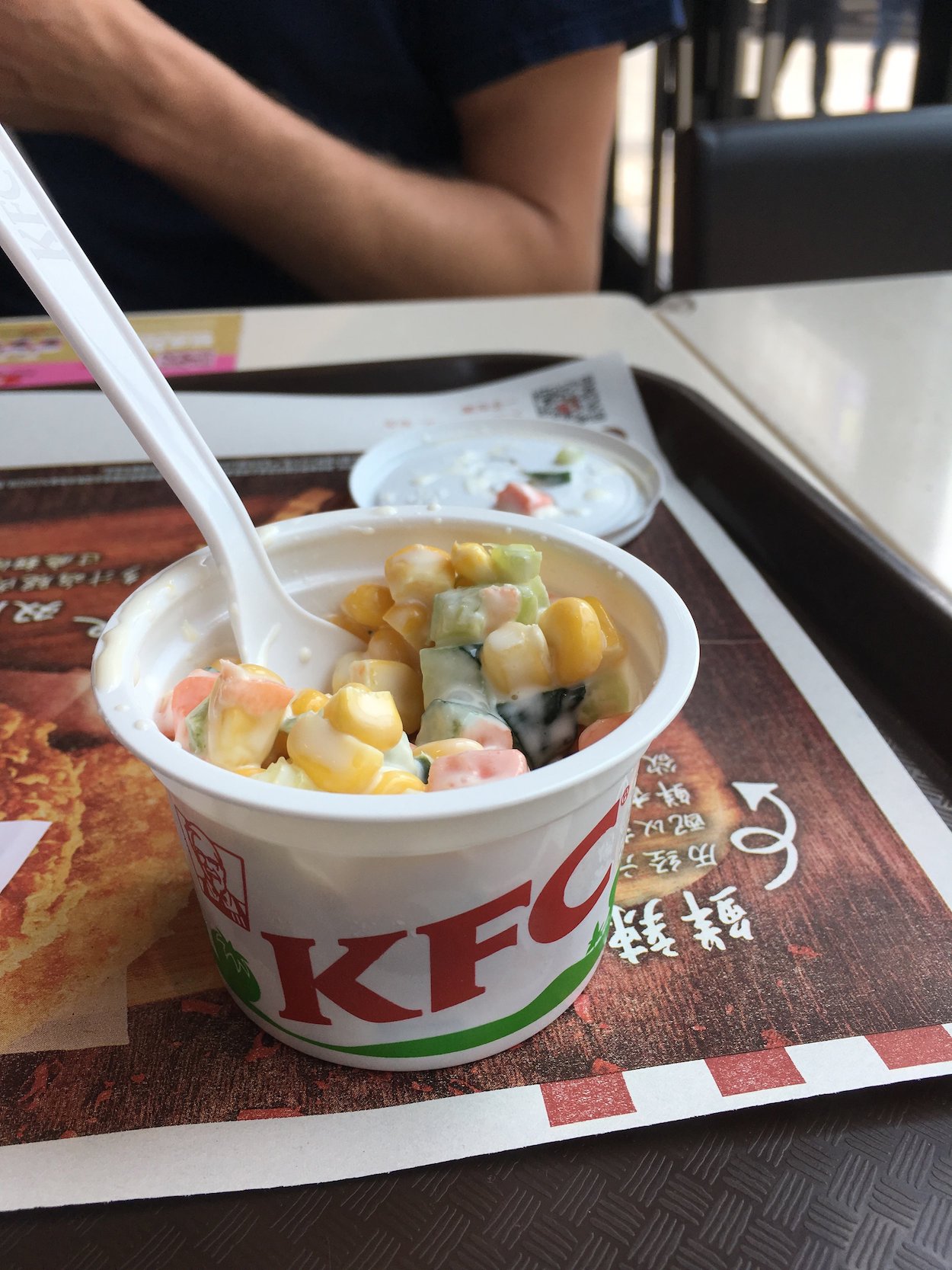 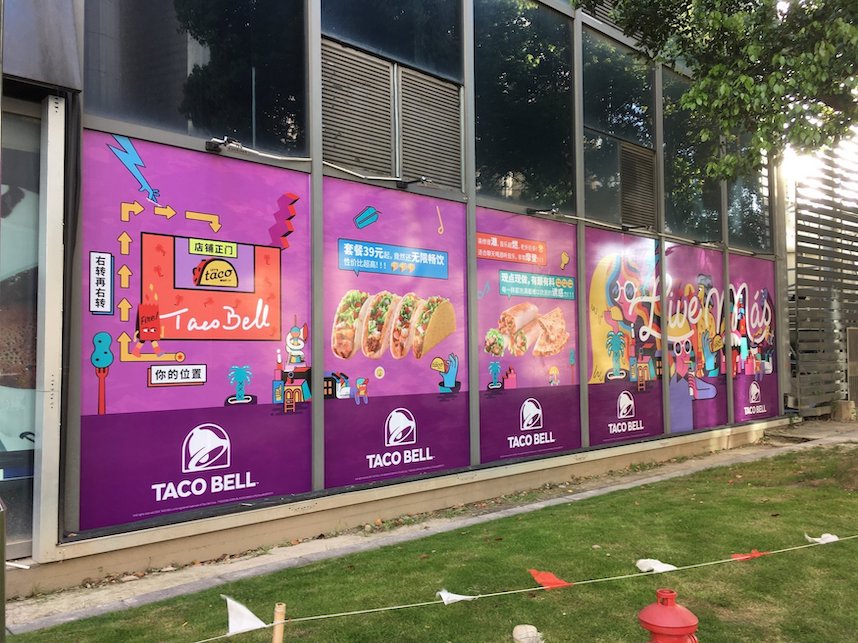 All in all, I’m a fan of traditional Chinese food, though I tend to go with the veggies and not the meat (or in many cases, the whole fish, whole chicken, whole duck, etc.). Below are a few other pictures of delicious or interesting foods we saw while in China. 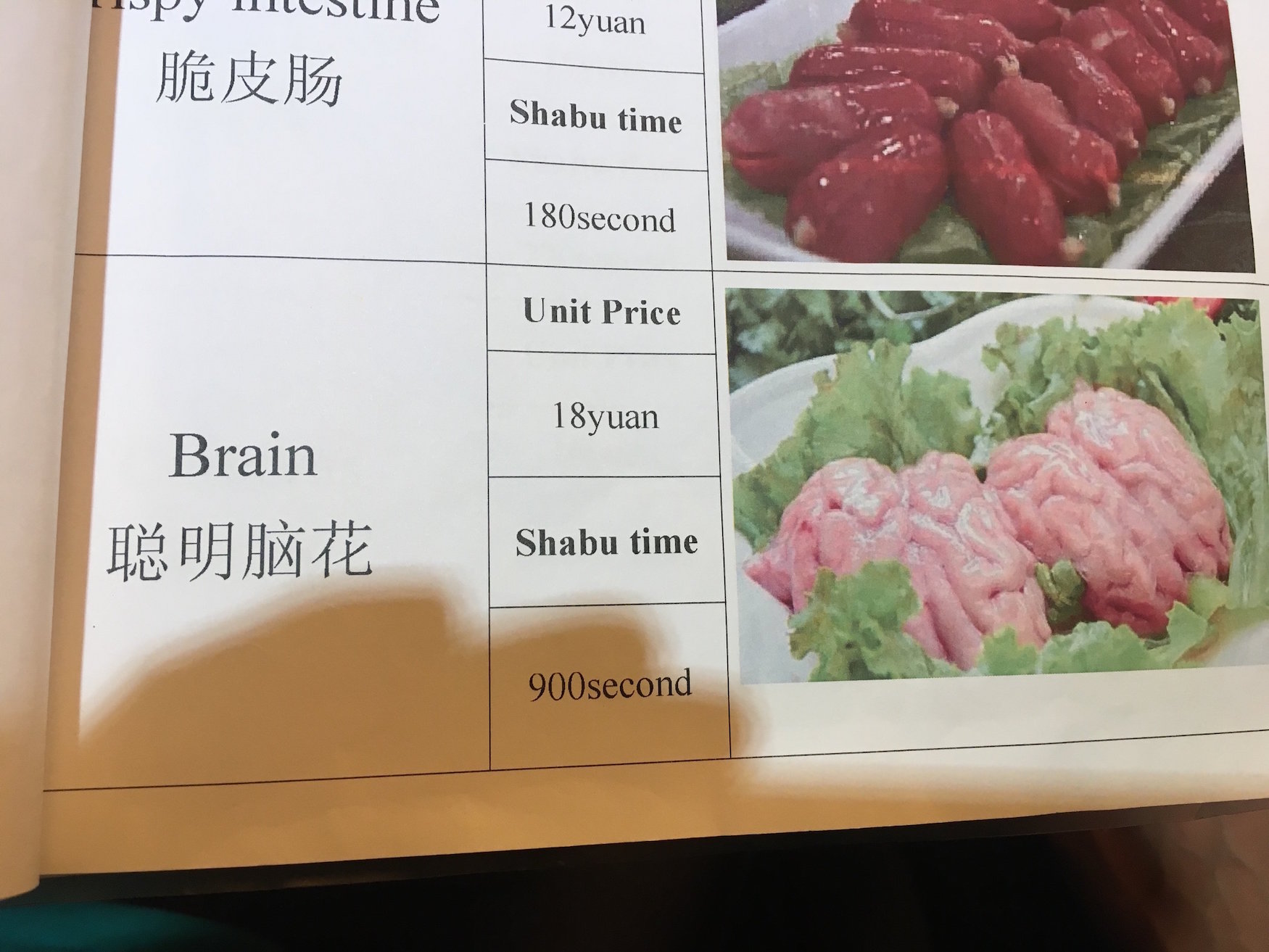 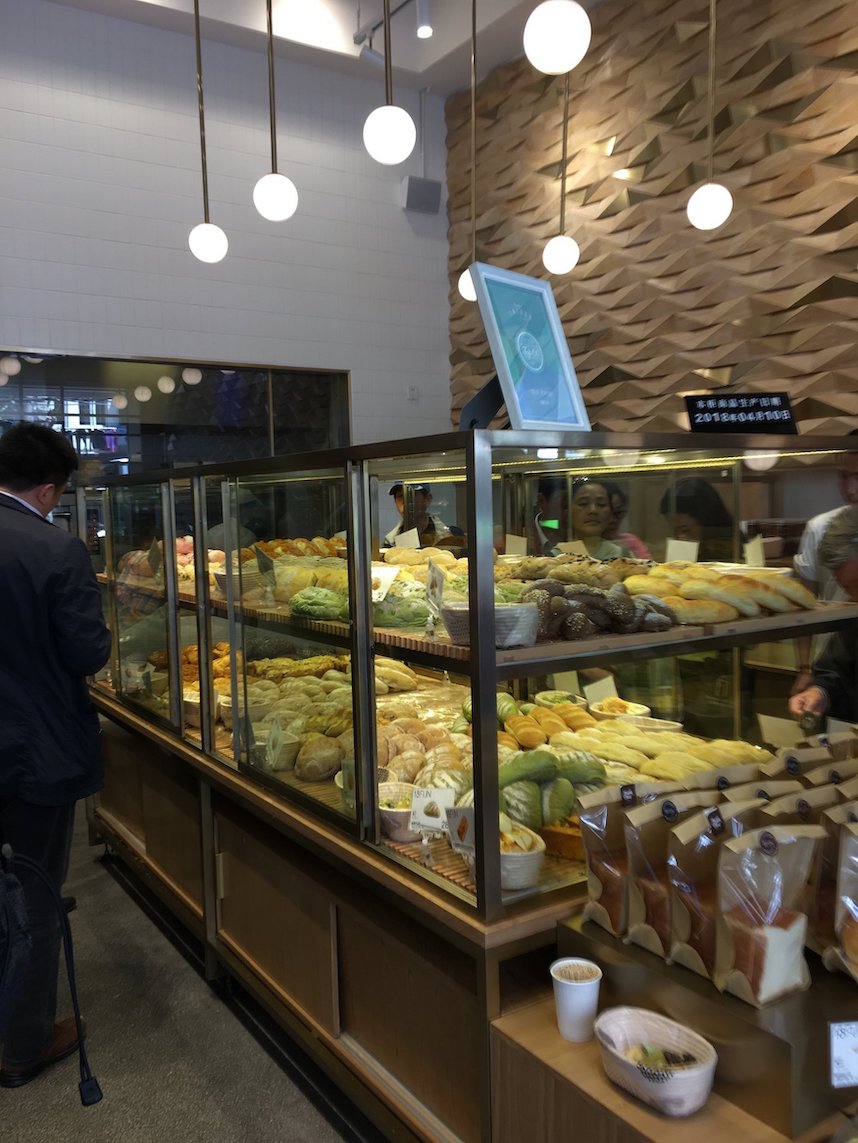 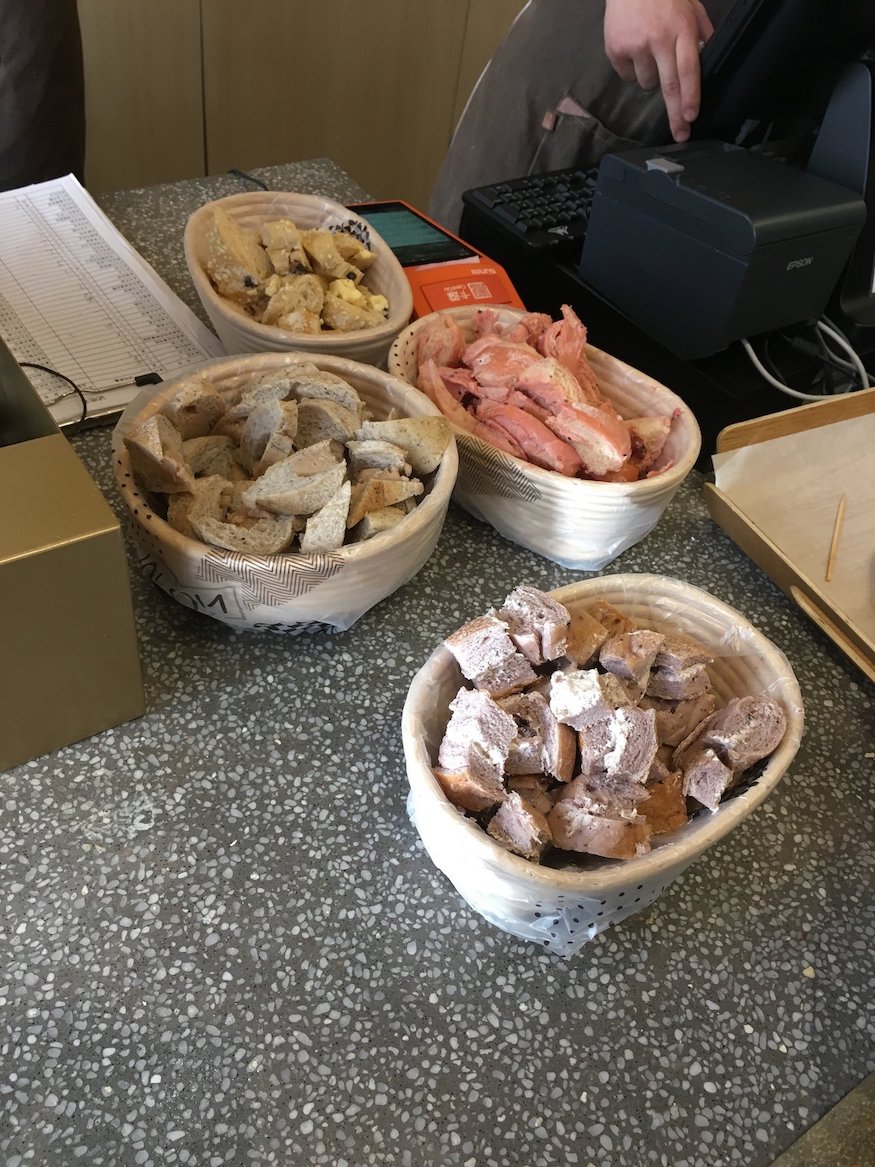 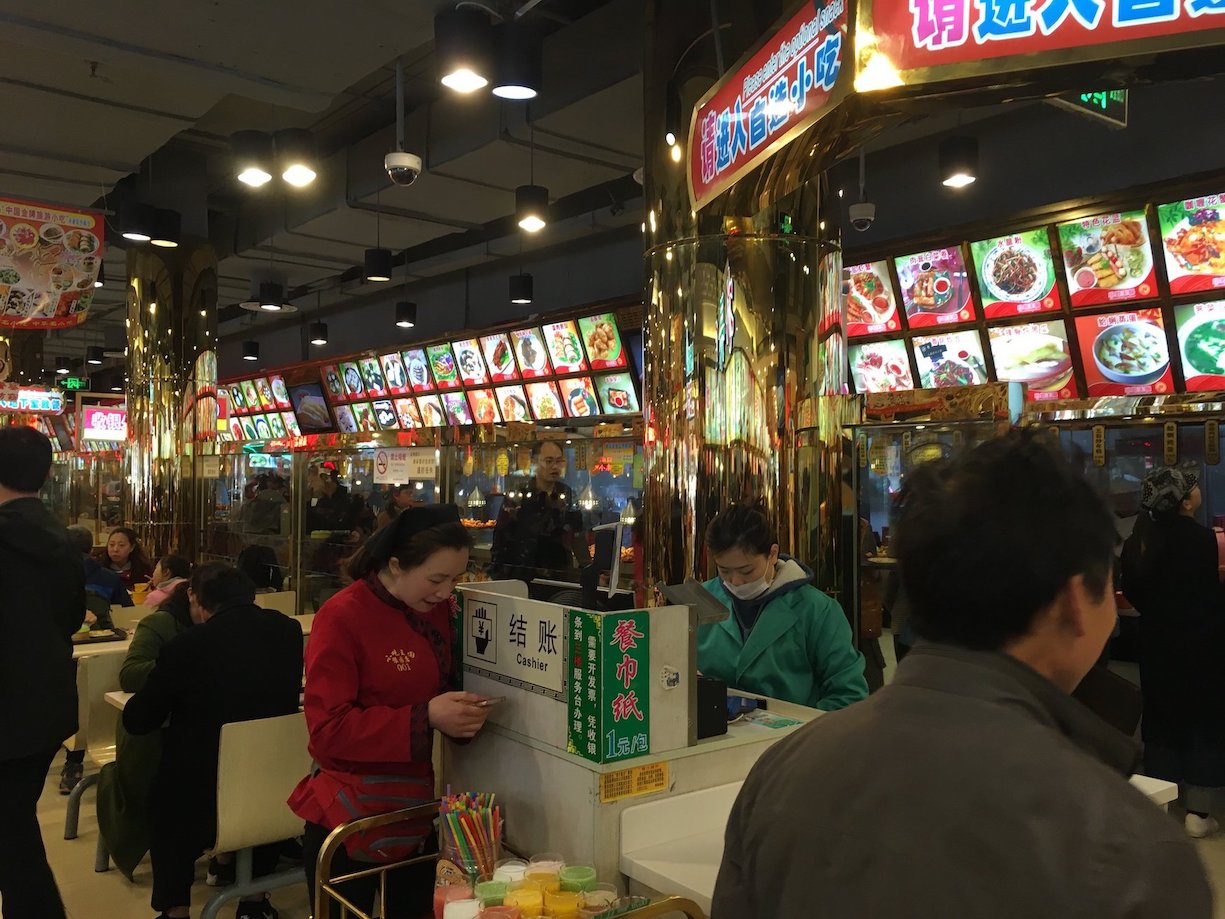 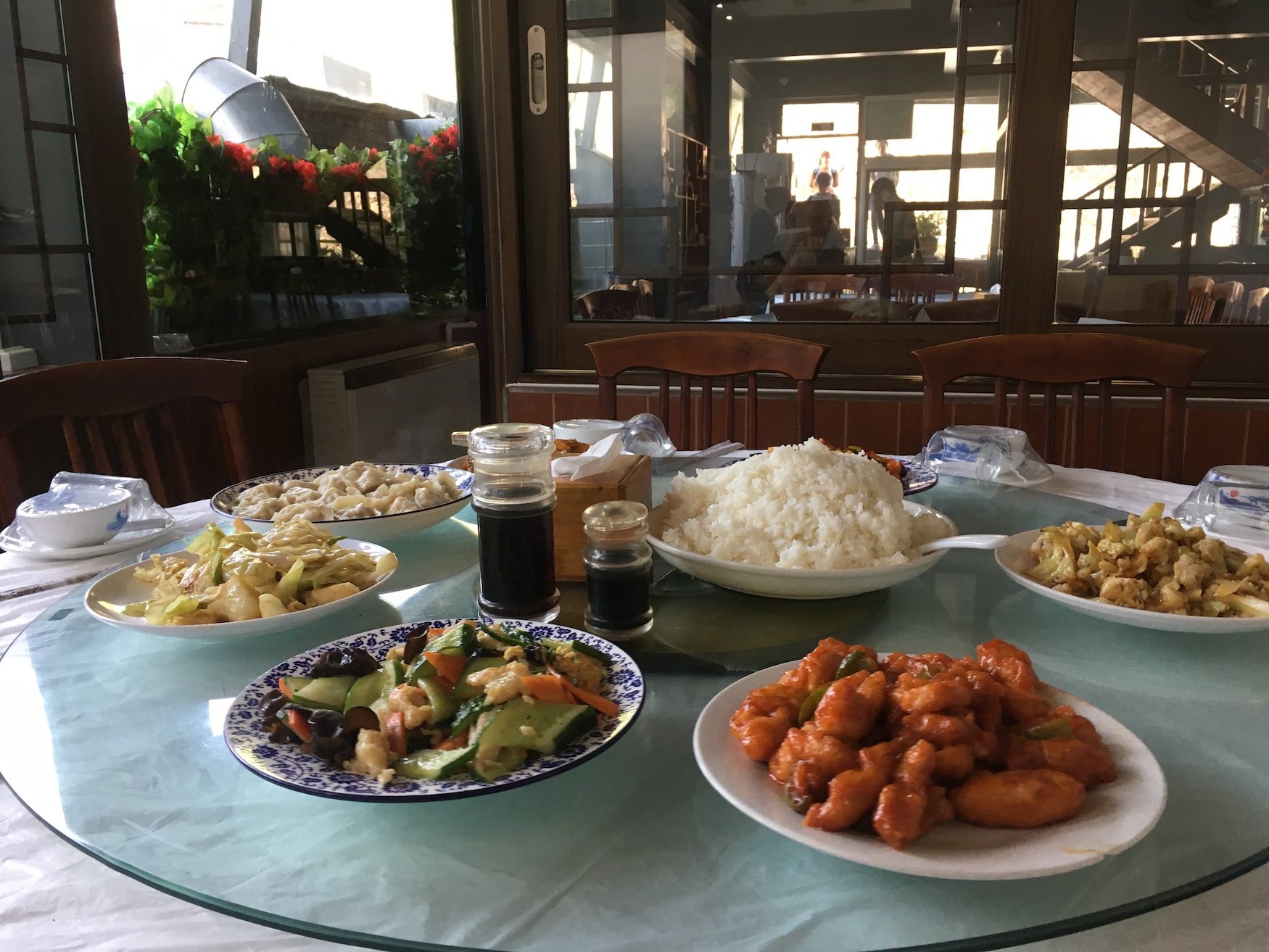 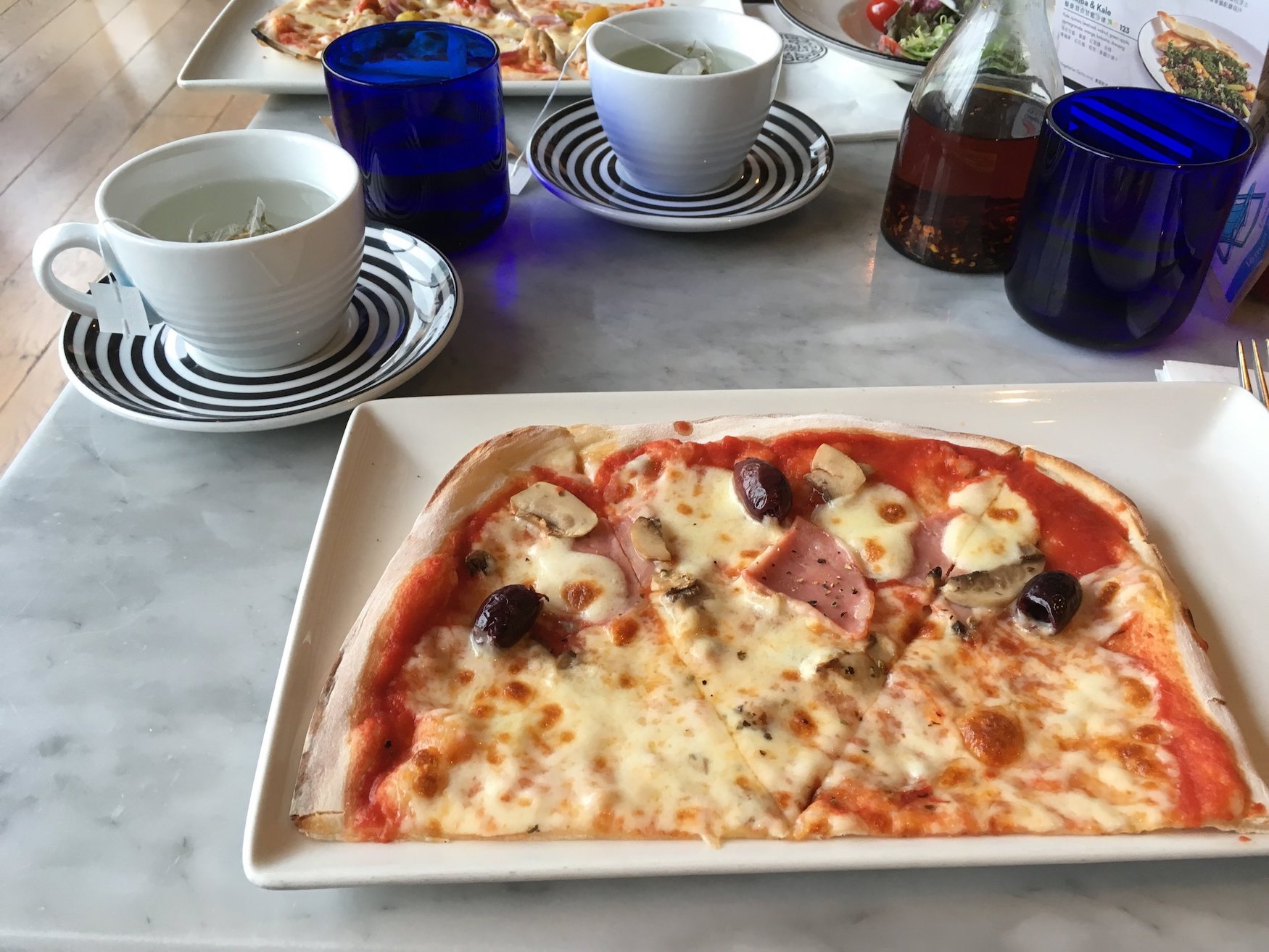 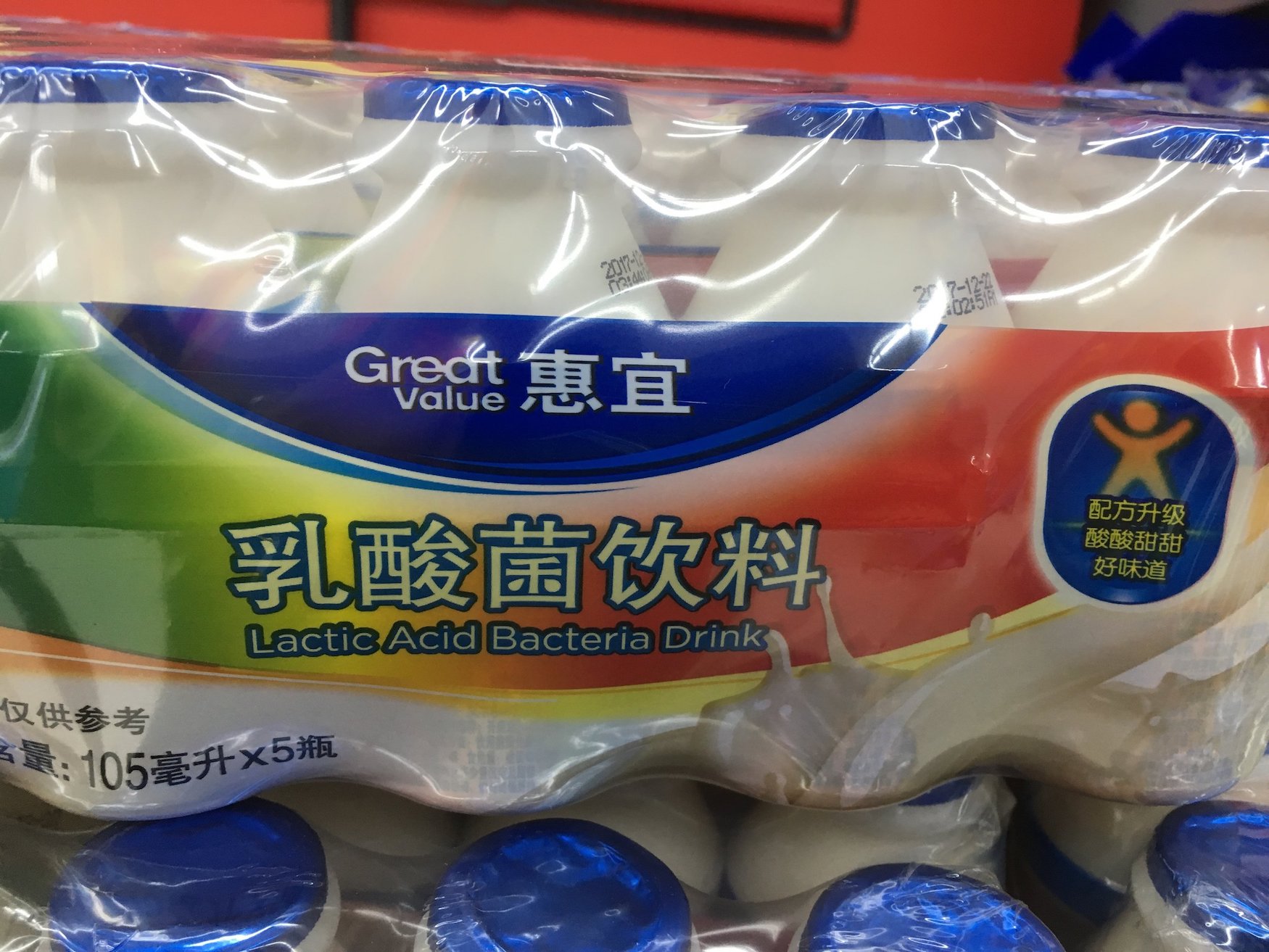