On April 5th we finally left home for our international adventures! We spent about two weeks in China to start off the trip, visiting Shanghai, Beijing, Xi’an, and Chengdu. China was our first destination because of the need to get visas ahead of time - in order to get the visas, you need both a flight in and a flight out. Since we don’t have a full itinerary planned for the next few months, it just seemed easiest to start with the location that required the most planning.

The flight to China was LONG. We flew SJC > LAX, and then directly from LAX to Shanghai. Wifi on the plane was a big perk, but 14 hours is a long time to sit anywhere doing anything. My favorite part of the flight was the “mid flight snack”, which was pizza AND ice cream. Who was it that decided that all passengers - as a “snack” - should get both a personal pizza and a serious ice cream treat bar? Well, I’m not complaining. Way to go Delta.

Our final obstacle to arriving at our Airbnb in downtown Shanghai was the actual process of getting there. We were nervous that taxis would rip off the English-only tourists and the subway was a long ride, so we decided to try China’s version of Uber, Didi. This was our first experience with just how hard it is to get around China while not speaking Chinese. We managed to request a Didi (not sure if “requesting a Didi” would be phrased the same way as “requesting an Uber”…), but then had all kinds of trouble finding the car at the airport because we couldn’t communicate where we were and we couldn’t understand where the driver was waiting for us. After a few tries, we found a patient driver who waited about 20 minutes for us to find him and finally took us downtown.

The time change and jet lag were a struggle for our first few days. One day, we came home for an afternoon nap, and ended up sleeping from 3pm to 9pm. After that, we realized that we needed to make an effort to get ourselves back on track and limit our napping to reasonable, shorter periods of time. (About 10 days into the trip, I’m still waking up around 5am - 6am every morning - a feat I wish I could accomplish back home!)

We spent our days in Shanghai exploring the wide variety of parks, markets, and restaurants the city has to offer (and a special thanks to our China-traveling friends, John and Annabeth, who gave us wonderful recommendations of things to do and places to go!). I came into China with a clean slate and unbiased perspective of each city - and was unsure of how I would feel about each place. I loved Shanghai. Shanghai is sometimes compared to NYC in the states, but I found it to be much more pleasant than NYC - generally cleaner (the streets, not the air), easier to navigate, and much less overwhelming. Below are a few of our Shanghai-lights! 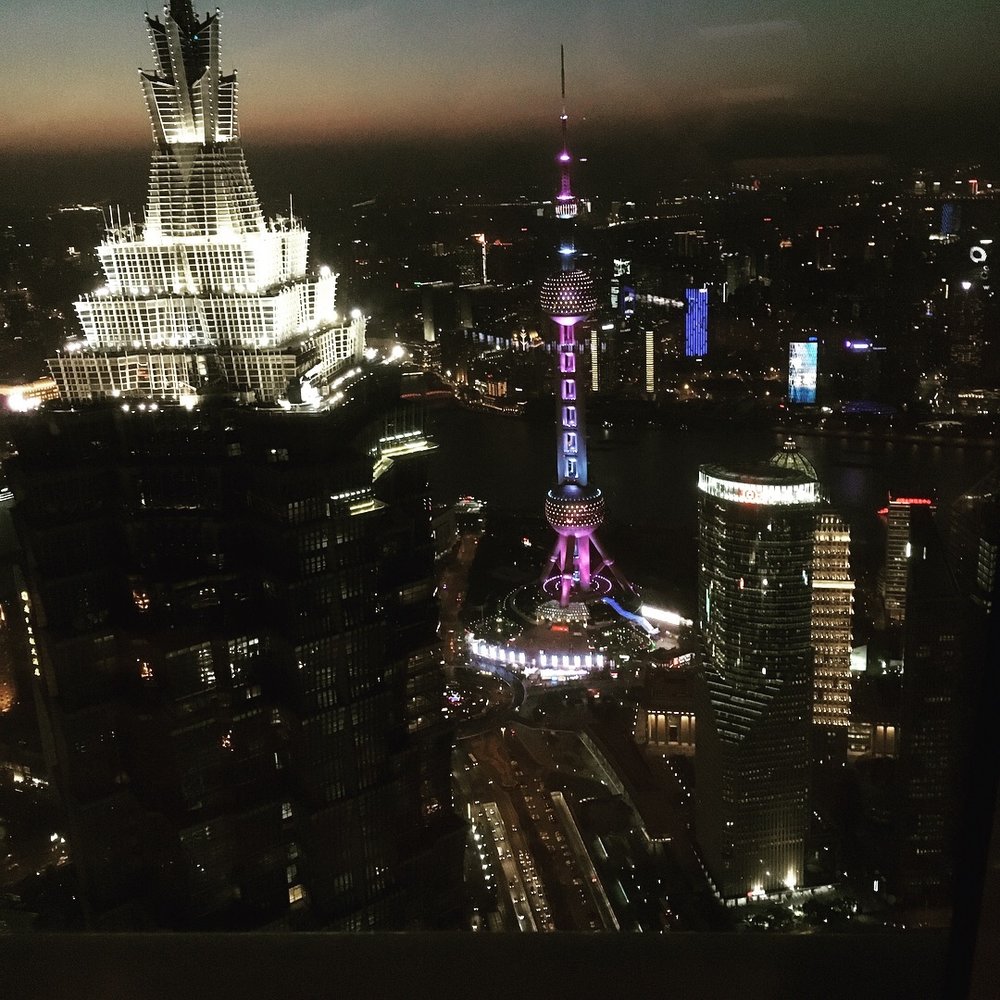 One night, we visited the Park Hyatt hotel and grabbed drinks at their bar on the 87th floor. We were lucky to get a table right next to the window, where we got to enjoy this view for a while. The picture doesn’t do it justice - the city is pretty much a lights show from above each night. Many buildings along the river are lit up in constantly changing colors and patterns, and it’s really fun to watch. 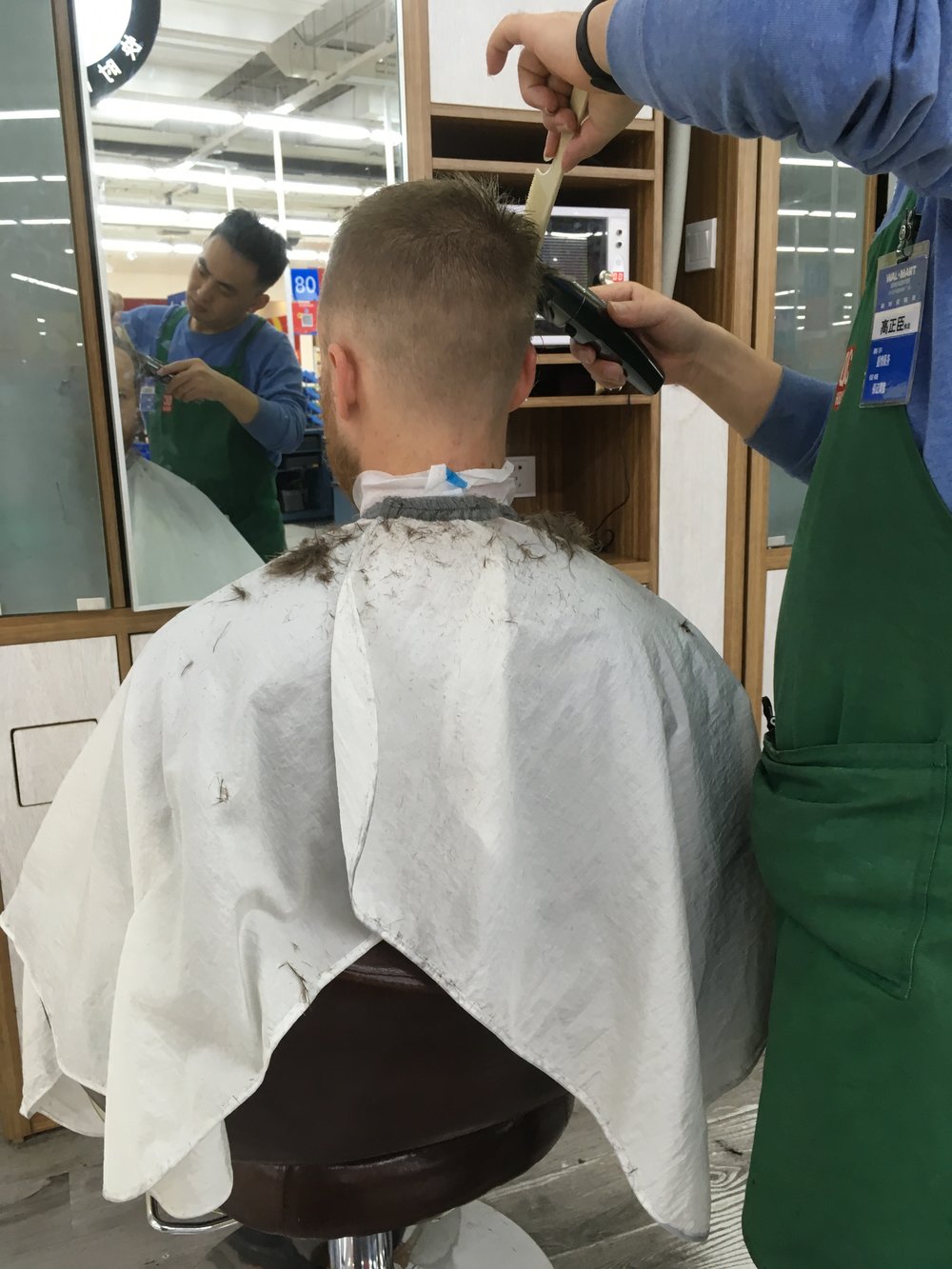 Sid was in dire need of a haircut. This probably should have been taken care of before we left the US, but alas, we were in China and Sid’s hair and beard were in full unemployment mode. We stumbled upon a barber shop in a mall that offered haircuts for 15rmb, or $2.50 USD. Easy decision. Now Sid has a China haircut! 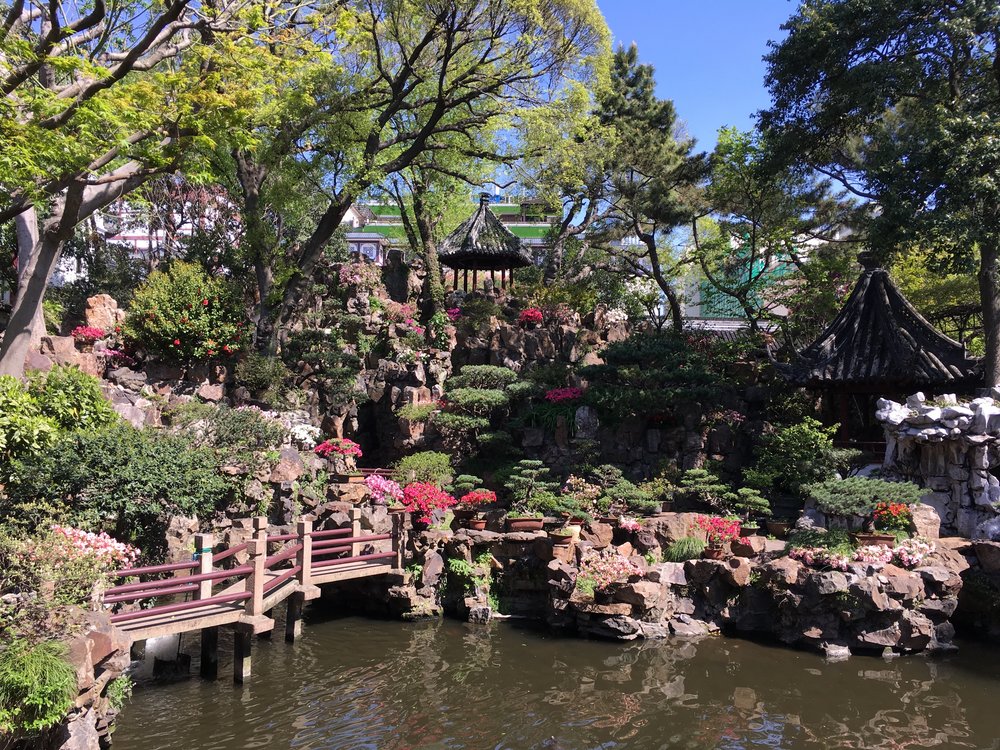 The Yuyuan Gardens were one of a number of gardens and parks that we visited in Shanghai. Since we were waking up before 6am every day, we often got an early start and were walking through the parks before rush hour traffic. It was fun to see all of the activities that went on throughout the day - lots of card games, exercise groups doing tai-chi, and people playing music and dancing.

For each city/region, we’re going to do a set of ratings. Since we’ll be going to lots of places, the pros and cons might get foggy and I’d like to be able to look back and remember which spots we thought were really awesome and which we weren’t so excited about.  No guarantees that these ratings will be consistent (or even that the categories won’t change over time), but here is our Shanghai Review (all on a 1 [worst] - 10 [best] scale):

Would recommend visiting to a friend:

Would consider living there for an extended period of time (6+ months):